Home Table of Contents Tax Tips Credits Deductions Refunds State Taxes Politics/Laws Tax Terms Archives
'Taxation without representation is tyranny'
& 12 other tax quotes for the Fourth of July
Happy 4th of July 2016! Time to fire up the grill for some tax-free hot dogs and hamburgers

The United States of America tomorrow will celebrate 240 years since independence was declared. Here's wishing all my fellow Americans a safe and fun July 4, especially since our break from Britain was based in large part on the battle cry that "Taxation without representation is tyranny."

But another important date arrived just a few days earlier. On July 1, the first of the Baby Boomers turned 70½. 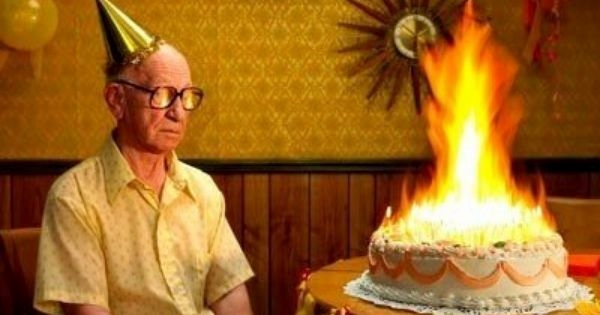 Judging by this cake's flames, this guy looks to be a bit older than 70½.

That half birthday date is crucial because it means owners of tax-deferred retirement accounts like traditional IRAs or workplace 401(k) plans now are facing, as I noted last week at my other tax blog, required minimum distributions, or RMDs.

And those mandatory retirement account withdrawals will be valuable gifts to Uncle Sam's tax coffers.

Decades of no taxes: Baby Boomers, folks born in 1946 and through 1966, were the first generation to face shifting retirement structures. Traditional IRAs were created in 1974 and were in wide use by the 1980s, as companies started shifting from defined benefit plans to defined contribution plans.

Under a defined benefit plan, the company socks away money for its workers' use after they leave. With a defined contribution plan, saving for post-work years falls mostly on workers, who must put retirement money into their own IRAs and workplace 401(k)s. The money grows tax-deferred until taken out to fund golden years' activities.

Time to tap retirement money: The RMD rule takes care of that, requiring deferred account owners to start taking out some money every year starting the year that they turn  70½. In the half birthday year, an older account owner can push the initial RMD to April 1 of the next calendar year.

That, however, means that in that next year, they'll have to take two RMDs. The first by the first day of April is for hitting the birth milestone the year before and then the RMD for that year, which is due by Dec. 31. So do the math to see whether it's better for you to wait and withdraw -- and pay taxes -- twice or pay up once this year.

Remember, too, that although your traditional IRA and 401(k) money likely is invested, it's still taxed at ordinary income tax rates, which range from 10 percent to 39.6 percent. Those rates could be higher than the capital gains rates that, depending on your adjusted gross income, are 15 percent or 20 percent .

Whatever the tax rate, the Treasury is looking forward these first Baby Boomer RMDs. Even if the $14 trillion is taxed at the lowest 10 percent ordinary income tax rate, that $14 trillion will mean $1.4 trillion in taxes. And not every account holder will be in that lowest tax bracket.

Giving it away: If you have to pull out some money from your IRA or 401(k) or similar tax-deferred retirement account but don't need it to live on, put it back into a taxable account.

Or you also can give it away. Thanks to last year's tax extenders bill, known as the Protecting Americans from Tax Hikes, or PATH, Act of 2015, included a provision that allows folks age 70½ to directly roll up to $100,000 from that retirement account to an IRS-qualified charity.

You won't get a tax deduction for your gift, but the directly donated money will let you meet your RMD amount and it won't be taxable to you.

Fighting refund fraud in 2017: Also over at Bankrate Taxes Blog last week, I looked at steps the IRS will take next filing season to help reduce the persistent problem of tax identity theft and related refund fraud.

I usually post my additional tax thoughts at Bankrate on Tuesdays and Thursdays. And I usually post highlights of those items here at the ol' blog the following weekend. Although tomorrow's Fourth of July holiday makes this a long weekend, I wanted to get this out of the way now, so that the hubby and I can enjoy the fireworks tomorrow.

All y'all have a great Independence Day, too!