It's a Christmas miracle! Weeks are left in 2015 and Congress has reached a deal on the 50+ tax breaks known as extenders. 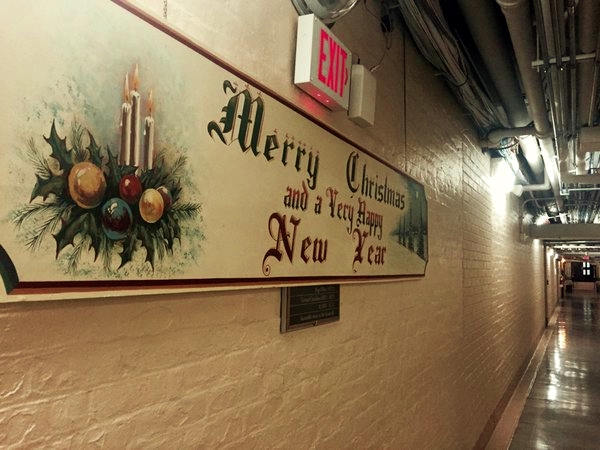 Holiday greetings in the hall leading from the room in the Capitol basement where House Republicans met late Dec. 15 to learn of agreement on omnibus spending and tax extenders bills. Photo by Craig Caplan, C-SPAN Capitol Hill producer, via Twitter.

For those of us in the tax world, waiting for action in recent years on this group of technically temporary tax breaks has become a holiday tradition. A bad holiday tradition, to be sure, but one nonetheless.

Our anticipation as to which laws Representatives and Senators would renew and for how long was greater than the wait for Santa.

Soon, however, we won't be worrying about whether Congress will come through on some popular tax deductions and credits.

The PATH to permanent tax breaks
The Protecting Americans from Tax Hikes, or PATH, Act of 2015 makes 22 tax extenders a permanent part of the Internal Revenue Code.

Yes, I know Capitol Hill's dictionary is somewhat different from Merriam-Webster's. Permanent doesn't mean forever to folks in Washington, D.C. Maybe it's because of the nature of elections.

But whatever the reasons for the definitional differences and for our practical purposes, permanence for now (and until it's revoked) means that we won't have to put some popular tax moves on hold while Congress decides their fates.

See, Congress is sentimental about holiday traditions after all. We will get to do this again next December, although the tax extender wish list will be a bit shorter this time in 2016.

So exactly who wins, loses or stays essentially the same under PATH? Here's my take.

Winners: Individual taxes
On the individual taxpayer side, the big winners are parents, teachers, well-off older IRA owners and residents of no-income-tax states.

Let's start with families. The $1,000 per qualifying child tax credit is a great tax benefit, a dollar-for-dollar reduction of a filer's tax liability. It's even better for some parents who qualify for the additional child tax credit. This is a refundable credit, meaning it can get you a tax refund if you don't have any tax bill for it to erase. This refundable portion is equal to 15 percent of earned income in excess of a threshold dollar amount. Under PATH, that amount is set permanently at $3,000.

The part of the Earned Income Tax Credit, or EITC, which provides added tax assistance to low- and middle-income workers also was made permanent. Specifically, the increased EITC amount for filers with three or more kids, along with the easing of the EITC marriage penalty are now permanent.

And folks sending kids to college also won't have to worry about the previously scheduled 2017 expiration of the American Opportunity Tax Credit, or AOTC. This education tax credit, created by President Obama as part of the 2009 stimulus bill, now permanently replaces the Hope credit. The AOTC provides a $2,500 credit, a portion of it refundable, for qualifying costs during the first four years of college. This makes the prez, who has pushed for AOTC permanence from the get-go, a big winner, too.

Also winning thanks to new permanent tax code status under PATH are:

Winners: Business taxes
On the business side, there were a couple of welcomed permanent provisions.

The Section 179 provision covering small business expensing amounts are now fixed at a $500,000 limitation and $2 million phase-out. Plus, beginning in 2016, those amounts are indexed for inflation. Also, air conditioning and heating units placed in service starting next year are eligible for expensing, and the $250,000 expensing limitation cap with respect to qualified real property is eliminated starting in 2016.

The research and development, or R&D, tax credit also made it permanently into the business portion of the tax code.

The fact that so many extenders are now (or will soon be) permanent also makes winners of new Ways and Means Chairman Rep. Kevin Brady (R-Texas), who said that was one of his goals.

House Speaker Paul D. Ryan also gets a win early in his leadership tenure, since this and the accompanying omnibus spending bill were pulled together in a relatively smooth manner.

And all these popular changes also make the other Representatives and Senators who ultimately vote for them winners in the eyes of their affected constituents.

The majority of folks in this category are those who saw their favored tax breaks approved retroactively for 2015 and then just for the upcoming 2016 tax year. They include struggling homeowners, horse and auto racing owners, Hollywood types and some Caribbean island producers of rum.

The tax breaks that affect these folks (and a few others) and which will end again on Dec. 31, 2016, include the:

With this many tax breaks coming up for renewal in the next 12 months, PATH also makes winners, to a degree, of the lobbyists who'll be pushing for the continuation of the provisions.

Losers
Finally, there are the losers.

Deficit hawks, who this time count some Congressional Democrats among their usually politically conservative numbers, are not happy with the tax bill.

The overall cost of the extenders deal is $680 billion over the next 10 years. When interest is included, the Committee for a Responsible Federal Budget, projects the tax bill will cost about $830 billion over the coming decade.

And the president, who got a win with his education tax credit being made permanent, took a hit with PATH's inclusion of a two-year moratorium on the medical device excise tax that was created as part of the Affordable Care Act.

The $1.1 trillion omnibus spending bill also will delay Obamacare's so-called Cadillac tax on high-cost company health care policies. The 40 percent levy was scheduled to take effect in 2018; that start date will be pushed to 2020.

Many see the Cadillac tax provision, which is an area of rare bipartisan, and negative, agreement on the president's signature piece of legislation, as an indication that the tax is in trouble. The tax opponents promise renewed efforts to repeal, not just delay, it.

Still, the White House says the two ACA tax delays will have only a "minimal" effect on the health care law. Overall, the Administration praised the tax and spending measures.

Not a done deal
Of course, neither the tax extenders nor accompanying budget plan is a done deal. Both still must clear both Congressional chambers and be signed into law by Obama.

And since Uncle Sam runs out of money today, the House and Senate must first pass another continuing resolution to keep the government running while the final fiscal votes are taken. The House passed the latest temporary funding measure, which runs through next Tuesday, Dec. 22, earlier today by voice vote. The Senate is expected to do the same sometime this afternoon.

Then it's focus time on getting the extenders and omnibus bills approved by the 22nd so that Capitol Hill can close for the holidays.

When that happens, we're all winners!

Good point, Paul, about Congress not dealing with the 2016 expiring items next year. It will be a lame duck Congress with a new president coming in, so you are likely correct that the House/Senate won't do anything. But I'll probably hold an extenders party next December just to watch them die again. :)

Thanks for the great write-up. I don't think we will see any activity on the extenders next year. The provisions are good through (at least) 2016 - so Congress isn't forced to act until the end of 2017. (When they will make them retroactive for 2017...)

i just wish they (Congress-Senate & Representatives) would do their job on a proactive basis instead of leaving everyone hanging for months & years. I'm glad that many were made "permanent".