Everyone loves getting a bargain. What they love even more is getting that bargain at the expense of the tax collector. 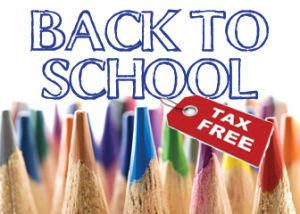 State sales tax holidays were made for these folks.

You'll find a list of the current tax holidays a bit later on this page. But first, a quick look at these events.

What and why tax holidays: Tax holidays are a temporary reduction or elimination of a tax.

States and other participating tax jurisdictions lose money on sales tax holidays. That's why occasionally state lawmakers suspend a holiday or tweak it in order to ease the bite to the state treasury.

But they are popular with shoppers, or as politicians refer to them, possible voters.

Retailers also tend to like tax holidays even though the businesses must deal with some short-term administrative hassles. At least technology has made that easier.

And when people walk into a store for a tax-free item, there's always the chance that, as noted in my tax holiday shopping tips blog post, they'll buy a few other things, too.

Tax holiday history: The first sales tax holiday was way back in 1997. The year before, New York legislators created a week-long statewide sales tax holiday that took place the following January. Local Empire State governments were given the option to participate and most declined.

But the idea caught on quickly in other states.

In recent years, around a dozen or more states offer the tax-free days for selected purchases. In years when states felt especially flush, as many as 20 or more states held the holidays.

And a few hold multiple tax holidays throughout the year.

Back-to-school connection: Most tax-free holidays, however, are held in late summer and are tied to retailers' annual back-to-school sales. That's the case even when the tax-free items aren't necessarily connected to classwork or educational endeavors.

Each year, a few states kick off the annual tax holiday season in late July. Most fall during early August, generally that month's first weekend.

And a few states, likely those where schools open near or after Labor Day, push their sales-tax-free events later into August.

Regardless of when the tax-exempt days fall or what's sold sans sales tax, check out the event if your state participates. It could save you a few dollars.