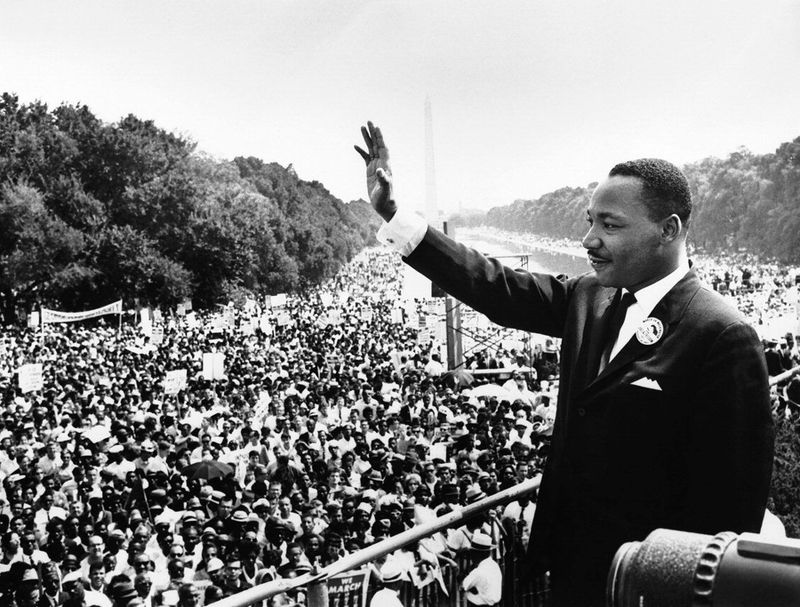 The Rev. Dr. Martin Luther King in Washington, D.C., in 1963 where he delivered his "I Have A Dream" speech. (Photo via Wikimedia)

On this Martin Luther King, Jr. Day federal holiday, the focus once again is on public service. It's a way to honor The Rev. Dr. King's commitment to helping those who need it the most.

It's also a time when we rightfully recall the civil rights leader's most famous speech, his delivery of his "I have a dream" vision of equality in Washington, D.C., on Aug. 28, 1963.

But King also knew that hard, practical work was needed to reach that dream. It included the importance of education in advancing the condition of minorities and in eliminating long-standing societal prejudices.

King also spoke about financial equality and how it can help eradicate poverty. "The most critical problem in the other America is the economic problem. By the millions, people in the other America find themselves perishing on a lonely island of poverty in the midst of a vast ocean of material prosperity," said Dr. King in his The Other America speech in 1968.

Income inequality is still an issue decades later. And now, we're beginning to look at inequality in the U.S. tax code.

Is the tax code racist? America has a major racial wealth gap that is driven in part by the way the federal tax code is written, according to Dorothy A. Brown, a professor of law at Emory University and the author of "The Whiteness of Wealth: How the Tax System Impoverishes Black Americans — and How We Can Fix It."

Treasury and the Internal Revenue Service don't track tax statistics by race, but Brown says there are several ways in which the Internal Revenue Code benefits white households, while Black households end up paying higher taxes. Brown also tackles the disproved welfare queen trope. This fiction of Black people taking services and not paying taxes is widespread, and is the very backbone of austerity economics.

In an interview with the Center for Public Integrity, Brown cites tax breaks for married couples and homeowners, as well non-government data showing poorer, more rural and diverse areas where the Earned Income Tax Credit tends to be claimed are subject to frequent audits.

Brooklyn Law School professor Steven Dean agrees. In his paper Filing While Black: The Casual Racism of the Tax Law, Dean also notes that the five most heavily audited counties in the United States are Black and poor.

"The tax law’s race-blind approach produces bad tax policy," Dean adds, noting that his paper uses three very different examples to show how failing to openly and honestly address race generates bias, and how devasting the results can be. "Ignoring race does not solve problems; it creates them," he writes.

"Nobody of good conscience wants there to be a race-based penalty or a discount on taxes. Everybody ought to pay their fair share, and everybody ought to have a fair chance to get ahead. In practice, the U.S. tax code doesn’t always work that way," said Chairman Ron Wyden (D-Oregon) in his opening remarks.

But, added Wyden, "If America's busted old tax code excels at anything, it is rewarding those who are fortunate enough to already have wealth. The lucky few with the top incomes can go years deferring their taxes, paying what they want when they want to. On the other hand, there is no deferral for a black nurse who pays taxes out of every paycheck, or a Latina small business owner who pays taxes quarterly."

Ranking Minority Finance Member Sen. Mike Crapo (R-Idaho) acknowledged that there are questions of whether the tax code by itself leads to differing impacts across race, gender, age, or geography. However, he pointed to underlying income, wealth, asset-holding, or job type disparities as additional contributors.

"Underlying causes of these disparities are not entirely clear, since causality is difficult to establish. As a result, there are different views. Some views focus on government policies, while others stress inequities in opportunities for education and asset building, along with changing patterns of family formation and institutions like marriage," added Crapo, noting that the hearing's witnesses will provide perspectives on the income tax system, barriers to opportunity, policy solutions and issues that we should consider, along with economics.

State and local issues: Our federal tax system isn't the only problem with racial bias issues. State and local tax policies interact with historic and current racial inequality in important ways, according to an Institute on Taxation and Economic Policy (ITEP) report on taxes and racial equity. In the preface to the report, its authors say —

"Revenues raised through taxes are vital to funding public investments in education, health, and the safety net, all of which can help combat inequality. But some state tax systems exacerbate racial income inequality by taxing low-income people, a disproportionate share of whom are people of color, at higher rates than other families. Such regressive tax structures can make racial income inequality worse as incomes become more unequal after state and local taxes. A progressive system for raising revenue, however, can narrow racial income gaps by asking more of families with the highest incomes, who are predominately white. When state policymakers leave immense racial and ethnic income inequality unaddressed in state tax codes, they solidify that inequality."

What can be done: Some have proposed ways they say the racial bias in the tax system can be corrected.

An article for the Center on Budget and Policy Priorities examines How the Federal Tax Code Can Better Advance Racial Equity. The authors say —

The federal tax code does not explicitly benefit one race over another. And some tax provisions, as well as public investments and other programs funded by taxes, reduce racial disparities. However, these efforts would be more effective if the Treasury got more revenue and it was raised in a more progressive tax manner.

Still searching for tax code answers: There's no disputing that the tax code does provide preferences, and most of those reflect the views of the writers of the law.

As the makeup of our nation and its Congressional and executive leaders change to better reflect the United States, there is a chance the biases can be eased if not removed.

But it's also true that, as Dr. King knew back in the 1960s, it is going to be a long, difficult, and uneven journey to get to that equitable tax dream.

Thank, Mark, for the added resources on this important issue. Kay

Good article. Good Points.
Senator Crapo (from my home state) shows the ignorance of the issue.
Yes, wealth is an underlying issue (why is that?) and how have our laws negatively affected Black wealth? Brown wealth? Poor Whites as well?

Another book "The Black Tax" covers some of the issues. Not the best book ever (taxes) but it hits some of the examples.
"The Color of Money" is a good book about the banking system as it relates to our Black communities--- affects wealth - affects taxes.

Bottom line- there are two tax systems, one for wealthy and one for the rest of us.