The hubby has been planted in front of the upstairs television since the World Cup began. I've been watching the MLB Network, wondering when the GM-less Houston Astros will make a move beyond the José Abreu signing.

We'll weather this sports breach in our marriage. He's a big baseball fan, too, and the World Cup rolls around just every four years. And at least he's not a gambler.

World Cup as major betting draw: Lots of other Americans are, however, and in this first World Cup since the 2018 Supreme Court in 2018 allowed states to legalize sports betting, they are taking advantage of the games.

The American Gaming Association (AGA) estimates that 20.5 million American adults, or eight per cent of that demographic, will bet a total of $1.8 billion on the FIFA tournament. 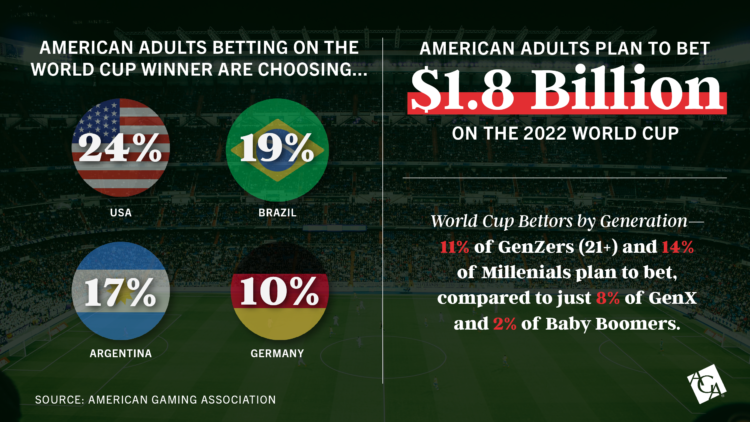 But that's just a drop in the betting bucket domestically. Americans wagered $7.6 billion on the Super Bowl and $3.1 billion on March Madness, the NCAA basketball tourney.

Globally, the U.S. wagers, which likely slowed once the U.S. men's team lost, are even are even more minuscule. Worldwide, $35 billion is expected to be wagered on these futbol/soccer games, according to Barclays Plc analysts. That's a 65 percent increase from the last World Cup.

Another factor is that three of the country's most populous states — California, Texas, and Florida — have yet to legalize sports betting within their borders.

My native state has been a holdout when it comes to betting, on sports or anything beyond lotteries, thanks largely to efforts from religious groups and those concerned about gambling addiction.

But things might be changing in the Lone Star State.

Rick Perry, a former Texas governor and Donald Trump's energy secretary, has lent his politically conservative voice to the pro-gambling cause. Perry is the spokesman for the Sports Betting Alliance (SBA). It's a group of professional sports teams (yes, my World Champion Astros and Dallas Cowboys, as well the state's other pro clubs, are there), event venues, betting platforms, and fans, who support legalizing and regulating sports betting.

"Texas is built on the core principle of individual freedom," says Perry in an SBA video touting Texans' independent streak. "And we pride ourselves on being an economic powerhouse in the nation. Legalizing mobile sports betting will finally allow the state to protect consumers from illegal offshore betting sites while keeping the money generated from betting in Texas to benefit Texans."

Betting's payoff for state treasury: The bottom line, of course, will be money. Texas is surrounded by states that allow gambling beyond the slips spit out by lottery vending machines.

Louisiana just wrapped up its first full year of legal sports betting. The Pelican State's result? It collected $26.4 million in taxes from the $1.8 billion dollars dropped by bettors on games.

To paraphrase a marketing pitch from the Maryland lottery, a state where the hubby and I spent almost two decades, and yes played that state game, "It could be you, Texas."

Louisiana legalized retail sports betting beginning in November 2021, followed by mobile sports betting in January. The legislation allowed mobile operators to claim up to $5 million in promotional credits, and most used up the allowance early in the year, resulting in increased tax revenues over the last six months.

While the Louisiana numbers are impressive, and likely will move the Texas pro-betting needle a bit, tax revenue from gambling has been, in the long run, somewhat disappointing overall. And Texas, with no individual income tax, won't get any added tax money from Lone Star State winners.

Still, Texas lawmakers continue to get pressure from real estate owners to lower their tax burden. Taxes on real property, along with the state's sales tax, are the only ways to refill the state's treasury.

That, along with economic pressures and this new sports betting push, might finally be enough to get all types of gambling, and associated taxation of it, approved in Texas.