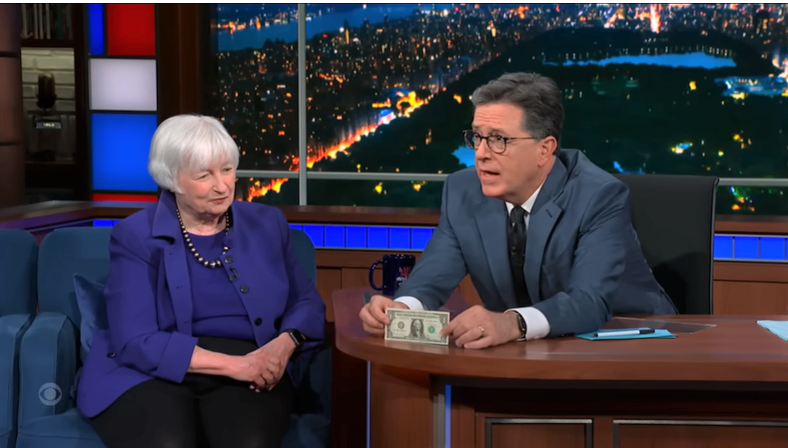 Among the things Treasury Secretary Janet Yellen discussed with late-night television host Stephen Colbert during her Nov. 30 appearance on his "Late Night" show was her signature that will be on currency starting next year. (Screenshot from Late Night YouTube video)

I tend to go cashless as much as possible, but I'm also a currency collector. Yeah, one of my many dichotomies.

I have a 1976 version of the $2 bill, Yes, the greenback with Thomas Jefferson's mug is real and still in circulation.

I also stashed a crisp new $10 bill a few years ago when it looked like Jefferson's political foe, Alexander Hamilton, might be moved off that bill to make room for Harriet Tubman's image. That's not happening.

Instead, the former slave and abolitionist will be the first woman on U.S. paper money when she replaces Andrew Jackson on the $20, but not for a while. I'll add Tubman's monetary portrait when it finally goes into registers.

And in 2023, I'll be checking the few bills I do occasionally get for a new addition to my obviously random and amateur currency collection. They will bear two historic signatures.

Yellen and Malerba on currency: The first banknotes bearing the signatures of Treasury Secretary Janet Yellen and U.S. Treasury Chief Lynn Malerba are being delivered this month, December 2022, to the Federal Reserve.

The history making bills will be in circulation starting in the new year. However, they were unveiled today, Dec. 8, at the Bureau of Engraving and Printing's (BEP) Western Currency Facility in Fort Worth, Texas, one of two currency production operations.

Yellen and Malerba were in the Lone Star State to ceremonially sign fresh sheets of $1 and $5 bills, then tour the facility and speak to employees.

"I will admit, I spent some quality time practicing my signature," said Yellen, who held up a newly minted $5 bill that bore the two women's signatures. Malerba noted that "two women on the currency for the first time is truly momentous."

Why the delay: The historic event has, however, taken a while. Yellen has been on the job for nearly two years; the Senate confirmed her on Jan. 24. Yellen appointed Malerba, Lifetime Chief of the Mohegan Tribe, to serve as Treasurer of the United States on June 21.

Yellen, during a recent appearance on "The Late Show With Stephen Colbert," explained that it was a quirk of currency design that required a new treasurer of the United States to be in place before the money could be remade with both of their signatures.

Other Treasury women also making strides: At today's reveal of the bills bearing her and Malerba's signatures, Yellen noted that the two agency officials were just a part of a changing federal agency.

"Women represent around 62 percent of the Treasury workforce, and women are in positions of power across our department," Yellen said Thursday at the BEP event. "Today is not about me or a new signature on our currency. It's about our collective work to create a stronger and more inclusive economy."

You can watch Yellen's remarks in the Treasury YouTube video below. The action starts below automatically at around 17 minutes, 58 seconds.

Currency's importance: Yellen also touched on the role of real money to a society, beyond simply enabling for the exchange of goods and services.

While "currency powers our economic engine," Yellen added that "money also has a deeper social purpose. Currency is something we use and touch every day. When done right, it can tell us who we are, what we value, and what is possible.

Some of the first banknotes issued by the Continental Congress included unifying messages like "we are one," she noted. She also pointed to 20th century coins featuring national heroes like Susan B. Anthony, the first woman to appear on a circulating U.S. coin, the coins rolled out this year by the Mint with faces American women trailblazers Maya Angelou, poet and civil rights activist, and Anna May Wong, Hollywood's first Chinese-American film star.

These coins, and the coming Tubman $20 bill, are part of the Treasury's and the country's work "to ensure our currency and coinage reflect the full fabric of our nation," said Yellen.

And who knows, maybe one day instead of — or at least in addition to — referring to a signature as someone's John Hancock, we'll be telling folks to put their Janet Yellen the documents.