Home Table of Contents Tax Tips Credits Deductions Refunds State Taxes Politics/Laws Tax Terms Archives
Severance pay helps after a layoff, but it still is taxable
What to do if your 1099-K is not OK

IRS warns that tax refunds in 2023 might be smaller. Here are 3 reasons why

Some taxpayers might not be this happy in 2023 with their federal tax refund. (Image via Giphy)

Many folks are already eagerly anticipating the 2023 tax filing season because they expect to get a refund from Uncle Sam.

In a recent news release encouraging taxpayers to get ready for the upcoming filing season, the Internal Revenue Service slipped in this warning: Refunds may be smaller in 2023.

There are three tax issues in 2022 that contribute to why the IRS will be sending some taxpayers smaller refunds when they file next year.

No extra coronavirus funds: The main reason for the shortfall, notes the IRS, is that there weren't any COVID-19 Economic Impact Payments (EIPs) in 2022.

That added money authorized during the virus' height helped the millions who received the funds make it through economic struggles caused by layoffs and business closures.

Most of the 2020-21 EIPs were automatically sent to taxpayers whose information was in the IRS database. But others had to file to get the money, either via a special EIP process or by claiming the funds as the Recovery Rebate Credit. That tax credit claim helped bulk up recent refund amounts.

Charity deduction done: An expired special tax deduction option is the second reason some refunds might be smaller.

Changes to the standard deduction in the 2017 tax reform law, the Tax Cuts and Jobs Act, made that filing option much more popular. But with even more eschewing itemizing, some charities complained that they were taking a donation hit since to get any tax benefit for their gifts, taxpayers must itemize.

So Congress created a new tax break on 2021 returns for donors who claimed the standard deduction. In these cases, taxpayers could claim some cash donations — up to $300 for single filers, $600 for married couples filing jointly — directly on their 1040 forms.

But this tax break expired at the end of 2021. If Congress doesn't resurrect it for the 2022 tax year (and beyond) in last-minute tax legislation (don't hold your breath), you'll have to fill out Schedule A to claim any gifts to IRS-approved nonprofits.

And without that break allowing for a bit of a reduction in your income, your tax bill might be bigger on this year's filings, cutting into your possible refund.

New reports of taxable income: The third reason for potentially smaller refunds is a new reporting system that will alert the IRS of individuals' taxable income. The American Rescue Plan Act (ARPA) lowered the threshold that triggers third-party network payment processers to report those amounts.

Previously, they issued a Form 1099-K when a seller hit either 200 transactions or $20,000 in aggregate transactions. Now the forms go to the sellers — with a copy to the IRS — when a single transaction exceeds $600. 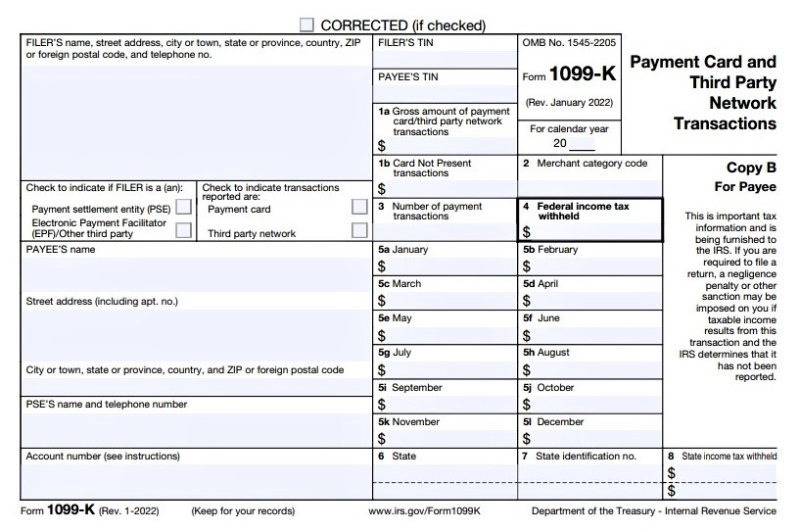 See more tax forms and more about them at Talking Tax Forms.

This lower dollar trigger was created to make sure those with money-making enterprises do report their income. Even though tax law always has said that you should report self-employment income even sans documentation, many people don't realize that (obviously not readers of the ol' blog, who've been advised for years to report all income even if you don't get a 1099 form) or just decided to cheat the U.S. Treasury of tax money (again, obviously not Don't Mess With Taxes' honest readers).

The law change is designed to, shall we say, remind those who make such money that it's taxable. The IRS is particularly looking to collect from folks with side hustles, who may not be as up to speed on tax law as full-time self-employed taxpayers.

When they use third-party payment services like PayPal or Venmo, or sites such as Facebook Marketplace, Etsy, or eBay for sales that meet the $600 trigger, they — and the IRS — now will get 1099-Ks.

The proper reporting of those earnings, especially by first-time filers of side income, likely will increase the filers' tax liability. Or cut into any potential refund they might have expected if they hadn't made those added taxable dollars.

Average refund amounts: So how much of a bite might these changes take out of tax refunds? Since every taxpayer's situation is unique, it's hard to say.

But we can look at IRS data from this filing season and get an idea of the average refund issued so far in 2021.

As of Oct. 28, the latest update by the IRS of 2022's filing season statistics, the agency had issued slightly more than 108.6 million refunds. The refund dollar total came to almost $345 billion, which breaks out as an average refund of $3,176 per recipient.

That $3,176 average refund is almost 14 percent larger than the amount issued at roughly the same time in 2021. A year ago it was $2,791. Again, the increase in this year's average refund is due to EIPs and the other reasons discussed earlier.

Still working on filing backlog: The final average refund amount for 2021 also will change as the IRS works through returns, including those filed in October by taxpayers who got their 1040 filings extended for six months.

The numbers will be affected, too, by backlogged filings, which stacked up during the pandemic, that the IRS still is working through.

In fact, admits the IRS, some taxpayers are still waiting for confirmation that their 2021 tax return has been processed. Many of them also are waiting on that filing's associated tax refund or the processing of a coronavirus stimulus payment.

How many are waiting?

The IRS reports that as of Nov. 11, it had 3.7 million unprocessed individual returns it received this year. These include tax year 2021 returns and late filed prior year returns. Of these, 1.7 million returns require error correction or other special handling, and 2 million are paper returns waiting to be reviewed and processed. The IRS also had 900,000 unprocessed Forms 1040-X for amended tax returns.

Yes, a nearly 4 million backlog is just half the number (around 8.2 million) of unprocessed individual returns the IRS was looking at in August. But it's still a lot, affecting a lot of folks waiting for money.

So those 3.7 million unprocessed 2021 tax year returns are this weekend's By the Numbers figure.

And to all these folks, the IRS says "their patience is appreciated."