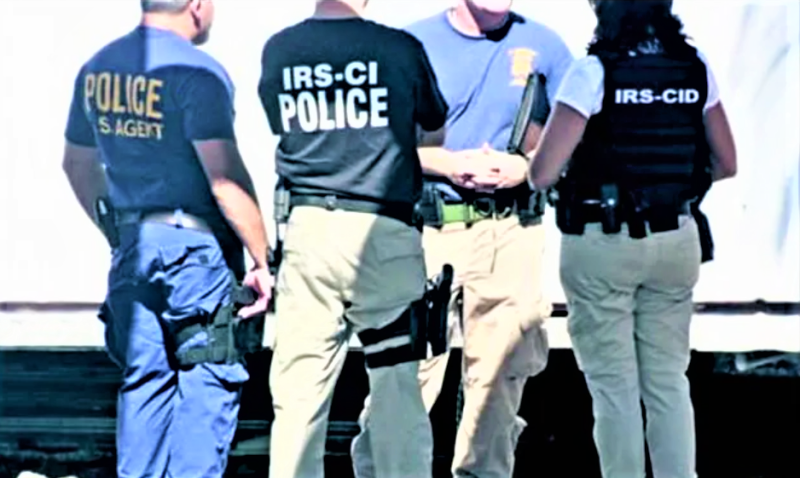 The Internal Revenue Service's Criminal Investigation (IRS-CI) division is doing its part to close the Tax Gap, which now sits at $496 billion in uncollected tax.

The IRS' law enforcement group's recently released annual report notes that its agents initiated more than 2,550 criminal investigations, identified more than $31 billion from tax and financial crimes, and obtained a 90.6 percent conviction rate on cases that were prosecuted.

Much of IRS-CI's success during the 2022 fiscal year, which ended on Sept. 30, was due to its increased cooperation and partnership with its global counterparts to combat tax and financial crimes worldwide.

"This is why IRS-CI continues to cement itself as the preeminent law enforcement agency investigating financial crimes on a global scale," said IRS Commissioner Chuck Rettig in a statement accompanying the IRS-CI report.

Its 2,077 special agents spent about 70 percent of their time during the last fiscal year investigating tax-related crimes, such as tax evasion and tax fraud, according to IRS officials. The remaining investigative time focused on money laundering and drug trafficking cases. 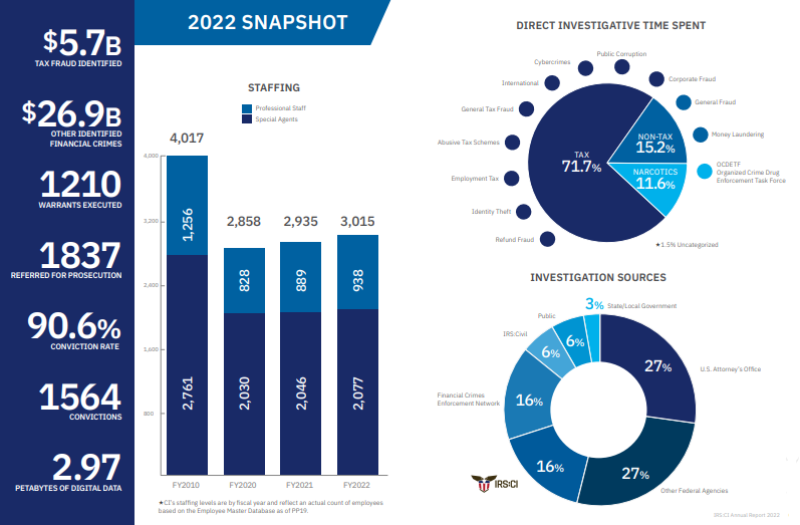 "Our team follows the money," said IRS-CI Chief Jim Lee. "We've been doing it for more than 100 years, and we've followed criminals into the dark web and now into the metaverse. Tax and other financial crimes know no borders. If you violate the law and end up in the crosshairs of an IRS-CI special agent, you are likely going to jail."

The money IRS-CI followed last fiscal year led to the identification of more than $31 billion from tax and financial crimes. That resulted in IRS seized assets valued at approximately $7 billion.

International investigations: One of IRS-CI's major roles was as part of Taskforce Kleptocapture, which targets Russian oligarchs and others who are trying to evade sanctions implemented after the invasion of Ukraine. IRS agents joined the task force in March 2022.

IRS-CI also worked with the Chiefs of Global Tax Enforcement (J5) to identify potential sanction evaders or sanctioned assets as part of a global strategy to deter Russian aggression.

As of September 2022, the agency had identified nearly 50 individuals and entities for potential sanctions-related enforcement.

Cybercrime fighting: Cybercrime continues to be a major CI focus. The division's Cyber Crime Unit, with assistance from other U.S. authorities, traced billions of dollars of Bitcoin stolen from Bitfinex, a cryptocurrency exchange, after a 2016 hack.

That led to the February 2022 arrest of Ilya Lichtenstein and his wife, Heather Morgan, for alleged conspiracy to launder stolen cryptocurrency. IRS-CI special agents lawfully seized and recovered more than 94,000 stolen Bitcoin, which was valued at over $3.6 billion at the time, marking the largest seizure in U.S. history.

If you have an hour, you can watch CNBC's American Greed documentary on Lichtenstein and Morgan, aka the Crypto Couple, and the investigation that led to their arrests.

Many more cases: You can find much, much more on IRS-CI's actions last fiscal year in the report. It includes additional case examples for each U.S. field office — it has 20 of them, along with 12 attaché posts abroad — as well as an overview of the division's international footprint, details about the specialized services IRS-CI provides, and investigative statistics, broken down by discipline, for FY22. 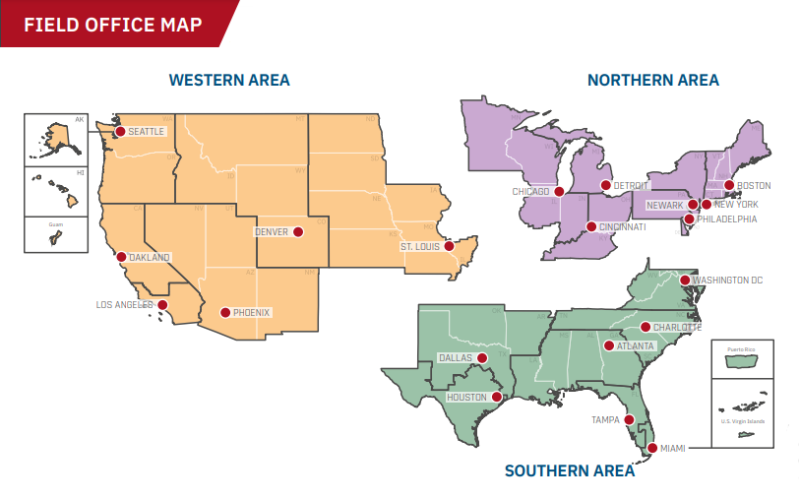 The 46-page report, officially known as IRS Publication 3583, is chock full of data. But IRS-CI head honcho Lee has his favorite.

"Perhaps the statistic I continue to be most proud of is our conviction rate, which again tops 90 percent," Lee said in the report's opening Message From The Chief. "We are thorough and good at what we do. As I tell crowds around the country, if a CI special agent has you in their crosshairs, there is a good chance you are going to jail."

If that's what is the biggie as far as the IRS-CI boss is concerned, then that's enough for me to choose the 90.6 percent conviction rate as this weekend's By the Numbers figure.