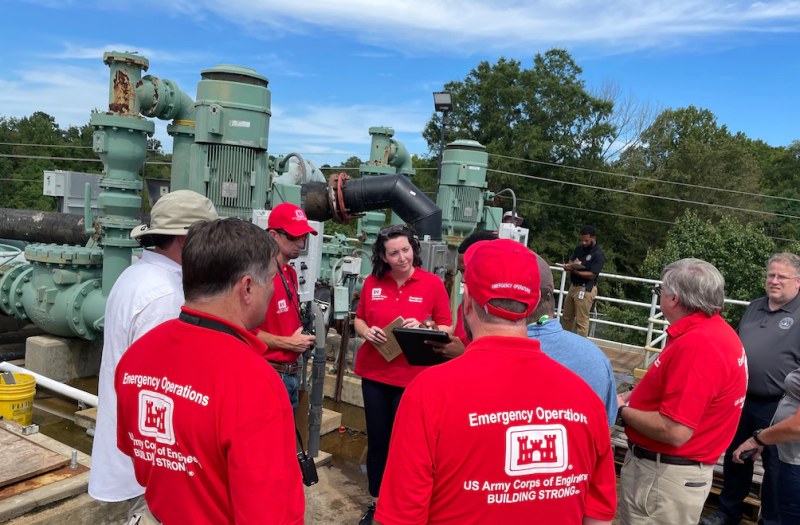 U.S. Army Corps of Engineers (USACE) Vicksburg District engineers at the O.B. Curtis Water Treatment Plant in Jackson, Mississippi, after flooding led to a water crisis in the state's capital city. The pumping system is getting back online. In the meantime, a couple of Uncle Sam's agencies are offering residents relief. (USACE photo by Sabrina Dalton via Wikipedia Commons)

Thursday, Sept. 15, is the deadline for most taxpayers who must make third quarter estimated tax payments. Some Mississippi filer, however, get until next February.

But the reason for the extension is not one they, or anyone, would want.

Heavy rains on in late August led to flooding of the Pearl River, which overwhelmed a municipal water pump in Jackson, the Magnolia State capital. Once the pump failed, residents were left without running water.

Taps are working again, but when it resumed, the water wasn't potable. Or ready for any other normal use as the social media post below shows.

The good news is that Jackson city officials announced this morning, Sept. 13, that its O.B. Curtis Water Plant maintained steady pressure over the past 24 hours. Even better, there is less water discoloration like that shown in the above Twitter video. Here's hoping all Jackson residents soon can get back to normal water usage. 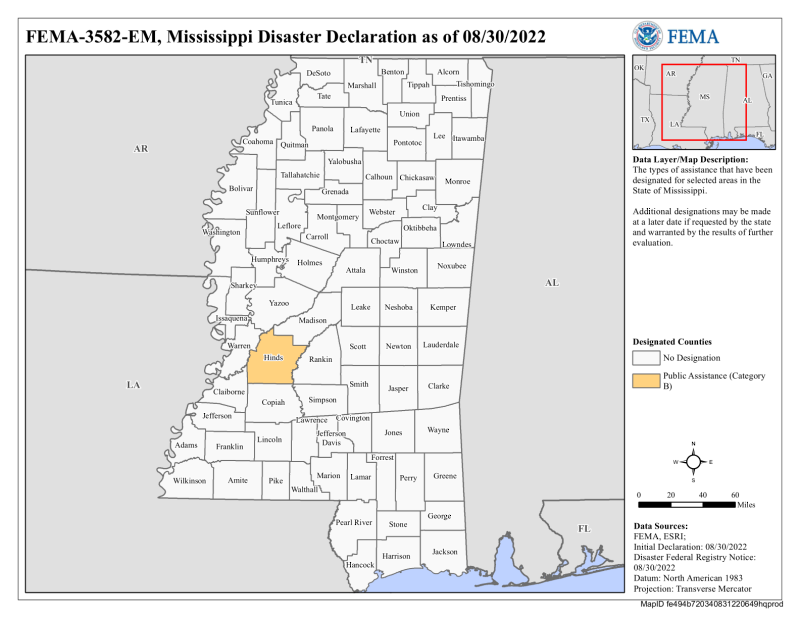 As usual, the IRS followed with an announcement that taxpayers affected by the water crisis will receive tax relief.

The most immediate tax relief, as noted at the top of this post, involves this week's estimated tax deadline. Affected Mississippi taxpayers now have until Feb. 15, 2023, to pay any third quarter estimated tax normally due on Sept. 15. In addition, the fourth and final tax year 2022 estimated tax payment due on Jan. 15, 2023, also is pushed to Feb. 15, 2023.

In addition, Mississippi taxpayers in the disaster area who got a six-month extension to file their 2021 return can now wait until next year's new mid-February deadline, instead of the normal Oct. 17 due date, to send in their 1040 forms.

Note, however, that since 2021 tax due should have been paid when the extension was granted earlier this year, if you still owe any money, you need to pay it as soon as possible. The disaster doesn't affect the due tax, so penalties and interest will keep accruing.

Business filers get same new deadline: Business owners in the disaster area also get some deadline relief. Companies with an original or extended due date also have until Feb. 15, 2023, for, among others, filing calendar-year partnerships and S corporations whose 2021 extensions run out on Sept. 15.

The same new deadline applies to calendar-year corporations whose 2021 extensions run out this Oct. 17.

And the IRS says penalties on payroll and excise tax deposits due on or after Aug. 30 and before Sept. 14 — that's tomorrow — will be abated as long as the tax deposits are made by Sept. 14 — again, tomorrow.

Additional affected taxpayers: Those who don't live or have a business in the Mississippi disaster area, but whose records necessary to meet a deadline are there (for example, at your accountant's office), also are entitled to the same tax relief.

Mississippi taxpayers in the disaster relief area who do get a late-filing or late-payment penalty notice from the IRS for a tax matter that falls within the new deadline and payment postponement period should call the telephone number on the notice to have the IRS abate the penalty.

Claiming casualty losses: Now for the re-run warning for regular readers of the ol' blog.

Finally, don't forget that if you sustain uninsured losses from a declared major disaster, you may be able to claim them on your federal tax return.

In filing such loss claims, you can choose between two tax years, either declaring the losses the year the disaster occurred or the prior year. Mississippi disaster area taxpayers can claim any of this year's eligible losses on their 2022 tax returns due in 2023, or on their 2021 returns.

Affected filers who got an extension and want to claim the recent flood losses on their 2021 taxes can do so when they file that extended Form 1040 by next Feb. 15. Taxpayers who have already filed 2021 taxes can file an amended return using Form 1040-X to claim the losses for that prior year.

In all major disaster cases, you need to run the numbers to make sure that your choice of tax year provides you with the most advantageous tax result.

Check your records, or ask IRS for them: If you need copies of past tax information to help you decide which year to claim the losses, the IRS will waive the usual fees and requests for copies of previously filed tax returns for affected taxpayers. Just be sure to put the assigned disaster designation "Mississippi Water Crisis" in bold letters at the top of your Form 4506, Request for Copy of Tax Return, or Form 4506-T, Request for Transcript of Tax Return, that you submit it to the IRS.

Affected Mississippi disaster area filers also should write the disaster designation phrase in bold letters at the top of any filing related to the disaster. Also include the FEMA disaster declaration number, which is EM-3582-MS, on any return.