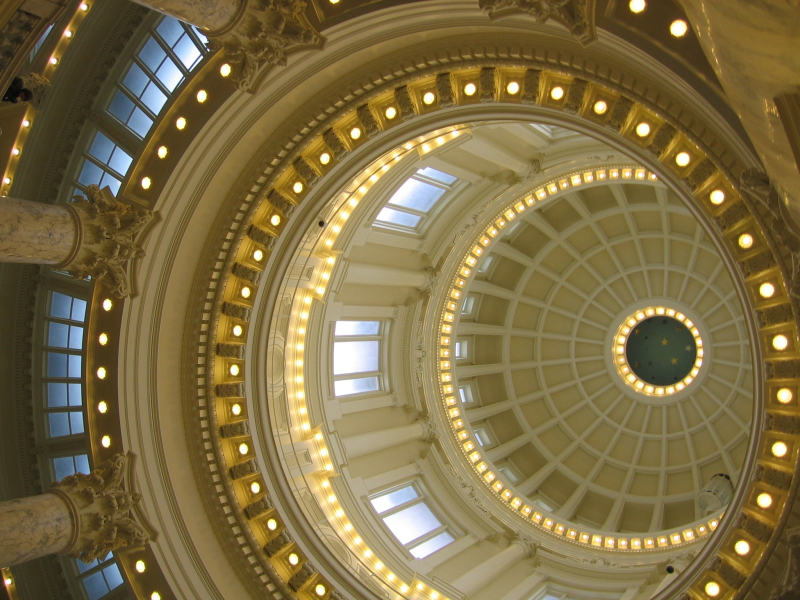 Looking up provides a lovely view of the Idaho statehouse dome. Gem State lawmakers, however, recently went the other direction, lowering the state's top personal income tax rate and making it the lone flat tax amount collected on individual earnings starting in 2023. (Photo by Kencf0618 - Own work, CC BY-SA 3.0)

I've spent most of my earnings life in no-individual-income tax states. I was born, grew up, and got my first jobs in Texas.

After a stint in Maryland, which collects state and local income taxes, the hubby and I moved to Florida, another no personal income tax state. Then we came home (he's a native Texan, too) to the Lone Star State.

Those years in Maryland were great, but they also gave me an understanding of why folks hate paying tax on their earnings to multiple government collectors.

And there are a lot of U.S. residents in that crowed state tax boat.

A few no-tax places: Most U.S. residents pay state income taxes. A lot of them, like my former Maryland neighbors, also pay local taxes on their earnings.

Only eight states don't levy a personal income tax. They are my current home of Texas, former home of Florida, and Alaska, Nevada, South Dakota, Tennessee, Washington, and Wyoming.

But across the country in New Hampshire, individuals who've long been paying tax on dividends and interest are watching that tax fade away. The Granite State's tax is being phased out, and when Jan. 1, 2027, arrives, New Hampshire will become the ninth no-personal-income-tax state.

Flat taxers hitting 10: Nine, however, use a flat tax system.

That flat tax number will become 10 — and the graduated rates and brackets list drop to 31 + D.C. — next year.

In 2023, Idaho is joining the flat state income club.

The Gem State's one rate will be 5.8 percent. Idaho's lone rate also will be the highest among the current flat tax states. Those states and their 2022 tax year rates are:

Still, as advocates of the change would argue, you've got to start somewhere.

Flat tax rate pros and cons: The battle of which is best and for whom has been raging for, probably as long as income taxes have been levied. 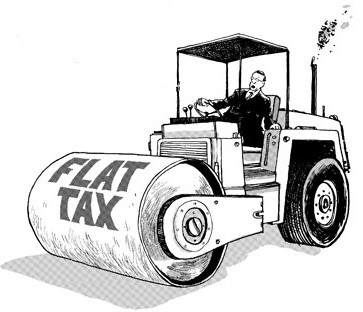 Both sides can agree on one thing. A flat tax is simpler.

After that, though, there's no common ground.

Flat tax supporters argue that it helps grow economies and encourages wealth accumulation because higher income earners have more money to invest in their or other companies.

They also point to the end of loopholes added to state and federal tax codes at the behest of lobbyists. Personal aside: I don't think loopholes will ever be plugged.

Pro flat-taxers also contend that the simplicity will help reduce fraud. Again, color me skeptical about anything stopping tax cheats.

They also argue that the usually lower tax rates could negatively affect state revenues and projects the tax money funds.

Growing flat-tax trend: You can expect those arguments to continue in more states.

While 10 flat tax states aren't many, the trend toward that system has accelerated recently. Idaho is the fifth state in the last two years to move from a graduated rates personal tax system to a flat tax.

That's pretty amazing since, as Jared Walczak, vice president of state projects at the Tax Foundation, notes, "In more than a century of state income taxes, only four states have ever transitioned from a graduated-rate income tax to a flat tax."

"In what is already a year of significant bipartisan focus on tax relief, 2022 is also launching something of a flat tax revolution," wrote Walczak in a recent article for the Washington, D.C.-based tax policy organization.

Just how big will this flat tax revolution become? We'll get a better idea in a couple of months after the Nov. 8 midterm election results.

Thanks, Hal, for the information. Corrected! Kay

FYI - the Utah flat tax rate was changed to 4.85% earlier this year by the UT legislature.