Hurricane season 2022 is NOT over! Nicole's on her way. Prepare now!

UPDATED, Monday, Nov. 7, 2022: In case you forgot, hurricane season 2022 doesn't officially end until Nov. 30. Mother Nature knows. In fact, National Hurricane Center forecasters say Florida is the target of Subtropical Storm Nicole. The image below shows the storm path's cone of uncertainty. Don't be fooled by the "sub" prefix. Like tropical systems, a subtropical storm has a well-defined center and a closed circulation. However, the area of maximum winds within the circulation is farther away from the center and there is less symmetry, according to the National Weather Service. Subtropical storms generally produce less rain than a typical tropical system, but don't write them off, especially in areas still dealing with the damage from September's deadly Hurricane Ian. So don't let your guard down, regardless of where you live. And be ready! 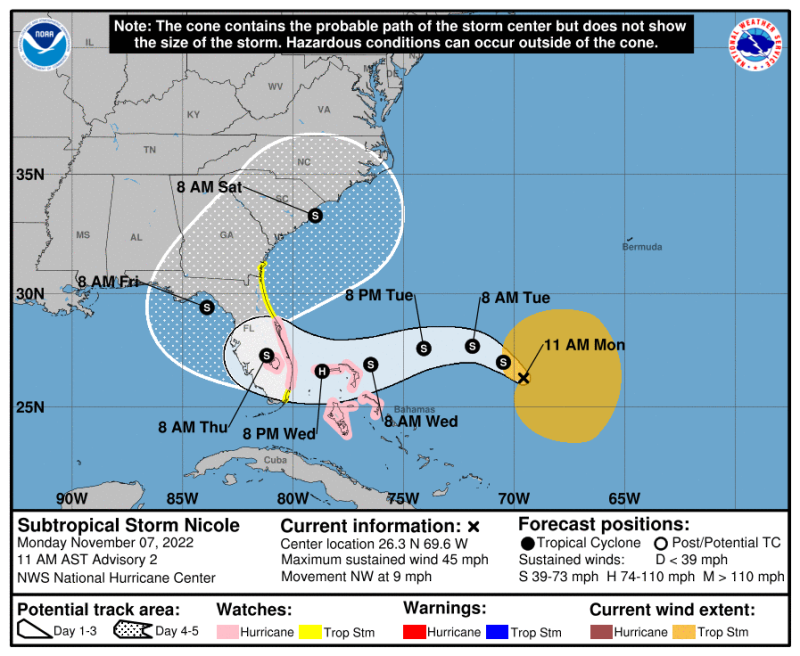 It's been a weird and mild 2022 hurricane season. So far.

When hurricane season officially began on June 1, it looked like we were in for another busy year. As has been the case in recent years, the United States got an early storm.

But the rain system that drenched in early June didn't get his Tropical Storm Alex name until it existed east of the peninsula.

As we entered September, typically the most active month of the Atlantic/Gulf of Mexico hurricane season, we were just into the fifth letter of the alphabet.

See Updates at the end of this post for storms that formed and made landfall since this post originally went live on 9/5/22.

And, thank goodness, it looks like they won't be too threatening.

Hurricane Danielle meandered across the middle of the Atlantic. Tropical Storm Earl didn't make a direct hit, but did create some rain and flood concerns for the U.S. territories of Puerto Rico and U.S. Virgin Islands.

Fiona, however, could be more serious. She looks to be taking aim at Puerto Rico.

Again, check the updates at the end of this post for storms that formed and made landfall since this post originally went live on 9/5/22.

Historic pattern says get ready: But a slow start doesn't mean things will stay that way. Historically, September is the main month for tropical storm activity. 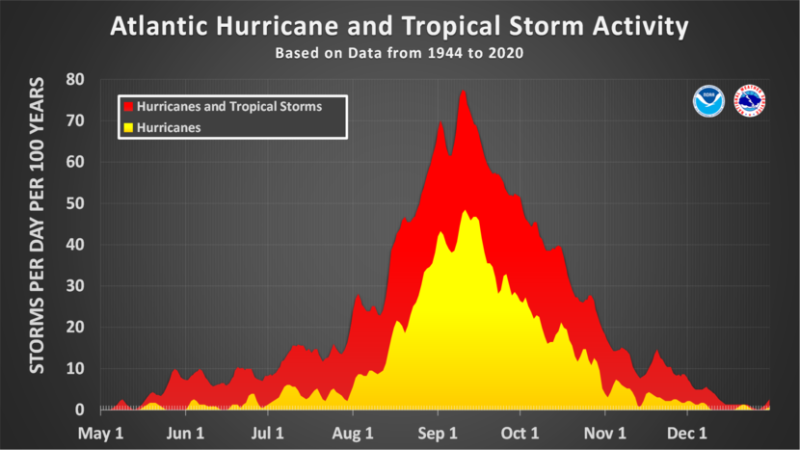 That's why September is National Preparedness Month. The Internal Revenue Service is doing its part by reminding all of us to get our tax material ready for possible hurricanes and other natural disasters.

You can find more on such preparations in my first disaster prep post of the year, which looked at Agatha, the first Pacific-spawned storm of 2022.

You also can find more (much, much more) on disasters in the ol' blog's special Storm Warnings pages. This multi-page collection of posts created over the years offers advice on preparing for (that's where a link to this post will be), recovering from and helping those who face the many ways that that weather goes wild.

And don't forget about the other federal government resources that, like those offered by the IRS, can help you deal with a natural disaster.

The ol' blog's posts tagged "disaster" also have more info on getting ready for any natural catastrophe any time of the year.

Evacuate to stay safe: Sometimes the best way to face a looming disaster is to leave. That's why it's good to have all your tax, medical, and other important materials in a ready-to-go bag or container.

I know it's not an easy decision to abandon your home. The hubby and I went through several tropical storms and were at landfall central for two hurricanes (within 3 weeks of each other!) when we lived in Florida.

Those 'canes we weathered in 2004 were solid category 2 storms, and we didn't get a get out order. But they were unnerving. If a storm is going to be stronger, and your local officials say evacuate, then do it.

Also realize that if a storm hits and you've ignored local or state officials' instructions to evacuate, you likely won't be rescued if things get worse than you expected.

The decision to not put first responders' lives in danger during major disasters is not made lightly. By their choice of jobs, first responders want to help. But in extreme circumstances, rescue attempts by police, fire, and emergency medical personnel are likely to be extraordinarily difficult if not impossible.

So as you prepare for storms, also be prepared to leave. For everyone's sake and safety.

At the federal level, the Volunteer Responder Incentive Protection Act, or VRIPA, was made permanent as part of the federal spending and COVID relief act signed into law at the end of 2020. The provision exempts from tax certain benefits and up to $600 per year of other incentives that volunteer emergency responders receive as a reward for their services.

Several states also provide first responder tax breaks to their police, fire, and emergency medical personnel. If you're in one of these public service jobs, check with your state tax department (and local, too) about possible tax benefits for your efforts.

Tropical Storm Earl was christened on Friday, Sept. 2, just a day after Hurricane Danielle became one of the most northerly named storms in hurricane tracking history. And on Sept. 14, Tropical Storm Fiona formed.

UPDATED, Saturday, Sept. 24, 2022: As the expression goes, that escalated quickly. Tropical Depression 9 is now Tropical Storm Ian. Florida is under a pre-landfall state of emergency, awaiting Ian's arrival, the timing of which is shown in the new National Hurricane Center graphic below. When TS Ian does come ashore, likely as a hurricane, it would be the first Atlantic hurricane to strike the United States this season, and the first system to directly impact the East Coast since Tropical Storm Colin in July.

UPDATED, Friday, Sept. 23, 2022: As expected, the tropics are finally popping. Tropical Depression 9, if the spaghetti runs of the various storm trackers hold true, could soon impact Florida. Keep an eye on your local weather if you live in the Sunshine State, or elsewhere along the Gulf of Mexico. Storm paths can quickly change. Be ready, especially if 9 develops into Hermine Ian. Note 9/24/22: The name Hemine went to a rapidly developing system near the Azores that reached storm strength before TD9.

UPDATED, Thursday, Sept. 15, 2022: As usually happens in September, the tropics are heating up. When this post went live 10 days ago, two systems were out in the Atlantic, far from the United States or nearby islands. Today, however, we have Tropical Storm Fiona, the sixth named storm of the year. I've replaced the original satellite imagery below; instead of Earl, it's now a Fiona snapshot, since he's looking like she could do some damage to, among other islands, the U.S. territory of Puerto Rico. Regardless of the names, be ready! 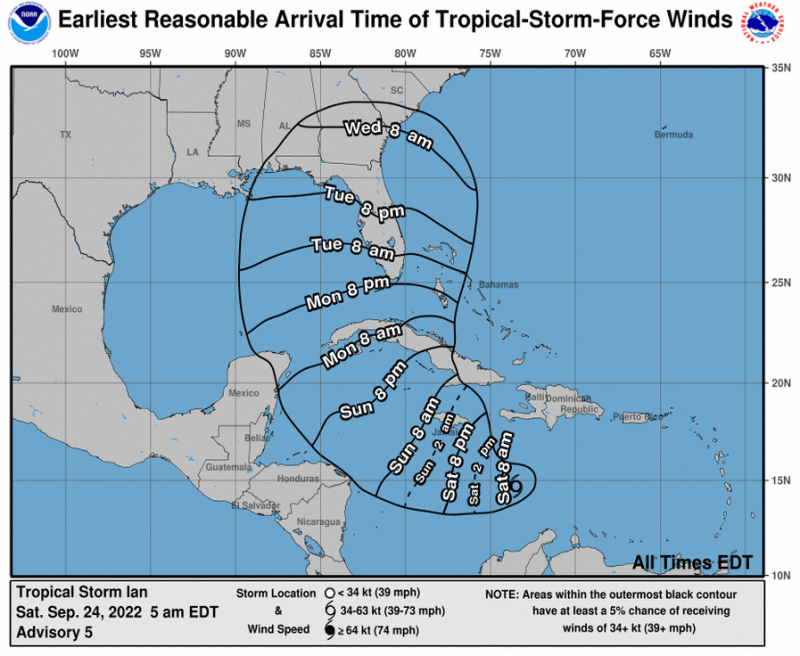