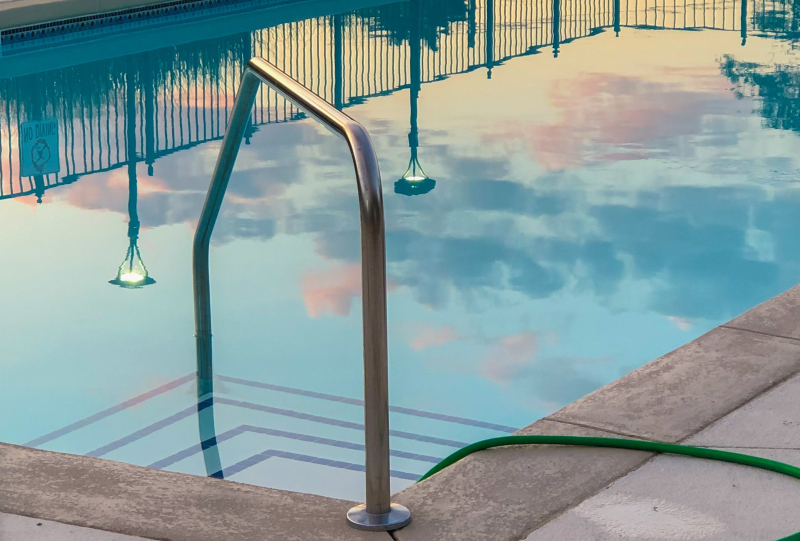 We freaked out a bit earlier this summer when we learned a neighbor whose backyard abuts ours was putting in a pool.

The good news for us is that it's not a full-sized lap pool. It's one of the area's popular plunge pools, close to their house, with lots of space between it and our property line (and house). And the smaller size meant we didn't have to suffer through a prolonged construction.

Despite our property proximity, we're mainly "hi, there" neighbors. Age and family differences — they're younger and have pre-school children — mean we don't socialize. So they haven't invited us over for a dip.

That's why I keep telling the hubby, facetiously of course, that we need to buy a drone so we can get a good look at their pool.

Pools of cash from hidden pools: French homeowners are required to declare swimming pools, since they can affect taxes on the property. Generally, the addition of the water feature means an increase in the real estate's value.

The unreported pools came to more than $10 million in undeclared tax revenues.

Gizmodo reports that France has more than 3 million private swimming pools, making it the second largest market outside of the United States. Pool construction in the country jumped by 30 percent 2021.

AI tax expansion, after refinements: The AI tax evasion eye in the sky was launched as a pilot (pun intended) program a year ago in nine French departments.

Now, the nation's officials are planning to extend it across the country to discover other undeclared taxable property features, according to The Guardian newspaper.

The deeper AI tax dive, however, will require some tweaks.

Reports earlier this year on the Google-Capgemini software showed a 30 percent margin of error. It apparently mistook solar panels for swimming pools, as well as failed to spot taxable extensions that were hidden under trees or in properties' shadows.

"We are particularly targeting house extensions like verandas, but we have to be sure that the software can find buildings with a large footprint and not the dog kennel or the children's playhouse," Antoine Magnant, deputy director general of public finances, told Le Parisien newspaper.

Ferrari tracing used earlier: France is not the first European nation to get creative in tracking down its tax cheats.

A decade ago, Italian officials not only raised taxes on luxury goods, but also stepped up attempts to curb tax evasion. At that time, Italian tax officials estimated non-payment of due taxes cost the government around $159 billion a year.

One of the compliance enhancements in 2012 was setting up roadway checkpoints across Italy, where drivers of expensive cars were stopped for questioning.

The drivers' license and registration information was passed on to the national tax agency, Agenzia delle Entrate, to confirm whether they had enough declared income and paid enough taxes to afford their Ferraris … or Lamborghinis, Maseratis, and Ducatis.

The traffic stops did reveal some owners of luxury cars who had no declared incomes or tax records. Others were found to be on welfare. More than 2,000 luxury car owners who underpaid taxes were identified early in the traffic stop tax campaign. Italian officials said that led to finding more than $12 billion in unpaid taxes.

Some expensive car owners sold their vehicles. The Ferrari factor also led to a slump in sales across Italy of those and other high-dollar, high-performance autos, according to opponents of the stops.

That dealership drop obviously was a Transatlantic example of unintended tax, or in the case, tax enforcement, consequences.

And while France's effort is getting attention now, aerial tax appraisals aren't new. Some Florida residents in 2015 could be heard exclaiming It's a bird! It's a plane! It's a tax collector! — OK, maybe that was just my blog post's headline — as drones looking for Sunshine State property improvements took flight.

One thing is clear, regardless of your elevation. All these creative tax collection techniques underscore that tax officials worldwide are always looking for ways to get their cuts.