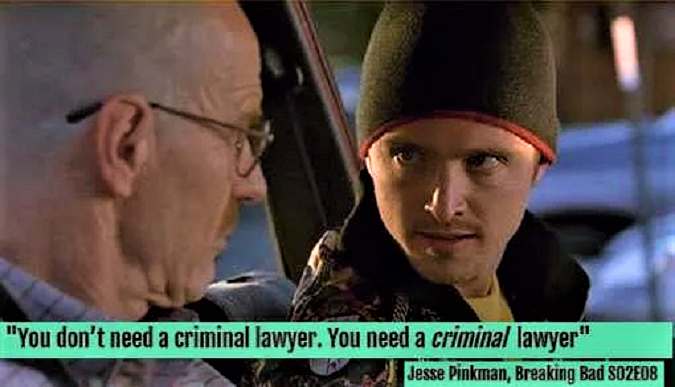 Aaron Paul, as Jesse Pinkman (right), explaining legal representation needs to soon-to-be meth king Walter White, played by Bryan Cranston, in a scene from AMC's "Breaking Bad." As much as I loved that show and its "Better Call Saul" sequel, don't take Jesse's legal advice when it comes to tax troubles. Get honest and experienced professional help for any potentially criminal tax charges, like the ones noted below.

Maybe it's because I'm still processing the end "Better Call Saul," the wonderful six-season exploration of television's best show about the evolution of, echoing the emphasis of Breaking Bad's Jesse Pinkman, a criminal criminal lawyer.

Or maybe it's because the news and my social media timelines are full of the law enforcement and legal actions involving the 45th U.S. president.

Whatever the reason(s), law thoughts are percolating in my brain. That, of course, means laws as they relate to taxes.

IRS tax laws: Among the IRS' training and reference materials is the to-the-point-titled Tax Crimes Handbook. As expected, it's 176 PDF pages of legalese and Title 26 citations.

The handbook was created by the Office of Chief Counsel, Criminal Tax Division, as "a resource for Criminal Tax Attorneys to use in the course of advising their client on criminal tax matters, and in evaluating recommendations for prosecution."

Then there are the program and emphasis areas of the IRS Criminal Investigation (CI) division. Among the issues of CI focus are abusive tax schemes, general fraud investigations, and non-filer enforcement.

While taxpayers who willfully refuse to file taxes can, and do, go to jail, the IRS also takes the civil route in most cases. Here, Uncle Sam's tax collector primarily is looking to recoup its lost revenue from filers. It also wants penalty and interest charges, which could be substantial, on the recovered taxes.

Where a taxpayer's refusal to comply with tax law is egregious or the unpaid amount is substantial, the IRS seeks jail time, too.

While there are plenty of ways to invoke IRS wrath, here are four of the more common types of federal tax evasion that could possibly leave you needing a good, non-Saul lawyer.

1. Failing to file a tax return. The IRS is serious about getting documentation of your taxable earnings. The non-filing penalty is 5 percent of the taxes you owe for each month your return is late, with a maximum rate of 25 percent.

If your return is more than 60 days late, the minimum penalty for not filing taxes is $435 or the amount of tax owed, whichever is smaller. Also remember that interest also is accruing (and inflation has bumped that amount up) on your unpaid taxes, in addition to the failure to pay rate penalty.

Chances are that if you haven't filed your tax paperwork, you likely also have neglected to pay what you owe. In this case, the smaller failure to pay penalty applies. The late/non-payment penalty is 0.5 percent of your due taxes for each month they are unpaid, again with interest added.

So if you realize you can't meet the (usually) April 15 Tax Day deadline, the file Form 4868 to get a filing extension. This will prevent the failure to file penalty. And be sure to pay what you owe or a good estimate of the amount. If you don't, you'll face failure to pay consequences.

Again, the IRS mainly is interested in getting its (your) money. But if you press the matter, expect to face jail time.

The IRS warns you of this with the language in the Form 1040 signature block section:

Under penalties of perjury, I declare that I have examined this return and accompanying schedules and statements, and to the best of my knowledge and belief, they are true, correct, and complete. Declaration of preparer (other than taxpayer) is based on all information of which preparer has any knowledge.

On joint returns, both spouses must sign. And each is held liable, jointly and severally, for what's on the return and any due taxes.

A felony conviction of filing a false tax return could include a maximum prison sentence of up to three years, as well as up to $100,000 in fines for individual taxpayers.

3. Underreporting income on a return. False returns often involve taxpayers who didn't report all their income. Sometimes it's just an innocent error, like failing to report all our income. That happens when, for example, we overlook a 1099 amount (guilty). The IRS catches it when it gets its copy of the form, and things are straightened out relatively easily through correspondence (whew, and no longer guilty!).

But when it's the deliberate hiding of earnings, the IRS is not so forgiving. The IRS has estimated that around 80 percent of the $441 billion Tax Gap, or $352 billion, is attributable to underreporting of income. When the agency discovers the tactic, the penalty for substantial understatement of income is a flat 20 percent of the unreported amount. There's also the possibility of prison time.

Cryptocurrency is one area where the Treasury Department and IRS have increased their efforts to find taxable income. As the digital asset has become more popular, the tax agency is looking at additional ways to ensure that crypto investors pay their fair share of taxes on any Bitcoin et al transaction capital gains.

4. Not disclosing offshore income and assets. One way to hide income that's not reported on a return is to stash it in another country. That, however, opens up a whole other type of tax evasion.

Federal tax law requires taxpayers to report their non-U.S. assets and accounts, which popularly are known as offshore accounts. This is done via the filing of a Report of Foreign Bank and Financial Accounts, or FBAR, with the U.S. government.

FBAR compliance is required by any U.S. person with a financial interest in or material control over assets held in foreign bank accounts or investment vehicles that meet the reporting threshold of $10,000. That's $10,000 collective total of all accounts at any time during the tax year.

Sometimes, foreign account owners don't realize they must file a FBAR. That's deemed a non-willful violation of the requirements every year. Penalties in non-willful FBAR cases are substantial, but are ultimately civil and limited to fines, which could be as much as $10,000.

However, a willful failure of FBAR reporting violation is a criminal offense. It opens the defendant up to a fine up to $250,000 or 5 years in jail, or both.

If you're tempted to test Uncle Sam's ability to find out about your offshore holdings, don't. The ability of U.S. tax and criminal investigators to track down these funds has increased. The United States and most of the rest of the world cooperate in aggressive pursuits of assets hidden from their respective taxing agencies.

Get tax help, before as well as after: The best tax advice is to get good tax advice from a reputable tax professional. That tax pro can help keep you from running afoul of tax problems, civil and criminal.

If, however, you find yourself facing IRS investigators, then get yourself a good attorney who's experienced in criminal tax law. Your lawyer can help you through the legal tax maze, and hopefully limit the ultimate cost, financial and otherwise, that you must face.