Summer means sports and jock taxes, even for non-athletes 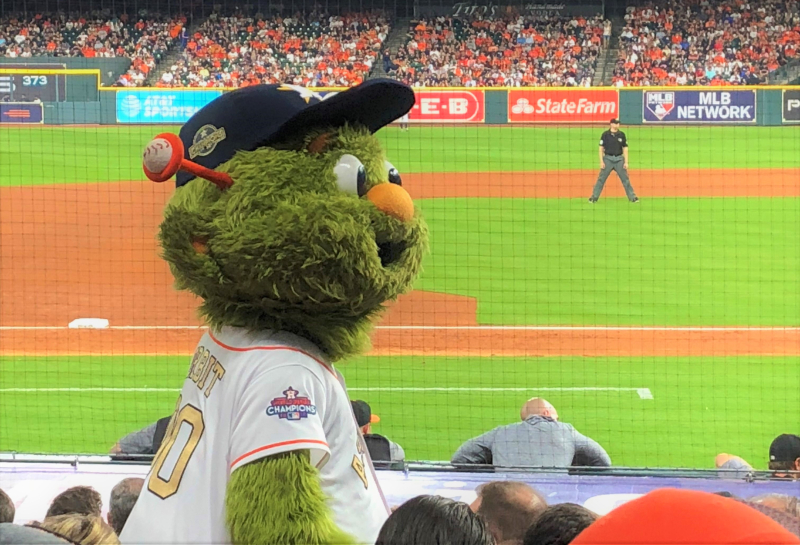 Houston Astros' mascot Orbit generally stays in no-income-tax Texas in doing his job, so he doesn't have to worry about jock taxes. (Photo by Kay Bell)

What are you doing this Fourth of July weekend? In addition to the traditional cookouts and fireworks, many folks across the United States head out to ballparks.

I love the Independence Day break because it means more day baseball. I'm not going to any Major League Baseball (MLB) games in person this year, but you can be sure that I'll be watching them on television, starting this afternoon.

MLB got a late start this year due to the owners' lockout of players, but they're making up the games missed during the first shut-down week. That means there will be a full 162 schedule this year.

Those 162 match-ups give MLB the longest season in major professional American sports.

The number of games also mean the players face more jock taxes. These are the assessments on income earned in a state or city that has an income tax. They are levied on visiting athletes who come into town to play games.

Jock taxes also apply to other types of visiting workers. And COVID has complicated their collection even more.

Paying the tax man to play: Sticking with the sports take, at least for now, let's look at the tax case of the sparkplug that ignites my Houston Astros, José Altuve. He's the team's highest paid player, which works out well for him in no-income-tax Texas.

But the Astros' recent visits to MLB stadiums in the Bronx and Queens means the Empire State got a nice chunk of change from José.

The @Astros business trip to NY to play the @Yankees & @Mets will cost Jose Altuve approx $104,637 in NYS income tax.

But while they're popularly referred to as jock taxes, they apply to all entertainers. The taxes also apply to anyone who comes into the tax jurisdiction to do their jobs.

The Altuve example was especially fitting since New York and New York City are notorious for aggressively going after every tax cent they can rightfully collect, and not just from high-earning athletes and celebrities, but also regular workers.

COVID expands multiple workplace tax concerns: Cross-border taxes also got added attention with the arrival of COVID-19. Many people chose or were told by their employers to work from home during the height of the pandemic.

In some cases, states and cities lost tax revenue when workers didn't come into work at a job within their borders.

In others, working from took on a new host of tax issues. The situation is especially sticky for residents of high-tax states who during the coronavirus pandemic and beyond have been working in a more tax-friendly location. Your state taxes are or will be, at best, messy.

Even before the coronavirus pandemic, more Americans were taking advantage of working from home (WFH). A 2021 Global Workplace Analytics report found that the number of people who regularly work from home increased 216 percent between 2005 and 2019, while the number of employers who offer the option of WFH home was up 40 percent from five years ago.

With the return to the office underway, most employees — 83 percent — prefer a hybrid approach that allows them to continue to partially telecommute.

Two or more taxing jurisdiction issues: If your tax residence and workplace are in the state and/or city, you don't have to worry about taxes.

But if you work in two or more states, you may be required to file a tax return for each state. That's because many states require nonresident employees to pay state income taxes if they earned money within that state, regardless of where they live. Some go so far as to require a tax return if you worked in their state in any fashion, including for a business trip.

That's especially annoying if you live or work in one of the nine U.S. states that do not collect income tax. They are Alaska, Florida, Nevada, New Hampshire, South Dakota, Tennessee, Texas, Washington, and Wyoming. You don't have to report or pay any income tax to those state tax departments.

But if you live in one of them, and the money you're earning is from a state with an income tax, you'll likely have to file a return with the income-paying state. That's particularly true if you actually, physically to into the income tax collecting state at least some days to do your job.

Some states changed their laws during the pandemic to ensure that their state residents who normally work out of state, but were forced for health protocol reasons to work from home weren't/won't be taxed on their income by two states.

If that's you, good for you. If you're not sure, check with your state's revenue office about your multistate earnings tax responsibilities.

Or, better idea, treat the jock tax the way professional athletes do. Hire a tax professional familiar with interstate tax matters to help you maneuver your multi-jurisdictional income tax matters.