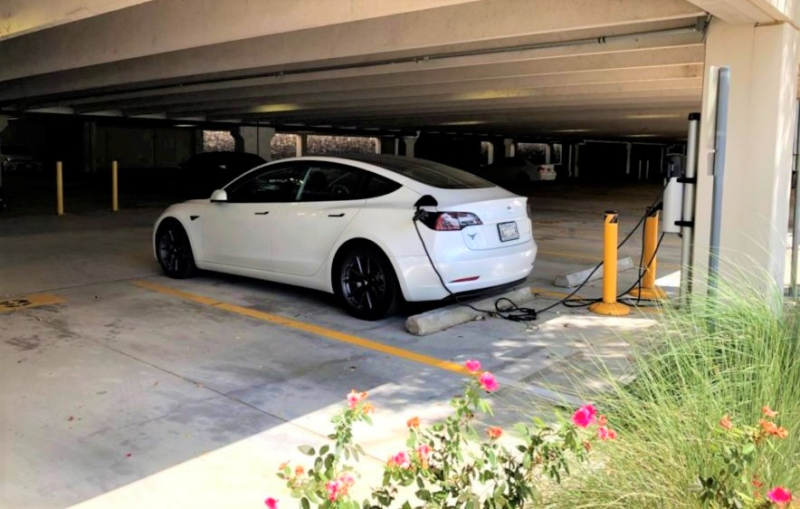 More of my Austin, Texas, neighbors could be driving (and recharging) electric vehicles if the recently agreed-upon economic bill makes it into law. (Photo by Kay Bell)

As the tax world frantically thumbs through the Democrats 725-page economic plan, one thing is clear. Makers of electric vehicles and the folks who want to buy them are winners.

The Inflation Reduction Act of 2022, the catchy (OK, as far as political monikers are concerned) new name for the measure that salvages some of President Joe Biden's retooled Build Back Better proposals, was worked out this week by Senate Majority Leader Chuck Schumer (D-New York) and Sen. Joe Manchin (D-West Virginia), the persistent legislative thorn in most of his party's side.

Among the most inspected parts of the measure are those dealing with energy and ways to ameliorate climate change solutions. This was/is, after all, of particular concern to Manchin and his fossil-fuel dependent state.

But Schumer and Manchin found a bit of common ground here. And it includes tax savings for folks who want electric vehicles (EVs), as well as a sought-after change by most of EV makers.

Overall consumer energy areas included: Among the incentives in the bill's energy, aka climate change, sectors are continued and expanded tax benefits for energy- and environmental-conscious consumers.

There are tax breaks for buying energy efficient and electric appliances, clean vehicles, and rooftop-solar systems, as well as investing in home energy efficiency. This will be accomplished via:

Yep, you read that last bullet point correctly. The electric vehicle (EV) tax credit lives. Even for some vehicles that saw the tax credit phased out on their most popular autos.

It also removes the current 200,000 vehicle cap before triggering a phase-out of the tax credit. That's a major win for auto makers Tesla, Toyota, and General Motors, which have already hit that sales mark.

The bill also expands the eligible vehicle market to include all manufactured in North America. An earlier proposal was United States specific.

Some EV limits: But before you rush out and buy a climate-friendly vehicle, you need to note some of the limits.

There's also an income cap for the purchasers. Credits would be capped for a single buyer of a new EV making more than $150,000. Jointly filing taxpayers would see their new EV credit capped if their a combined income is $300,001 or more.

Timing matters, too: Even if you can claim the full credit, you also need to pay attention to the calendar. The Inflation Reduction Act's EV et al credit changes kick in for eligible vehicles placed into service on Jan. 1, 2023, or later.

This means you can't get the credit for the most popular eligible autos that already hit the original credit phased out numbers. The reset doesn't start until next year.

But the good news is that if it's a Tesla you have you heart set on, you now have a few months to save up for that purchase. That's a good personal economic move, since even with the tax credit, Elon Musk's autos tend to be at the top end of the price scale.

And you might want to go ahead and start looking and place an order. There's also a waiting period for delivery.

Final vote still to come, and not a sure thing: You also should wait until this bill clears Congress. Sure, Biden, Schumer and Manchin are all talking up the measure, but it has to make it through the Senate and House before the president can sign it into law.

One of the major potential roadblocks along that route is clearing the Senate parliamentarian's inspection to ensure it can go to that chamber for a vote under reconciliation. That way, the bill would need only a simple majority, not the usual 60 votes, to pass the Senate.

If and when the Inflation Reduction Act of 2022 gets through the Senate (Schumer predicts that will happen next week), it then it goes back to the House.

On that side of Capitol Hill, however, there's potential opposition from Representatives, including some Democrats, who earlier vowed to vote against any bill that doesn't ease the $10,000 federal itemized tax deduction cap on state and local taxes (SALT).

The Schumer/Manchin measure doesn't address SALT. With Democrats holding such a slim House margin, these members of Congress could doom the bill.

So keep window (or online) shopping for your EV, but don't do anything to get it. Yet.