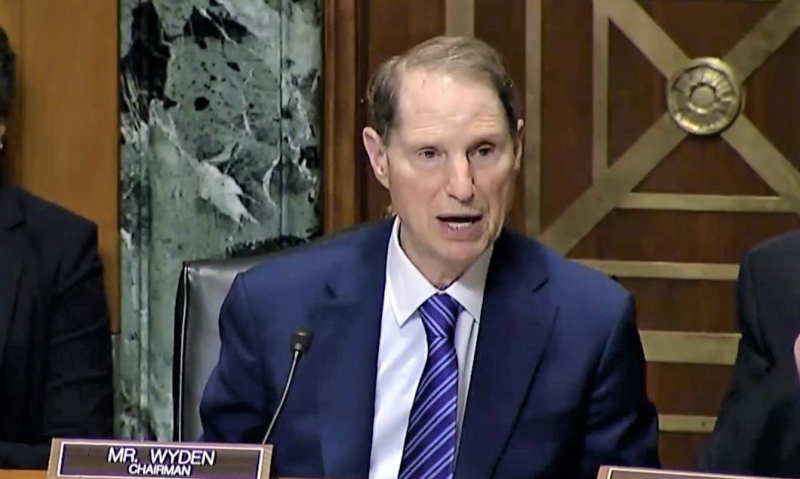 President Joe Biden's three-month gas tax holiday seems to be sputtering, so some are turning their attention to another energy approach. They want to impose a windfall profits tax on oil companies.

"Exxon made more money than God this year," Biden said in a June 10 address before Port of Los Angeles dockworkers and union representatives, but they are not using those profits to drill more.

Biden followed that appearance with a letter to top oil executives urging they boost the supply of gasoline, diesel and other refined products on the market to combat rising prices.

One of them is Sen. Ron Wyden, the Oregon Democrat who chairs the Senate Finance Committee. Wyden recently floated a proposal that would apply a 21 percent additional tax on oil companies' excess profits.

Excess profits, per the still-in-the-works bill, would be determined by subtracting a normal return of 10 percent on expenses from current profits. The tax would apply only to companies with more than $1 billion in revenue that generate such excess profits.

The surtax would be on top of the current the 21 percent tax rate for U.S. corporations, boosting affected oil companies' total tax rate to 42 percent.

That's a massive increase from Biden's Build Back Better (BBB) bill passed by the House and awaiting Senate action. The BBB measure, which has since been rechristened Building a Better America, calls for a 1 percent buyback tax.

The Senator also wants to eliminate the last-in-first-out (LIFO) inventory accounting method, which would trim companies’ ability to deduct the cost of their most recently added, and highest-cost, inventory prior to older, and often lower-cost, layers.

It's not clear as to whether the LIFO elimination provision would apply generally to all businesses, or only to large fossil fuel firms.

"While Americans pay more to fill up their gas tanks, Big Oil companies are raking in record profits, rewarding their CEOs and wealthy shareholders with massive stock buybacks, and using special loopholes in the tax code to pay next to nothing in taxes," Mr. Wyden said in a statement.

Roadblocks on windfall oil profits route: The reality is that Wyden's proposal is not likely to get a lot of traction in the ostensibly evenly divided Senate.

Also, some economists warn that such a tax is bad policy and, in fact, could backfire.

"It would discourage investment, not only because energy companies would have less profits to invest, but more importantly it creates a significant amount of uncertainty with regard to future profitability," Mark Zandi, primary financial expert at Moody’s Analytics, told CNN. "It would make them much less likely to invest in the long run."

Since the start of this week, the national average for a gallon of regular gasoline has decreased by four cents to $4.94, according to AAA's Gas Prices website.

The fuel cost tracking section of the motoring group also noted today that while the U.S. Energy Information Administration "will not release gasoline demand/supply and domestic oil inventory levels data this week due to 'systems issues,' … if gas demand continues its downward trend from the previous week, it may contribute to pump price decreases this week."

The daily national gas price snapshots are just that, a moment of a particular time. True, the price of a gallon of gas is up substantially from last summer's holiday driving season. But they also are trending downward a bit right now.

If pump prices continue to drop, even incrementally, short-attention span motoring constituents could ease some political pressure on Capitol Hill and the White House to act. Yeah, not necessarily reasonable, but whoever said the American voting public was reasonable.

And voters' immediate concerns when it comes to both the gas tax holiday and excess profits tax are important. If they aren't pushing for the taxes, lawmakers might tap the legislative brakes a bit more, slowing down a process that already typically takes a slow road to enactment.