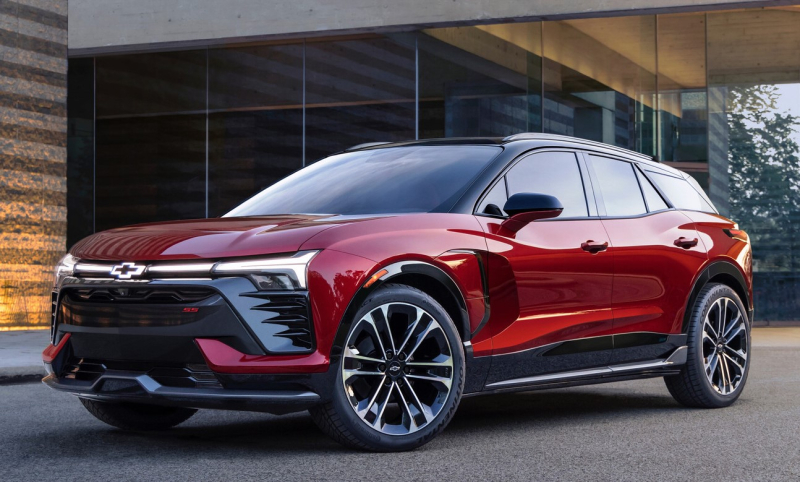 General Motors offered a sneak peek this week of the 2024 electric Chevrolet Blazer, due to be fully revealed next month. The above photo of the family-sized, SS performance Blazer EV model, expected to go on sale in spring 2023 starting at around $40,000, was tweeted by GM CEO Mary Barra.

Regardless of what you think of Elon Musk, he's made Tesla the electric vehicle (EV). Even if you can't afford one, whenever someone says EV, it's the first vehicle most of us envision.

Meanwhile, the other automakers are working to get some of the attention and, of course, customers.

The car companies would be better able to do that if the current $7,500 federal EV tax credit cap was eliminated. The leaders of those companies — specifically, the CEOs of Ford, General Motors (GM), Stellantis (the parent company of Chrysler, Jeep, and Ram, among other autos), and Toyota — make that, and other points, in a recent letter, first reported by Reuters, to Congress.

Current EV tax break: The consumer tax credit for purchasing an electricity-powered ride phases out after a manufacturer sells 200,000 of the vehicles.

So far, GM and Tesla have hit the cap, meaning they can't use it as a sales promotion. Ford and Toyota, which went through a similar tax and sales situation almost 16 years ago with its hugely popular Prius hybrid, could hit the EV sales-mark cap this year.

In a letter Monday, June 13, to House and Senate leaders, the auto company CEOs said they have pledged to invest more than $170 billion through 2030 to bolster development of electric vehicles, as well as hybrids and plug-in hybrids.

Removing the per-automaker 200,000 cap on EVs that triggers the ends the tax credit would help in their efforts, according to the car industry heads.

"Recent economic pressures and supply chain constraints are increasing the cost of manufacturing electrified vehicles which, in turn, puts pressure on the price to consumers."

"The coming years are critical to the growth of the electric vehicle market and as China and the EU continue to invest heavily in electrification, our domestic policies must work to solidify our global leadership in the automotive industry."

Instead of the sales cap, they manufacturers are seeking a credit "sunset date set for a time when the EV market is more mature."

They also argued that in addition to incentivizing people to buy EVs, eliminating the cap would provide certainty to auto industry workers.

Plugged in to political considerations: The reference to autoworkers was an obvious political comment to remind Representatives and Senators of jobs for their constituents.

And the EV tax break push comes as the sector, which once had bipartisan support, has faced some recent defeats on Capitol Hill.

Things started off on a positive note when President Joe Biden took office. Biden, already a car aficionado, albeit of vintage fossil fuel Chevy Corvette Stingrays, vowed shortly after his inauguration to replace the bulk of the federal government's fleet of vehicles with made-in-America EVs.

This April, Biden invoked the 1950 Defense Production Act to boost production of lithium and other minerals needed to produce EV batteries.

Biden also has supported at various points in his young administration other EV tax proposals. They include increasing the current tax credit to as much as $12,500; a $4,500 tax incentive for union-made, U.S. assembled EVs; a 30 percent credit for commercial EVs; a $4,000 used EV tax credit; phasing out credits for EVs made outside the United States; and making the current credit refundable.

But the tax breaks, like almost every other issue in the United States now, have become more politically polarized.

Even with generally supportive Democrats nominally in charge of the House and Senate, Democratic Sen. Joe Manchin, whose West Virginia constituents rely on fossil fuels for much of their economic base, is not keen on extending EV credits.

If Republicans retake either or both the House or Senate in fall's midterm elections, hope for extending alternative fuel tax breaks dim dramatically.

So the auto industry is taking one, perhaps last, shot at continued, expanded tax relief for its electric vehicle endeavors, just as American motorists are dealing with $5 a gallon gasoline.