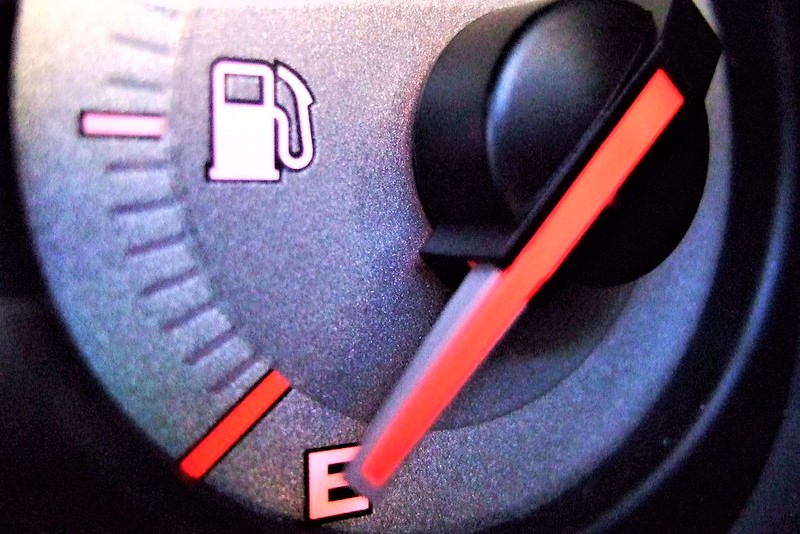 Nowadays, you might have to empty your wallet to fill up your car's tank. However, federal gas tax relief or other help might be available as soon as this week. (Photo by Jen R via Flickr CC)

On my way to an appointment today, I passed two gas stations. Both advertised regular at $4.69 a gallon.

Yes, my area of Austin, Texas, has escaped (so far) the $5 per gallon average that recently was recorded across the United States. Nationally, the per gallon price for regular has since dropped to $4.981. Yay?

And yes, I stopped at one station and topped off my car.

I'm fortunate in that I work from home and don't drive that much. The run-up in gas prices this year hasn't affected me that much.

But relatively cheap fuel and free parking are among the holy grail for vehicle owners. So, like most American motorists, I'm innately driven to find, and purchase, the lowest priced gasoline possible.

That's one reason what a federal gas tax holiday, which earlier this year was seen as a non-starter, is looking more likely. The Biden Administration also is exploring other help for drivers, such as rebate cards.

Feds to follow state gas tax holiday lead? Several states already have enacted or are working on gas tax holidays. Now the White House, which was meh earlier this year about federal fuel tax relief, now says a decision could come this week.

In addition to temporarily suspending the federal 18.4 cents per gallon (cpg) tax on gasoline the Biden Administration also is looking at distributing gas rebate cards.

As for the rebate idea, yes, that is the Internal Revenue Service, the go-to agency when it comes to sending anything to the U.S. populace, you hear screaming. I feel for the IRS, and hope this time the Transportation Department bears the burden of the project. I have faith in Secretary Pete Buttigieg and his staff!

Either way, President Joe Biden today told reporters who followed him this holiday weekend to his Rehoboth, Delaware, home, "I hope to have a decision based on the data I'm looking for by the end the week."

Across the TV dial on CNN's "State of the Union," Energy Secretary Jennifer Granholm said a gas tax break is "one of the tools" the Administration is looking into to offer U.S. consumers relief from high gas prices. However, Granholm also noted the importance of the federal levy in funding upkeep of the country's highways.

Gas tax bill pending: If Biden opts for a federal gas tax holiday, it can use as its framework legislation already introduced in both Congressional chambers.

Rougher ride for rebate cards: No one has released any details on possible gas rebate cards. When the idea was made public by the Washington Post last week, the individual who spoke anonymously to the newspaper stressed that the cards and other measures were being explored in a preliminary way.

Hypothetically, the cards would subsidize the pump prices of gasoline. But opponents of the cards, including some in the Democratic Party, immediately criticized the idea. The potholes in front of the cards include:

While any help paying for gas would be welcome by drivers, the cards could keep pump prices high and worsen inflation.

As for a temporary tax holiday, opponents say it realistically won't help consumers much, but will cost the finally enacted infrastructure law a lot. The holiday would "blow a $26 billion hole in the Highway Trust Fund," House Transportation Chair Peter DeFazio (D-Oregon) told Politico back in February when the idea was first floated.

Plus, gas tax holidays and rebates really don't offer drivers much relief, according to at least one study.

"Although payments to consumers are better than suspending gas taxes for many reasons, neither type of policy is ideal, and neither addresses the main, underlying issue: our car dependence," says Jorge González-Hermoso in his analysis for the Urban Institute.

González-Hermoso says the problems with gas tax holidays start with the premise that they help consumers. That's not necessarily true.

The average gas tax across all states, according to the Urban Institute report, is 31 cents a gallon or 7.75 percent of the average price. Using Maryland's one-month gas tax holiday as an example used by TaxVox blog, an Old Line State driver would have had to use 20 gallons of gas a week to save just $30 for the full holiday month.

Still, as inflation refuses to loosen its grip and the mid-terms get closer, the chances of performative gas tax relief are increasing.