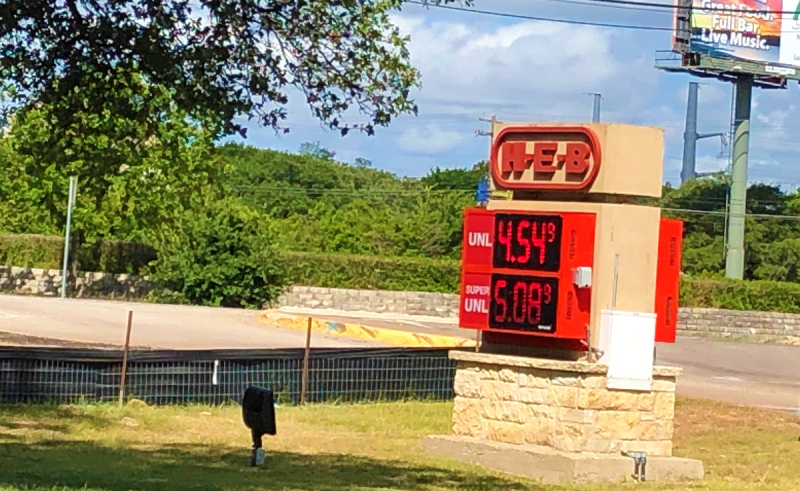 The White House's time frame, outlined in a fact sheet, calls for the 18.4 cents per gallon (cpg) gasoline and 24.4 cpg diesel non-collection period to start in July and run through September. In announcing temporary excise tax holiday proposal, Biden said it was designed to help motorists during the busy summer travel season.

House and Senate gas tax relief bills were introduced earlier this year, giving Congress a jump start on the legislative process if it is so inclined. H.R. 6787, sponsored by Rep. Tom O'Halleran (D-Arizona) is pending in the Ways and Means Committee. The Senate counterpart, S. 3609 by Sens. Mark Kelly (D-Arizona) and Maggie Hassan (D-New Hampshire), is awaiting action by the SFC.

Figuring the possible relief: Numbers crunchers note that if the federal gas tax savings were fully passed along to consumers, U.S. drivers would save roughly 3.6 percent at the pump based on the current $5 per gallon average.

However, prices already are dropping in some places, as noted in my photo from earlier today at the top of this post.

Plus, such a direct savings correlation won't really happen. Note the calculation caveat "if fully passed on to consumers." 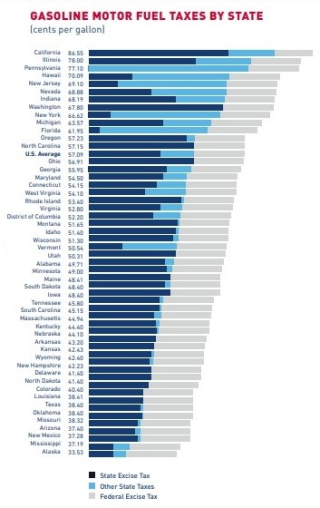 The graphic at left from the latest American Petroleum Institute analysis of nationwide gas tax amounts by state shows the variations.

Several states have enacted or are working on similar holidays, the patchwork of gas tax holidays will make it hard to determine just how much savings will be felt nationwide.

Still, Biden said the tax holiday will provide at least some short-term relief, a key concern as consumers already are facing other price increases due to inflation.

"I fully understand the gas tax holiday alone is not going to fix the problem," he said. "But it will provide families some immediate relief, give them a little bit of breathing room, so we continue working to bring down prices for the long haul."

Infrastructure costs also a concern: One of the strongest arguments against a halt, even temporary, to the fuel tax is the cost to the Highway Trust Fund.

The White House acknowledged those concerns in its fact sheet, calling on Congress to ensure in tax holiday legislation that the relief "has no negative effect" on Uncle Sam's primary mechanism for building and repairing the nation's roads.

"With our deficit already down by a historic $1.6 trillion this year, the President believes that we can afford to suspend the gas tax to help consumers while using other revenues to make the Highway Trust Fund whole for the roughly $10 billion cost. This is consistent with legislation proposed in the Senate and the House to advance a responsible gas tax holiday."

Rough legislative road ahead: But the actual passage of those bills is not a sure thing.

Most Republicans are opposed, on policy and/or political grounds, to the gas tax holiday idea. Even House Speaker Nancy Pelosi (D-California) was noncommittal on Biden's request.

But if gasoline prices don't drop much in the next few weeks, lawmakers might give in to constituent pressure.

I agree with my #TaxTwitter pal Harold Justice that such pandering could politically backfire.

That will be a dumb way to lower price of gas because of the outcry when the tax is put back on. I hate pandering politicians that make short sided decisions.

Such reactionary legislating also makes for bad tax (and other) policy. The potential for bad policy, however, has rarely stopped politician's, especially in an election year.

As vehicle ownership is higher among white households compared to black households, the benefits of such a tax cut would disproportionately benefit whites. The idea needs to be called for what it is, racist. Households not owning vehicles tend to be less affluent than those that do so we can also call it a tax cut for the wealthy.