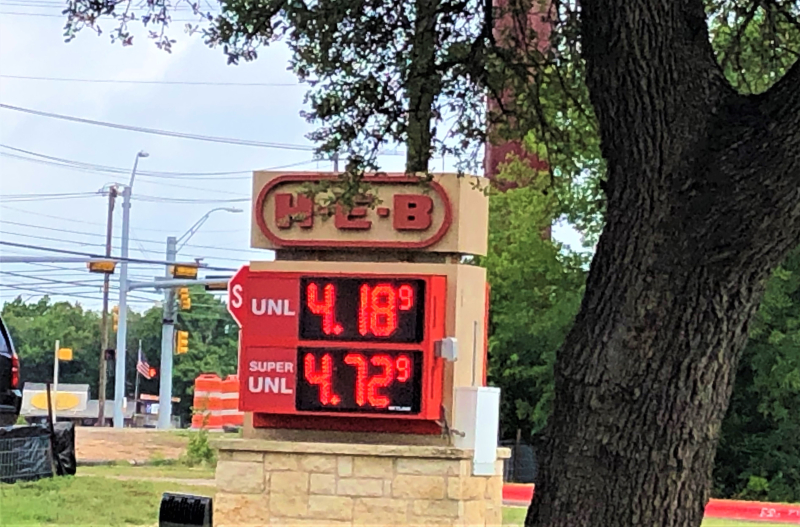 Shortly before the Memorial Day holiday, gasoline prices surpassed $4 per gallon in every U.S. state for the first time. Transportation experts predict gas soon will exceed $5 per gallon nationally.

Higher fuel prices didn't stop people from hitting the road during the Memorial Day break. But that was a special travel event. It was a three-day holiday after years of COVID pandemic suppressed transportation.

Just a week later, people's lives are back to what passes for normal.

More offices are open and calling work-from-home employees back into office. Those workers, many of whom were among the millions on the road over the recent holiday, are unhappy not only about having to go back to their cube farms, but also with having to pay more for their resumed commutes.

State gas tax relief actions: That concern by drivers (also known as constituents) has prompted state lawmakers to enact or at least look into giving their residents (also known as voters) a bit of relief from skyrocketing pump prices.

Part of those prices come from state gas tax and fees, which averaged 38.69 cents at the start of this year, according to the American Petroleum Institute.

More than half of the states — 23 at last count — have taken some action or are looking into lowering their fuel taxes at least for a while. A handful of states have been successful.

Here's a look at the states that had, have, or soon will see some gas tax breaks.

New York drivers started seeing slightly lower prices for gas and diesel on June 1. The suspension of its 16 cents per gallon (cpg) gas tax runs from through December. State officials are encouraging local officials to temporarily halt their collections, too. Finances, however, might stall more-local fuel tax relief. On the state level, Democratic Gov. Kathy Hochul has said the tax cut would cost the Empire State $585 million.

Connecticut drivers, who originally were facing a June end of the Nutmeg State's suspension of its 25 cpg gas tax, get a few more months of relief. In May, a budget adjustment bill became law. It included a provision extending the state gas tax holiday through November.

Georgia motorists also got extended pump price relief. The Peach State's 29 cpg gas and 33 cpg diesel taxes were supposed to expire at the end of May. But just before that deadline, Republican Gov. Brian Kemp issued an executive order extended the fuel tax relief to July 14.

Michigan, home of what once was the United States' auto manufacturing hub, could soon see gas tax relief. Maybe. An earlier proposal to suspend the Great Lakes State's 27.2 cpg gas tax for six month was vetoed by Democratic Gov. Gretchen Whitmer, who prefers suspending the state's 6 percent sales tax on fuel instead. Michigan's Senate has since passed a three-month hold on gas tax collections. It is awaiting state House action. If this bill gets Whitmer's approval, which isn't guaranteed, the gas tax holiday would run from mid-June through mid-September.

Florida drivers will get their one-month fuel tax holiday this fall. The Oct. 1-31 suspension of the Sunshine State's 25.3 cpg gas tax is timed to benefit year-round residents, rather than the state's summer tourists.

However, drivers in the first state to enact a gas tax holiday are out of luck when it comes to more transportation tax help.

Maryland was first in with gas tax relief. It also was first out. The Old Line State suspended its fuel taxes, 36.1 cpg on gas and 36.85 cpg on diesel, on March 18. The short-term emergency act expired on April 16. Republican Gov. Larry Hogan and other state officials tried to push through an added 60 days of fuel tax relief, but were rebuffed by the full state legislature.

This excise tax, which goes into the Highway Trust Fund to help maintain interstate highways, hasn't been hiked since 1993. An attempt to take the other route and suspend its collection is filled with legislative potholes.

And it looks like these federal gas tax relief bills are having trouble just getting started. Both were introduced in mid-February. Since then, neither the tax-writing House Ways and Means nor the Senate Finance committees have taken any action, despite urging from six Democratic governors — Michigan's Whitmer, Wisconsin's Tony Evers, Minnesota's Tim Walz, Colorado's Jared Polis, New Mexico's Michelle Lujan Grisham, and Pennsylvania's Tom Wolf — for Congress to suspend the federal gas tax through the end of 2022.

At the recent Mackinac Policy Conference, an annual gathering of business leaders and policymakers on Mackinac Island that's organized by the Detroit Regional Chamber, U.S. Transportation Secretary Pete Buttigieg didn't immediately dismiss the idea of federal gas tax relief. However, he cautioned that any immediate action needed to be taken with the future in mind.

"There are a lot of different ideas and proposals in Congress. I think what we have to do is make sure that any solution that we arrive on contemplates the long term as well," Buttigieg said, according to a Detroit Free Press report.

International efforts, also: The Biden Administration also is hopeful that the decision yesterday, June 1, by the group of oil-producing nations known as OPEC Plus to a larger increase in supply than originally planned for July and August will help.

President Joe Biden also is scheduled to visit Saudi Arabia this month. Among the issues on the U.S. agenda is additional ways to ease the global fuel crunch.

Will these international efforts translate to lower costs for U.S. drivers? Maybe.

Or maybe not. Immediately after the OPEC Plus supply increase announcement, the price of oil rose.