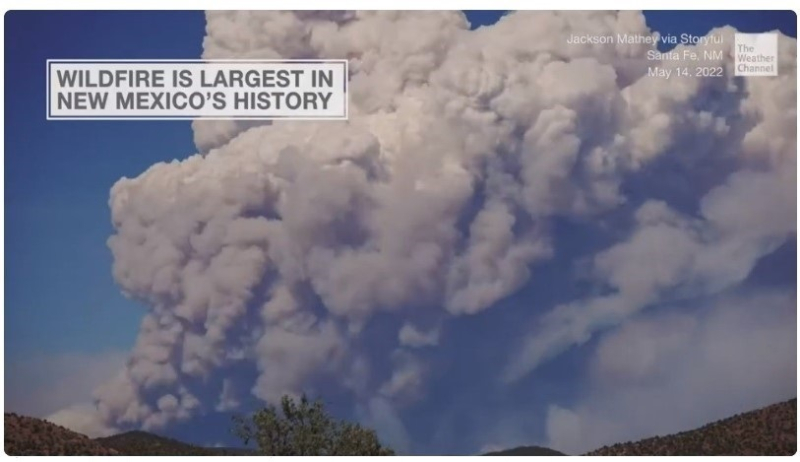 The Hermits Peak and Calf Canyon wildfires that have merged and been burning a large swath of northern New Mexico for weeks now has been designated as the largest in the state's history.

The combined blazes, driven by straight-line winds, have engulfed nearly 300,000 acres, or around 469 square miles, of the Land of Enchantment as of this morning. Only around a quarter of the fire area has been contained, according to InciWeb, a U.S. government interagency all-risk incident information management system.

The expanse led Federal Emergency Management Agency (FEMA) to declare a major presidential disaster in five New Mexico counties. The Internal Revenue Service has followed with tax relief for those areas, which so far include Colfax, Lincoln, Mora, San Miguel, and Valencia counties. 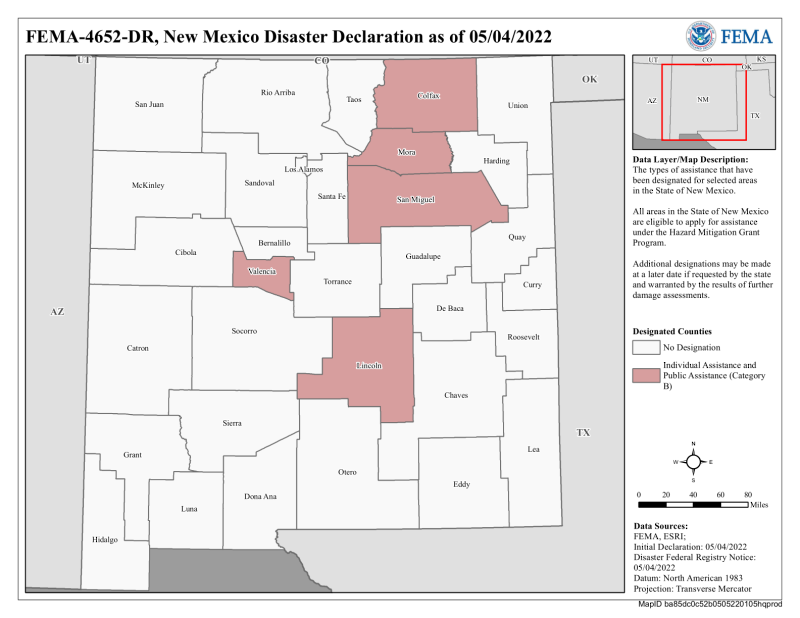 If you want to keep an eye on the fires, you can follow New Mexico Fire Information and the National Wildfire Coordinating Group.

Also, I have to point out that the forests of the Capitan Mountains in Lincoln County are the birthplace of the first, living symbol of  Smokey Bear.

Delayed filing, paying deadlines: The IRS announcement says individuals and businesses in the disaster designated counties now have more time to deal with tax deadlines that fall between the fires' start on April 5 and Aug. 31.

The new due day for these tax responsibilities now is Wednesday, Aug. 31.

That means taxpayers don't have to file a variety of tax forms or returns or pay associated due taxes until the end of August.

Individual taxpayers in the five FEMA-declared counties who were unable to meet last month's April 18 regular individual tax filing deadline don't have to worry about late filing and payments.

If that's you, and you get a late filing or late payment penalty notice from the IRS about your oversight, call the telephone number on the notice to have the IRS abate the penalty.

Affected taxpayers also have until Aug. 31 to make IRA contributions for the 2021 tax year, as well as pay estimated taxes that were/are due on April 18 and June 15.

Businesses in the disaster areas that usually faced/face quarterly payroll and excise tax returns on May 2 and Aug. 1 also have those deadlines extended to Aug. 31.

The IRS notes that penalties on payroll and excise tax deposits due from April 5 to Aug. 30 will also be waived as long as the deposits are made by Aug. 31.

However, if you're not technically in the designated disaster areas, but the records and other info you need to meet a tax deadline during the postponement period are in the area, let the IRS know. You can call the IRS toll-free at (866) 562-5227 to discuss your situation.

Also, individuals who are in the disaster areas providing relief services as part of a recognized government or philanthropic organization and who would like the same tax relief, you also should talk with the IRS.

And taxpayers who are in an extended-filing disaster area, but get a late-filing or late-payment penalty notice from the IRS should call the number on the notice to have the penalty abated.

This means New Mexico filers under the fire disaster designation can claim any qualifying wildfire or straight-wind losses on their 2021 returns that now are not due until Aug. 31, or wait and claim them on their 2022 taxes due in April 2023.

In all major disaster cases, you need to run the numbers to make sure that your choice of tax year provides you with the most advantageous tax result. You can read more about making major disaster loss tax claims in my earlier post on what to consider when making a major disaster tax claim.

As for any New Mexico taxpayers who did meet last month's April 18 Tax Day, but now want to claim fire losses on their 2021 return, they can file an amended return using Form 1040-X.

Regardless of which tax year filing you choose to make the disaster loss claim, the IRS asks that you note the disaster and FEMA declaration number on any return claiming a loss. Write "New Mexico Wildfires and Straight-line Winds" in bold letters at the top of the form, and add the FEMA designation DR-4652-NM.

No cost for tax docs: If you need prior year tax documents to file your fire-related return, the IRS says it will waive its usual fees for such requests.

Finally, if you're in the New Mexico fire disaster area and under audit, if/when you're contacted by the IRS regarding an examination or collection matter, explain how the disaster has impacted you so that the IRS agent can take that into account.