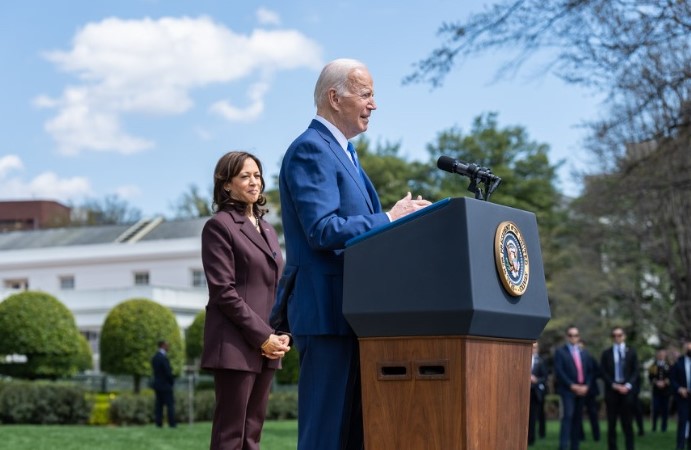 The United States' top two elected officials were among the millions who filed 2021 tax returns this year.

President Joe Biden and First Lady Jill Biden reported on their joint Form 1040 adjusted gross income of $610,702. After the figuring was done, they paid $150,439 in federal income tax, which was a 24.6 percent effective tax rate.

Vice President Kamala Harris and her husband Douglas Emhoff reported more than double the Biden's filing. Harris and Emhoff's joint return revealed earnings of around $1.7 million in earnings, and paid $523,371 in federal taxes. That put the effective tax rate for the Veep and her hubby at 31.6 percent.

The White House released the documents, which were signed by the Bidens on April 13 and Harris and Emhoff on April 14, on April 15.

The Bidens also received taxable income from the President's retirement accounts, nearly $53,000 in pension benefits from his years in the U.S. Senate service and more than $46,000 in Social Security benefits.

As expected from higher earning taxpayers, the Bidens itemized. Their Schedule A included deductions for $17,394 in charitable gifts. The largest Biden donation was $5,000 to the Beau Biden Foundation, a public charity named after the president's late son and which was created to help protecting children from abuse. The remaining donations went to nine other nonprofits.

Harris/Emhoff earnings: The joint return of Harris and Emhoff reported wage income of $445,449. That included her Harris vice presidential salary of $215,548. It also was a bit smaller than the usual $230,700 VP salary due to her taking office on Jan. 20. Harris also reported earning $452,664 from writing efforts on the memoir "The Truths We Hold."

Emhoff earned $164,740 from his job teaching at Georgetown Law. He also got $582,543 in self-employment income for his work legal work at the law firms DLA Piper and Venable. He left both of those jobs when Harris was sworn in as vice president.

The couple also netted more than $319,000 from the sale of Harris' San Francisco condominium.

In the donation department, the Schedule A for Harris and Emhoff shows they donated $22,100 to charity last year.

And both couples checked "no" to the Form 1040 question about virtual currency transactions last year.

Multiple state taxes, too: Another filing feature both the Bidens and Harris/Emhoff share is paying state taxes.

The Bidens, whose permanent residence is in Delaware, paid the First State $30,765 in income taxes. Dr. Biden also paid $2,721 in Virginia income tax thanks to her teaching position with NOVA Community College in the District of Columbia suburbs.

Harris and Emhoff paid, of course, California state taxes. That amount came to $59,754. Emhoff also paid $2,662 to New York in connection with his work as an attorney there.

Harris and Emhoff also paid $120,517 in combined California income tax and $2,044 to New York from Emhoff's income there as a lawyer. A bigger bite went to the non-state of Washington, D.C., which got $54,441 in tax from Emhoff for his teaching at Georgetown University in the national capital.

But rather than select one from the myriad numerals on the returns of Joe and Jill Biden and Kamala Harris and Doug Emhoff, I'm going with two as this weekend's By the Numbers featured figure.

That number represents not only the returns from our top elected officials, but also the second year that we've been able to see the personal tax filings of our country's top leaders. After the previous administration's tax stonewalling, it's again a welcome return of a tax tradition that we should never take for granted.