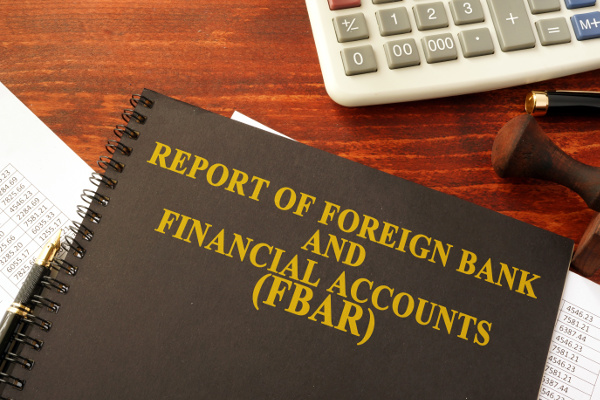 In 2016, a law change moved the due date for the required filing of Reports of Foreign Bank and Financial Accounts, or FBAR, to coincide with the annual April individual federal tax return deadline.

FBAR information is the federal government's way of tracking foreign bank and financial accounts owned by U.S. taxpayers. Since Tax Day gets a lot of attention every year, the date change was seen as a way to make sure more people were aware of FBAR filing requirements.

So FBAR filings this year are due on April 18, a few days later than usual due to the Emancipation Day holiday in Washington, D.C.

But don't freak out if you've just discovered you have to submit Financial Crimes Enforcement Network (FinCEN) Form 114 in just a few days. As with regular Form 1040 filings, you can get an extension to file FinCEN Form 114.

Even better, the additional six months for FBAR filing is automatic. No special extension form is needed.

Whenever you are ready to file Form 114, here are some frequently asked questions about FBAR and the filing process.

What is FBAR? The Report of Foreign Bank and Financial Accounts is an official financial filing that was created to combat tax evasion by owners of assets in non-United States institutions.

Although it involves money that is taxable, Form 114 isn't filed with the Internal Revenue Service. It is submitted to the aforementioned FinCEN.

FinCEN is the U.S. Treasury Department bureau that collects and analyzes information about financial transactions in order to combat domestic and international money laundering, terrorist financing, and per its name other financial crimes. It's been doing that job, including processing FBAR filings, under authority of the Bank Secrecy Act since 1970.

Who has to file a FBAR? Two things trigger the FBAR fling requirement.

The first is the ownership or financial interest or authority over any foreign bank accounts, including those in a branch abroad of a U.S. financial institution. You also could be required to report other non-U.S. holdings such as —

These accounts generally must be reported even if the accounts don't generate any taxable income.

Financial interest in an asset is determined by who is the owner of record or legal title. Signature authority means that you have some level of control over the assets by direct communication with the institution.

The FBAR law also has a broad definition of person for reporting purposes. Under the law, a U.S. person is a citizen or resident of the United States (including Green Card holders and resident aliens), or any domestic legal entity, such as a partnership, corporation, limited liability company, estate or trust.

As for what constitutes a foreign country, the law says that's any area outside the United States, Indian lands as defined in the Indian Gaming Regulatory Act, and the following U.S. territories and possessions:

Then there's the amount of overseas assets. Which brings us to the next FAQ.

How much money counts? Whenever the IRS or its parent agency, the U.S. Department of the Treasury, is involved, it's always about the money. In the case of FBAR, the amount of foreign funds or assets also figure in the triggering of the filing.

FinCEN looks at the cumulative balance, meaning if you have two foreign financial accounts with a combined balance exceeding $10,000 at any one time in the tax year, both accounts would have to be reported.

Then the IRS and FinCEN also bring another consideration into play, maximum value. Uncle Sam wants this amount, too.

If you have/had a financial interest in more than one account, each account must be valued separately.

When recording the maximum value of accounts, record all amounts as U.S. dollars rounded up to the next whole dollar, regardless of the cents. For example, $25,500.25 in an account at its highest point would be recorded as $25,501.

If an account is in non-U.S. currency, convert the maximum account value into dollars. You can use the Treasury Reporting Rates of Exchange to determine the dollar value of foreign currencies.

What records are needed? You also must keep You must keep records for each account you must report on an FBAR that establish. The information required includes:

The law doesn’t specify the type of document to keep with this information. It can be bank statements or even a copy of the FBAR you filed. Just make sure your documentation has all the necessary data.

You must hang onto these records for five years from the due date of the FBAR.

How do I file FBAR? FBAR filing, or specifically FinCEN Form 114, is not filed with the IRS. It's filed directly with FinCEN.

It also must be filed electronically at FinCEN's BSA (Bank Secrecy Act) E-Filing System website. Below is an excerpt of the page you'll see when you head there.

Once you start the Form 114 filing process, note that the online FBAR form does not allow you to save your progress during completion. After you submit it, you'll be able to download a read-only copy of your filing.

And even though it's not an IRS form and it's only filed electronically, FBAR reporting earns a spot on the Talking Tax Forms page.

What if I don't report an account? Even though FinCEN offers a filing due date cushion, it eventually wants your foreign account information.

If you fail to provide it, you'll pay.

If you are required to file an FBAR and don't do so, you could face a civil penalty of up to $10,000. The penalty could be waived if you can show reasonable cause for missing the filing.

But if you willfully fail to report an account or don't provide required account identifying information, the penalty price goes up. You could be subject to a civil monetary penalty equal to the greater of $100,000 or 50 percent of the balance in the account at the time of the violation.

Is FBAR the only foreign assets form I must file? Much respect to all the ol' blog's savvy readers who right about now are wondering about another foreign financial holdings tax requirement. That's the Foreign Account Tax Compliance Act or FATCA.

Depending on your foreign holdings and amounts, you might need to file per FATCA, FBAR or both.

FATCA's Form 8938, when required, is sent along with your annual income tax return. Again, this year that deadline is April 18.