Ukrainian taxes, Russian tanks, oligarch yachts, and how you can help war victims 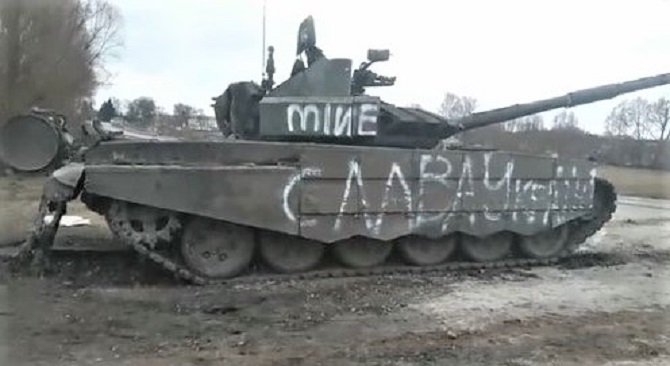 The Russian invasion of Ukraine is the latest reminder that wars have been around as long as humans. Taxes also have been part of the clashes, either fighting against them as in the American Revolution, or countries' creating or increasing them to pay for the battles.

So it's no surprise that taxes have captured public attention — OK, the social media tax community's attention — as Ukrainians fight to keep their nation out of Vladimir Putin's hands.

Specifically, it's the announcement by Ukraine authorities that citizens who have seized Russian tanks don't have to declare the military equipment on their tax forms.

Message from the Ukrainian tax office: “Have you captured a Russian tank or armored personnel carrier and are worried about how to declare it? Keep calm and continue to defend the Motherland! There is no need to declare [them as income].” https://t.co/xduC7YlXa9

Pay attention to tax details: Of course, taxes being taxes regardless of where they are assessed, there are some caveats.

Ukraine's National Agency for the Protection against Corruption, via the Ukraine arm of the Interfax news service, notes that there is "no need to declare the captured Russian tanks and other equipment, because the cost of this ... does not exceed 100 living wages (UAH248,100) ($8,298)."

Also, say Ukrainian tax officials, there is no need in the case of taken Russian tanks to submit reports of significant changes in property status within 10 days.

Here's some tax situation elaboration on the tax exclusion of combat trophies, presented with appropriate national pride and encouragement to besieged Ukraine taxpayers.

"Speaking by the letter of the law, combat trophies are not subject to reflection in the declaration for the following reasons: they were acquired not as a result of the conclusion of any type of transaction, but in connection with the full-scale aggression of the Russian Federation on February 24, 2022 against the independent and sovereign Ukrainian state as a continuation the insidious attack of the Russian Federation on Ukraine launched in 2014. Thanks to the courage and victory of the defenders of the Ukrainian state, enemy military equipment usually comes to you already destroyed and disabled, which makes it impossible to evaluate it in accordance with the law on the valuation of property, property rights and professional valuation activities in Ukraine. Therefore, it is also impossible to find out how much such property costs."

The NAPC tax statements (in the original Ukrainian, too, if you're fluent) earn this weekend's Saturday Shout Out top honor, as well as my respect and support.

Additional Shouts go to the coverage of Ukrainian war trophy taxation, starting with the #TaxTwitter conversations noted earlier (here's the link so you don't have to scroll up), as well as in the news reports by The Guardian and Business Insider.

At the state level, Maryland Comptroller Peter Franchot is urging the Old Line State legislature to pass a state income tax credit for contributions to humanitarian aid for Ukrainians.

On Capitol Hill, Senate Finance Committee Chair Ron Wyden (D-Oregon) has outlined steps to hold Russia accountable for its invasion of Ukraine. They include:

Ratting out corrupt asset owners: In regard to that last Wyden bullet point, the United States looks to be getting in on the oligarch Yacht Seize game (thanks for the Yahtzee pun, social media wits).

"If you have info on oligarch assets, tell us, and you'll get to keep a piece," tweeted Massaro.

Kleptocracy asset recovery rewards program coming soon to a US government near you! If you have info on oligarch assets, tell us, and you'll get to keep a piece https://t.co/fHwfX8Blzv https://t.co/wXA95AunbK pic.twitter.com/o5iWSKCbJC

Assistance avenues: Finally, let me stress that all of this tax and war activity is very far down on the list of concerns as Ukrainians literally fight for their lives and their nation's democratic independence.

That's why my concluding Saturday Shout Outs today go to the following items on how you and I can help.

And as we all deal with what's going on in Europe, stay informed, stay engaged, and, most importantly, stay safe.