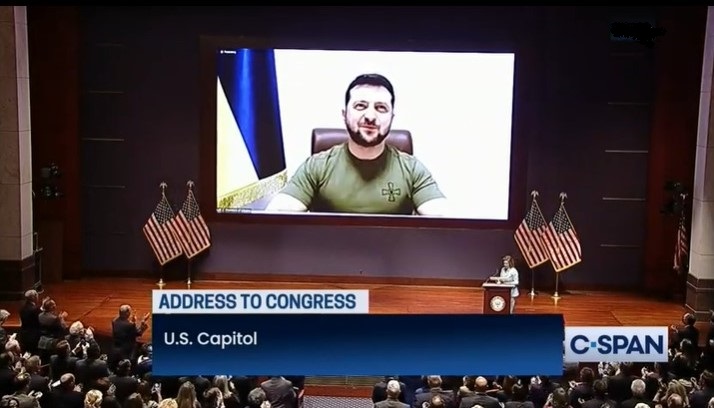 Volodymyr Zelenskyy, president of Ukraine, made an emotional plea to U.S. lawmakers for more help as his country battles Russian aggression. Screenshot of the address from C-SPAN broadcast.

Ukrainian President Volodymyr Zelenskyy spoke directly to members of the U.S. Congress this morning, urging them to do more to protect help his country's efforts to fight Russian invaders.

At one point in the virtual speech, delivered remotely from his country's war-torn capital Kyiv, Zelenskyy called on President Joe Biden to be the world's "leader of peace."

Hours after the emotional plea, Biden responded. He thanked Zelenskyy for his address, and pledged an additional $800 million to Ukraine to boost security measures. This is a follow-up to the $200 million in military aid Biden sent on Sunday.

Stepped-up sanctions efforts: Meanwhile, the United States and other countries continued their fiscal efforts to rein in Russian aggression.

Targeted sanctions against Russia began on Feb. 21 as targeted measures, but have evolved into what global affairs experts say are the most comprehensive set of multilateral economic sanctions ever applied to a major world economy.

The sanctions that have captured the most public attention are those aimed at wealthy Russians who are close to Vladimir Putin. Seizures of many of oligarchs' mega yachts sparked a new social media game dubbed Yacht Seize, from the roll of the dice game Yahtzee.

The descriptive acronym comes from the target of the global agencies — Russian Elites, Proxies, and Oligarchs.

The task force's creation, announced on Feb. 26, consists of the Finance Ministry and Justice or Home Ministry in each member jurisdiction. Each is committed to using their respective authorities in concert with other appropriate ministries to collect and share information to take concrete actions, including sanctions, asset freezing, and civil and criminal asset seizure, and criminal prosecution.

Early successes: Cooperation between the U.S. Government and foreign partners has already yielded notable successes, according the Yellen and Merrick announcement.

"In the last three weeks alone, information provided by U.S. law enforcement to foreign partners has contributed to the restraint of multiple vessels controlled by sanctioned individuals and entities. Collectively, these vessels are estimated to be worth hundreds of millions of dollars," according to the announcement.

"Our sanctions, trade restrictions, and other measures have already imposed significant costs on Russia, its leadership, and those who enabled Putin’s unprovoked invasion into Ukraine," said Yellen. "This multilateral task force will raise those costs even more, by galvanizing coordinated efforts to freeze and seize assets of these individuals in jurisdictions around the world and deny safe haven for their ill-gotten gains."

"We are already working with our international partners to freeze and seize properties belonging to sanctioned Russian oligarchs worldwide," added Garland. "We will continue to work together to take all appropriate actions against those whose criminal acts enable the Russian government to continue its unjust war against Ukraine."

In addition to the launch of the REPO task force, Yellen and Garland said that Treasury, though its Financial Crimes Enforcement Network (FinCEN), will increase its cooperation and intelligence sharing in order to enforce the sanctions.

FinCEN will also release an alert for financial institutions about the importance of identifying and reporting suspicious transactions by sanctioned Russian elites, oligarchs, and their proxies that involve real estate, luxury goods, and high-value assets.

Treasury also today launched the Kleptocracy Asset Recovery Rewards Program. It offers rewards payments for information leading to seizure, restraint, or forfeiture of assets linked to foreign government corruption, including the Government of the Russian Federation.

Treasury's Office of Terrorism and Financial Intelligence administers the program in coordination with Justice and State Departments, and U.S. federal law enforcement agencies.

Treasury's special web page on the Kleptocracy Asset Recovery Rewards Program has details on eligibility for rewards payments and how to submit the relevant information to Uncle Sam.

If you happen to run in such circles and suspect corrupt goings-on, you can let officials know by email at Kleptocracy_Rewards@Treasury.gov, or by calling +1 (202) 622-2050.

Most wanted oligarchs: Finally, in connection with today's virtual global meeting of worldwide agencies participating in REPO, Treasury shared with those official's its list of the 50 individuals who are priorities for the United States.

It also publicly released the names of 28 individuals from the larger list who have been sanctioned by multiple jurisdictions, including the United States.