Don't get your hopes up for a federal gas tax holiday

Even before Russia invaded Ukraine, gasoline prices in the United States were going up due to that Econ 101 basic supply and demand.

Since then, things have returned to, for lack of better words, more normal. Demand for oil and products like gasoline has surged since pandemic lows. But production has not kept up. More people wanting a scarce item means that item's price is higher.

As the prices of fuel and other inflation-affected customer staples starting rising, politicians jointed TV talking heads and economists in noticing, and pontificating, on what must be done.

Just before February's Consumer Price Index, or CPI, showed a 7.5 percent year-over-year increase, several members of Congress announced plans for legislation that would establish a federal gas tax holiday through the end of 2022.

Adding up more than federal taxes: The federal levy is just one component of the price we pay at our local gas station pumps.

There's also a 24.4 cents per gallon tax on diesel fuel. Then states add their own taxes (and fees) on top of Uncle Sam's, meaning that the average driver pays around 39 cents per gallon for gas on top of the federal tax, according to the American Petroleum Institute.

That average obviously varies by state and region. Here in Texas, our pump prices tend to be much lower than, for example, those faced by California drivers. 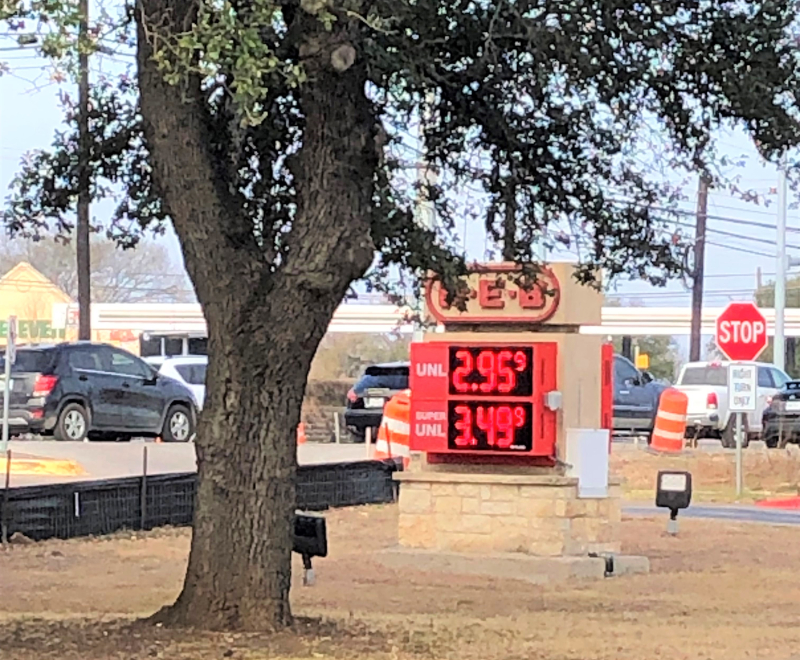 Gasoline prices in my suburban Austin neighborhood on Feb. 22, 2022. (Photo by Kay Bell)

In announcing his support of the federal gas tax holiday bill, California Democratic Rep. Josh Harder cited AAA data showing Golden State drivers pay an average of $4.68 cents per gallon, the highest price in the nation and $1.20 more than the national average.

But its collections have struggled to meet the United States roadway needs, in large part because the gas tax hasn't been raised since 1993.

Some good news is that the Biden Administration's infrastructure bill enacted last November included a one-time transfer of general revenues into the Highway Trust Fund, extending its near-term solvency by five years through 2027.

But those five years will go by quickly. That's one reason that many, on Capitol Hill and in the private sector, say the federal gas tax suspension of even a few months shouldn't, and is unlikely to happen, even with gas prices now going up more in response to the  Russian military action.

The following articles offer economic, political, and energy company outlooks, as well as some advice on how to deal with the increasing cost of topping off your auto's tank.

I agree with those who say this bill won't go anywhere. Plus, I'm skeptical that even if federal gas tax collections were halted temporarily, the few cents savings would be passed on to consumers.

If you're of the same mindset, you might want to start with the money saving tips article first.

Suply & demand does cause price to go up or down. But that one of the causes. When they increase the money supply it will eventually cause price of everything to go. It has done many many times throughout history and the result will be the same. Spend money that a country does not has and print its way to pay for everythng you will end up with inflation. At this moment as I type gold, silver, oil and other commodity are up quite a bit. You are very good with the tax law that why I am here.