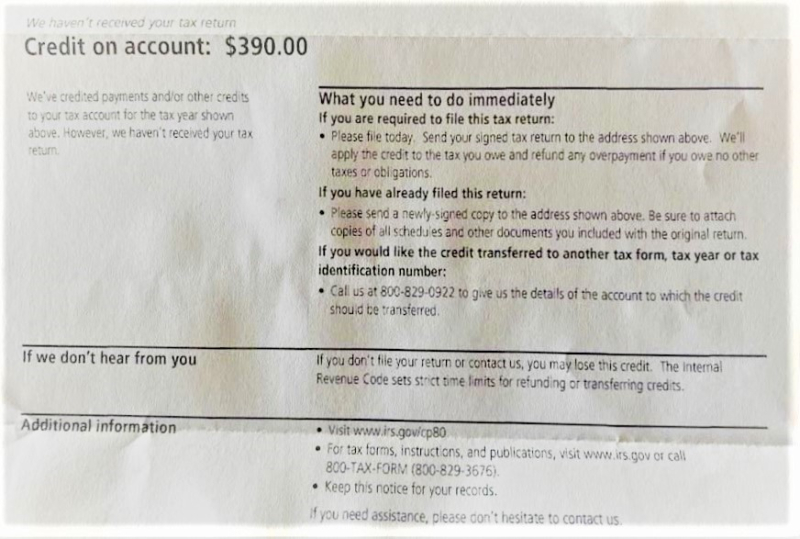 Just before this year's tax filing season officially opened, a group of 11 tax-related groups sent the Internal Revenue Service a letter urging it, among other things, to stop sending some automated notices.

Today, that group, which dubbed itself Tax Professionals United for Taxpayer Relief Coalition, got some good news.

The IRS has agreed to stop sending automated CP-80 notices.

In a statement posted today to IRS.gov, the IRS said:

"…[W]e have already decided to suspend notices in situations where we have credited taxpayers for payments but have no record of the tax return being filed. In many situations, the tax return may be part of our current paper tax inventory and simply hasn't been processed. Stopping these letters — which could have otherwise been sent to thousands of taxpayers — will help avoid confusion."

What and why CP-80s: The notices to which the IRS statement refers are CP-80s, which are issued any time the IRS has a taxpayer's money for a particular tax year, but doesn't have their tax return.

The CP-80 notice tells the taxpayer, "Please file today. Send your signed tax return to the address shown on the top of your notice." It also warns, "If you don't file your return or contact us, you may lose this credit. The Internal Revenue Code sets strict time limits for refunding or transferring credits."

But more tax correspondence is the last thing the IRS wants right now.

Did you notice the IRS' reference in today's statement to its "current paper tax inventory"?

In addition to dealing with the millions of 2021 tax returns that it started processing this week (tax season opened Jan. 24), IRS employees are digging their way out of around 7 million tax year 2020 returns they've yet to process.

That backlog probably contains most of the returns associated with the CP-80 notices.

The tax filings accumulated when the coronavirus hit the United States two years ago and the IRS shut down most of its offices as a way to slow COVID's spread.

But the U.S. Postal Service, true to its delivery motto, kept bringing tax material to the IRS. With few or no employees to handle the mail, the tax material piled up. And up and up.

Congress joined call for notice relief: The tax community coalition (that's the groups' logos and organization names pictured below) was joined by members of Congress, who also wrote this week to the IRS about the COVID-created tax problems.

The bipartisan Capitol Hill effort by both Senators and Representatives called for the IRS to put automated collections on hold until at least July 17, as well as offer penalty relief to taxpayers who paid at least 70 percent of their taxes due for 2020 and 2021.

Some, but not all, taxpayer relief: The IRS also noted in its statement that it is looking at the suggestions that have come in from the tax relief coalition and Capitol Hill, "and we will continue to modify and adjust our efforts going forward to help taxpayers and the tax community."

However, taxpayers, tax professionals, and members of Congress shouldn't expect to get all they want from the IRS. The agency also pointed out in its statement that in some cases, its taxpayer relief hands are tied.

"It is important to appreciate that many IRS notices are statutorily required to be issued within a certain timeframe to be legally valid. This means they must be sent, absent congressional action," according to the IRS.

But the agency also pledged to "continue to explore areas where the IRS can make changes and are in the process of reviewing the full set of notices that we send to determine where we can make adjustments while we continue to work through unprocessed returns and taxpayer correspondence."