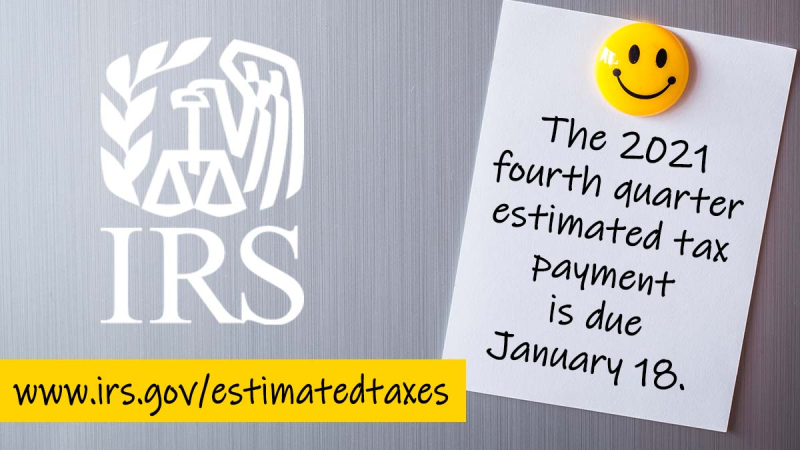 The millions of taxpayers who must make estimated tax payments this month get a few more days to come up with the money.

Since the usual Jan. 15 deadline is Saturday, and the next business day is Monday's MLK Day federal holiday, the fourth estimated deadline for 2021 payments is Tuesday, Jan. 18.

Taxes on self-employment earnings: More than 20 million individuals make these extra tax payments each year. They generally total four, with the payment amounts reflecting earnings that aren't subject to withholding received during four segments of the tax year.

Estimated taxes typically are paid by the self-employed. These taxes basically are their version of withholding that comes out of the paychecks of folks who work for someone else.

The self-employed population has grown during the COVID-19 pandemic. Many previously salaried workers left their salaried jobs, either voluntarily or were laid off due to employers' coronavirus economic troubles.

Some folks made up the income shortfall by going into business themselves, either with a full-time entrepreneurial enterprise or by doing a variety of contracted gig jobs. That employment change means they now face estimated taxes.

Taxes on all unemployment is back: Others who must make these added tax payments throughout the year are those who got prize or certain gambling winnings, investors who sold assets or received income from their holdings, and those who got government benefits when they were unemployed.

And yes, for the 2021 tax year every bit of this out-of-work financial help is taxable. The federal exemption on up to $10,200 of unemployment benefits that was provided for the 2020 tax year was not continued into 2021.

So take note of the full unemployment amount listed in Box 1 of that Form 1099-G you'll get and make sure you have the taxes covered. Don't ignore it. The Internal Revenue Service gets a copy, too.

They're referred to as quarterly, because there are four of them. But they don't really follow the standard calendar quarters.

Instead, the tax deadlines and the earnings periods to which they apply are shown in the table below.

As noted, if the 15th that an estimated tax payment is due falls on a weekend or federal holiday, then it moves to the next business day.

Deadlines also are changed at the discretion of the IRS when taxpayers are affected by catastrophic natural events. That's the case for some who've endured recent major disasters.

You can get a fuller picture of the general rules covering these added payments in my post with the scoop on paying estimated taxes. But here are some highlights.

Equal payments preferred: The IRS prefers that you guesstimate early in the year how much money you expect to make that's subject to estimated tax. Then it likes you to divide that amount by four and make equal estimated tax payments on all four due dates.

You can pay them via a variety of electronic tax options. If you're old fashioned, you can snail mail a paper check or money order, along with the appropriated 1040-ES voucher. The one for the fourth installment due next week is shown below.

If you go the U.S. Postal Service route, as long as your envelope is postmarked Jan. 18 (or the 15th in non-bumped years), the IRS will count you has having timely filed.

Or unequal if you're up for extra work: What if you didn't get unemployment benefits or earn money as a contractor until August, after the first two estimated payments were due? No worries.

You just need to start making your estimated payment on the due date of the appropriate quarter(s) in which you made the money.

In fact, some folks make careful note when they make their 1040-ES money and how much in each tax period. Then they pay estimated taxes only on the actual money they made in those periods, rather than the equally divided guesstimate, even when they get the cash year-round.

This is known as the annualized method. It takes more effort, not only in record keeping, but also whey you file your annual Form 1040. At that time, you'll also have to worth through Form 2210 to detail how much you made in each quarter the tax you paid on it.

So why go to the added hassle? If you have estimated tax earnings only part of the year, or if they fluctuate widely from quarter to quarter, this method gives you better control over your cash flow (and taxes).

If you used the four-equal-payments estimated tax method, you'd pay $2,500 each quarter, even in the third one when you had no money subject to tax and in the first and fourth quarters, where your earnings were less than the 1040-ES equal-payments amount.

By figuring each quarter separately, you'll meet your estimated tax obligations, but only have to pay the actual amount due for each quarter.

Don't ignore or underpay estimated taxes: OK, not worth it, you say. Fine. Stick with four equal installments.

Just be sure to make the payments, regardless of which method you choose.

If you ignore your estimated taxes totally or grossly under estimate what you owe, you could end up owing even more in penalties and interest.

Here's what the IRS says about not making sufficient and timely estimated tax payments.

And note that those added assessments are calculated per estimated tax period because our system is pay as you earn. If you grossly underpaid your first quarter tax amount, that means a lot of penalty and interest accrual.

Finally, if you pay state taxes, it's likely that your state tax department follows the IRS calendar. Double check and if so, don't miss these added state estimated payments either.

So mark Tuesday, Jan. 18 on your calendar and send the IRS (and your state tax collector if applicable) at least some estimated tax money on your non-withheld income.