A review of tax penalties & their inflation-related hikes in 2022 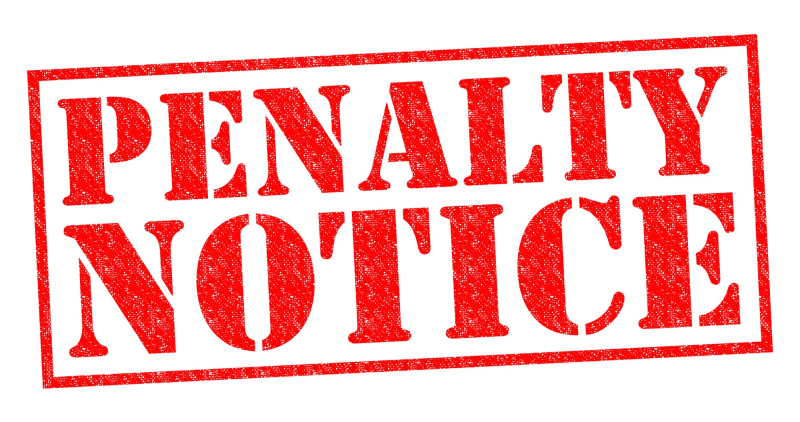 The United States has a voluntary compliance tax system. Uncle Sam trusts all of us to follow the tax laws and file and pay any amounts that are due the U.S. Treasury.

But Uncle Sam is no fool when it comes to taxes. He also has a system of penalties to encourage or, if we refuse, punish us for not fulfilling our tax responsibilities on our own.

The most severe are criminal prosecutions. The Internal Revenue Service also employs civil actions to get taxes due.

Most of us, though, are more familiar with the fines and fees that are assessed when we mess up tax-wise. Those potential added costs usually are pretty effective in stemming questionable tax actions. After all, no one wants to pay Uncle Sam more than absolutely necessary.

That's underscored every year when the IRS announces its overall annual inflation adjustments, which includes penalties. This Part 9 of the ol' blog's 2022 tax inflation series examines some common inflation-adjusted penalties affecting taxpayers, both individual and business, and tax professionals.

Percentage filing and payment penalties: But before we get to those amounts that change due to the cost of living, it's worth a quick refresher on general IRS penalties for filing and paying your taxes late. These are set percentages of unpaid tax that are charged if you don't file or pay on time.

The IRS imposes a failure-to-pay penalty of 0.5 percent for each month or part of a month that tax goes unpaid, up to a total of 25 percent of the remaining amount due.

The penalty for filing late is steeper. The IRS assess it at 5 percent of any tax due that isn't paid as of its filing date, usually April 15. If you file for an extension, the deadline is Oct. 15. The COVID-19 pandemic delayed the annual Tax Day in 2020 and 2021, and some taxpayers were given more time to file then or by the extension deadline due to major disasters.

Regardless of what your tax deadline is, if you don't file a 1040 by then, the late-filing penalty could go up, like the late-payment one, to as much as 25 percent of unpaid taxes.

If you still haven't paid after five months, the failure-to-file penalty will max out, but the failure-to-pay penalty continues until the tax is paid, up to 25 percent. And the maximum total penalty for failing to file and pay on time comes to 47.5 percent of the due tax (22.5 percent for late filing and 25 percent for paying late).

Just for good measure, there's also a minimum late-filing penalty of $435 if you don't get your Form 1040 to the IRS within 60 days of the due date. However, it could be less, depending on your tax bill. The tax code says the penalty for filing two months or more late is the lesser of $435 or 100 percent of the tax due.

Penalty relief, but interest still adds up: Taxpayers who have a history of filing and paying on time, but have run into a late tax situation for the first time might be able to have late filing and payment penalties abated.

This special treatment is for taxpayers who haven't been assessed penalties for the past three years and who meet other requirements. You can find more on penalty relief at the IRS' First-Time Penalty Abatement web page.

Also note that in light of the coronavirus pandemic, the IRS is offering a tax help to those facing COVID-19 money troubles.

And regardless of the IRS penalty amounts, interest also accrues on unpaid taxes. The interest rate for individual taxpayers is the federal short-term rate plus 3 percent and is adjusted quarterly. For the fourth quarter of 2021 that began Oct. 1, it's been 3 percent.

The IRS can remove or reduce penalties for reasonable cause, but interest charges just keep accumulating.

No tax due, no penalties: The only folks who don't have to worry about meeting the IRS timetable, at least as far as penalties, are those who don't owe. Since the penalties are based on taxes due, any percentage of zero is zero.

But as the recent COVID-19 relief payments and Advance Child Tax Credit distributions have shown, it's a good idea to file so the IRS has your up-to-date information. And, of course, you need to file to get any refund you're due.

Finally, even though overall inflation went up and, as noted in the earlier parts of the ol' blog's inflation series, some tax amounts were bumped up, the $435 late-filing penalty stays at that level for the 2022 tax year.

That nod to inflation, or lack thereof in the case of late return filings, brings us to the rest of this penultimate post of the 2022 tax inflation series, a pondering of other penalties.

Business late-filing fees: The IRS deals with more returns from individual taxpayers than from business filers. But as with individuals, the tax agency also whacks companies with filing related late fees.

Information return penalties: The IRS also assesses inflation-affected penalties on businesses that do not file correct information returns and/or do not furnish correct payee statements. This includes the filing of, among others, Forms 1098, 1099, and W-2.

The penalty amounts are determined by average annual gross receipts for the last three years and detailed in IRS Rev. Proc. 2021-45. Just search for "information returns."

The 2022 tax-year inflation adjusted amounts for returns to be filed in 2023, both per violation and maximum that can be assessed, are:

Those tax preparer potential penalties for 2022 are slightly more than the 2021 amounts, which are $50 instead of $55 for the first five penalty cases; $27,000 instead of $28,000 when it comes to those maximum penalties; and $545 instead of $560 for taxpayer check and tax eligibility diligence instances.

The Fixing America's Surface Transportation Act, or FAST Act, that became law in December 2015 included a provision that authorizes the State Department to a revoke, deny or limit passports for anyone the IRS certifies as having a seriously delinquent tax debt.

As noted in the inflation series post on international taxes, the amount of a serious delinquent tax debt that could get your passport pulled in 2022 is $55,000. The passport-related debt amount is $54,000 or more for 2021.

The end of inflation, or at least the series: Well, that's it for Part 9 of this year's version of the ol' blog's annual 10-part tax-related inflation series.

The final post of 2022 tax-related inflation adjustments will focus on optional standard mileage rages. But it likely will be a couple of more weeks before we get those numbers. The IRS typically issues its annual revisions to the per-mile rates you can claim closer to the end of the year or early in the next tax year.

Whenever those per-mile amounts are released, I'll let you know in the pending-for-now Part 10 post. In the meantime, you can review last year's post, which has the 2021 mileage rates that are still in effect until Dec. 31.

You also can check out all the posted-so-far 2022 inflation entries by clicking on the link to Part 1 of the series in the below box. That initial post has a complete inflation series directory at the end of the item.

This post on 2022 tax penalty amounts is Part 9
of the ol' blog's annual series on tax inflation adjustments.
The 10-part series started with a look at next year's income tax brackets and rates.
That first item also has a directory, at the end of the post,
of all of next year's tax-related inflation updates.
If, after perusing this penalties post, you want to check out other inflation adjustments
for next year, you'll find the links, when posted, there.
Note: The 2022 figures in this post apply to that tax year's returns to be filed in 2023.
For comparison purposes, you'll also find 2021 amounts that apply to this year's taxes that,
pending any COVID-19 Tax Day delays like we've faced the last couple of years, will be due April 15, 2022.