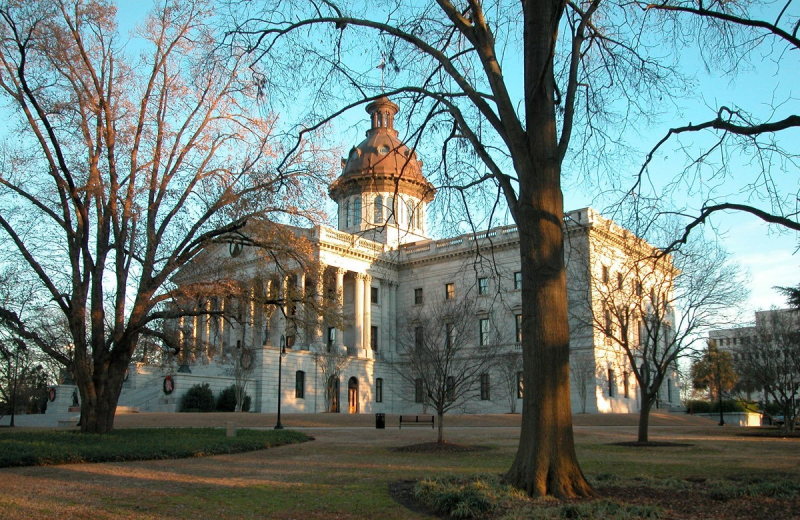 The South Carolina statehouse in Columbia soon could be the site of a legislative effort to cut the state's individual tax rates and end business taxes.

A South Carolina lawmaker wants to cut the state's individual tax rate in half and eliminate taxes on businesses.

Some Palmetto State residents see the proposal as a potential post-Christmas present. Others, however, are worried about how the state will pay for projects.

Spartanburg State Sen. Josh Kimbrell has been working of the bill since the summer and officially filed it this month. His plan would cut South Carolina's top income tax rate from 7 percent to 3.5 percent.

As for businesses, Kimbrell want to end the corporate income tax, which is a flat 5 percent currently applied to C-type entities. Pass-through companies, which are taxed as part of the owner's individual tax filing, would get an income tax exemption. The goal, he said in earlier discussions of his plan, is "to eliminate income taxes on business entities for income derived from business activities."

However, the South Carolina Department of Commerce says the state's corporate rate matches up just fine.

"At 5%, South Carolina's Corporate Income Tax Rate is among the lowest in the Southeast," according to the state commerce department website.

S.C. Commerce officials also note that the state uses a single factor sales formula for apportioning income, and that many companies qualify for a job tax credit, which eliminates up to 50 percent of a company's corporate income tax liability for a specified number of years.

Sales tax would stay and pay: As for the revenue lost by slashing some and eliminating other income taxes, Kimbrell says that money can be made up by closing what he describes as loopholes in the state sales tax.

"Right now, we have so many special interest loopholes and exemptions that if we just close those, not only do we pay for the tax cut I'm proposing for businesses and families, but we actually probably make money for the state of South Carolina," Kimbrell said.

It will be fascinating to see if South Carolina and other states considering ending income taxes will succeed. Tax debates at any government level make for some exciting debates.

If South Carolina does end its corporate tax, it also will be interesting to see if the change really does affect the state's appeal to companies.

"While there are many ways to show how much is collected in taxes by state governments, the Index is designed to show how well states structure their tax systems and provides a road map for improvement," say Jared Walczak, the nonprofit's Vice President of State Projects, and policy analyst Janelle Cammenga, who worked on the latest comparisons.

In the new report, which is based on tax systems as of July 1, 2021, the beginning of Fiscal Year 2022, South Carolina comes in overall at 31 of 50. Just to be clear, the higher the ranking, the better.

Its corporate tax rate is fifth, so the S.C. Department of Commerce looks to be on the money there. But the Palmetto State's individual income tax rate is 33rd, and its sales tax rate ranking is 31st.

Looking at South Carolina's eastern seaboard neighbors that fare well in the Tax Foundation's 2020 index, Florida is 4th and North Carolina is 11th. Then there's a big drop to 25, which is where Virginia is ranked. South Carolina, as noted, comes in at 31, with Georgia right behind at 32nd.

All 50 (+D.C.) business tax rankings: As for the rest of the United States, Walczak and Cammenga note that the absence of a major tax is a common factor among many of the top 10 states.

Those best business climate leaders are:

At the other end of the scale are:

And here's how the states stack up visually, thanks to the Tax Foundation's map: 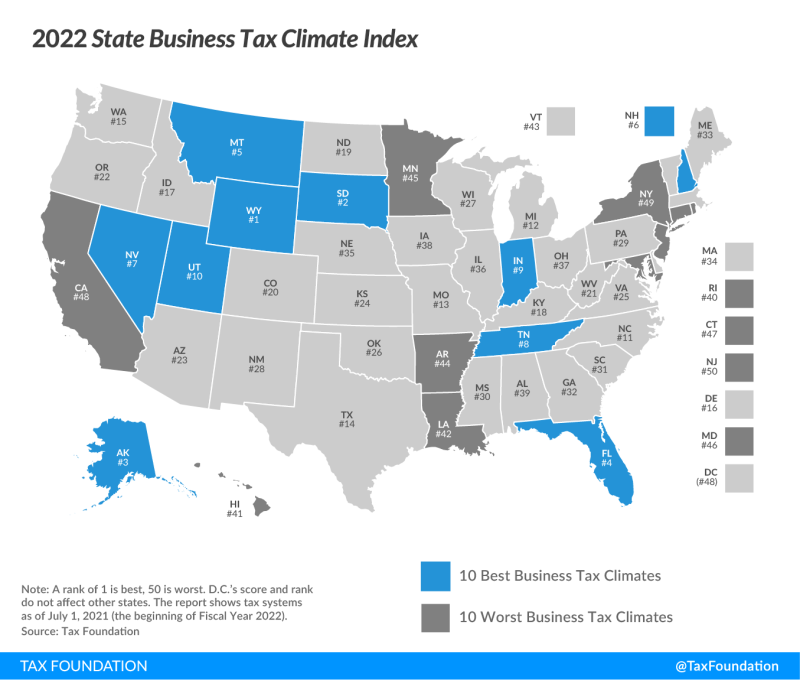 Check out the report to see where your state stands, and for more on what and how much of a role various state taxes played in the 2022 rankings