Tax credit for other dependents can help families with older kids, aging parents 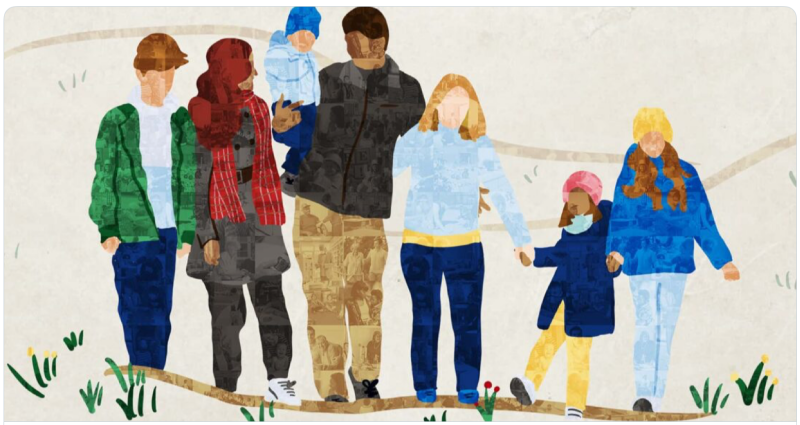 A tax credit for dependents offers a break for older children, extended family members, and even non-relatives.

The family-friendly tax break that's been getting most attention of late is the Child Tax Credit (CTC) and the advance payments for 2021 that are going out through December. I'm guilty, as a perusal of the ol' blog quickly shows.

But some families aren't eligible for the CTC, either the money being distributed now or when they file their annual tax returns next year.

But there's still some tax relief hope for these folks. They might be able to claim the Credit for Other Dependents.

Direct tax debt reduction: This $500 tax credit was created as part of 2017's Tax Cuts and Jobs Act (TJCA). It's sometimes referred to as the Family Tax Credit or, thanks to tax wits, Non-Child Tax Credit.

And of course, the Credit for Other Dependents also has an official Internal Revenue Service acronym. But since COD already is used for cash or collect on delivery (which could apply to IRS operations, too, but I digress), the tax agency has flipped the wording for the abbreviation. It's called ODC for other dependent credit.

But whatever name you use, since it's a tax credit, it could reduce any tax you owe dollar-for-dollar.

Depending on what you owe, the Credit for Other Dependents could knock your tax bill down to zero. It is, though, nonrefundable, meaning that if you have more of the credit than a tax liability, you won't get the excess back as a refund.

But I don't know anyone who'll argue with being able to not owe Uncle Sam a dime.

Like all individual tax provisions of the TCJA, the Credit for Other Dependents, or ODC, is in the Internal Revenue Code through the 2025 tax year unless federal lawmakers decide to extend it.

However, that's still a few years down the road. Let's look at how it works now.

Qualifying dependents: To claim the Credit for Other Dependents, you and your family members must meet certain conditions. These include:

Note that last group of potential tax dependents, the adults you can claim in connection with the Credit for Other Dependents.

Adult dependents for many folks will be actual relatives, such as elderly parents who rely on you for financial as well as emotional support. However, it's not limited to formal family members.

1. He or she is not your qualifying child.
A child cannot be your qualifying relative for other dependent purposes if the child meets the dependent child requirements for the Child Tax Credit (CTC). Those are detailed in my post on the 5 tests a child must meet to be your tax dependent.

For most families, that's not an issue since when it's available, they'll want to claim the substantially larger and refundable CTC for qualifying children. Refundable means just what is says. You get money back as a refund if there is some of the credit left after offsetting any due taxes. 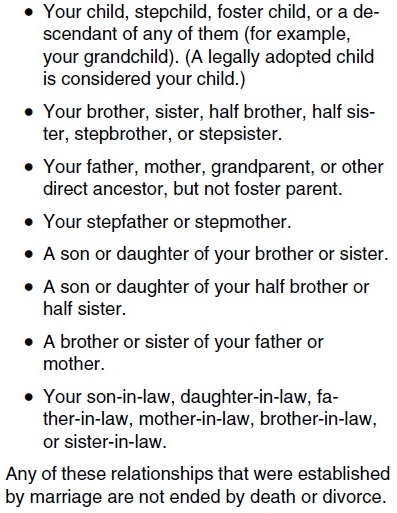 Let's look first at the with the relationship test since the IRS spells out who qualifies here. It is a person or any age who is related to you in a variety of ways noted in the box to the left.

If, however, the person is not an actual relative, he or she could qualify as one for tax purposes if she or he lived with you for the whole year. Yes, all 365 days (or 366 in a Leap Year).

And yes, that means you might be able to claim that lay-about boyfriend that you still haven't broken up with. (Non-tax piece of advice: Consider making this the year that you send him packing.)

So that deadbeat boyfriend (yes, I'm still picking on him; you deserve better!) who can't even hold a temp job clears this hurdle.

If you're dealing with a fiercely independent older parent (been there) who refuses to accept your financial help, you can use this tax break — without mentioning its relatively small amount — in your argument to convince them to let you help.

Other financial considerations: As with most tax breaks, there are some other matters that come into play. The most common one is the taxpayer's income.

The Credit for Other Dependents begins to phase out when your income, as a single taxpayer, is more than $200,000.

But if you and your other dependents do qualify, be sure to claim this credit. As I noted, although it's not that much in the grand tax scheme, every tax break helps.

IRS Form 14815 also lists the documents you'll need to claim either the CTC or ODC.

Finally, as I noted in yesterday's post on how families are spending their advance CTC payments, all my posts this Thanksgiving/National Family Week will look at family-related tax matters. If you need a break from yours (no judging; been there, too!), pop on over and check them out.

This is really a great article I really like and will definitely share it widely with my friends, wish you always have good health and make more articles in the future. thank you