As we wind down the first weekend in October, Democrats are continuing to fight amongst themselves and with Republicans over how big President Joe Biden's economic plan should be and how to pay for however much it ultimately is.

But one group of taxpayers is happy about what isn't in the mix. Potential changes to the tax treatment of inherited property are off the table, at least for now.

There had been talk that the stepped-up basis rule would be eliminated. This tax rule allows heirs to set the value of property they receive at its market value on the day the prior owned died.

When property's value is, as the name indicates, stepped up from that of its original owner, the basis is greater for the heir. That in turn reduces any subsequent taxes new owners might owe if they ultimately decide to sell the bequest.

Family farm tax facts: Stepped-up basis has been a particular focus of families that own farmland. The long-standing argument has been that any changes to how inheritances are valued for potential estate tax purposes could bankrupt them.

It's been a successful emotional argument. Although the United States is far removed from its agrarian days of yore, and private farms are increasingly being bought by giant commercial agriculture conglomerates, we still romanticize the family farm. 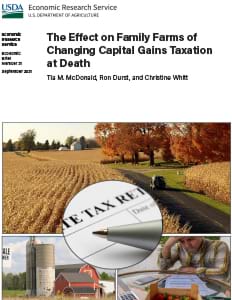 But from a factual tax standpoint, the argument doesn't hold up. And that's not just a political opinion. It's supported by a recent analysis from the U.S. Department of Agriculture's Economic Research Service, or in government acronymese, the USDA ERS.

In its September report "The Effect on Family Farms of Changing Capital Gains Taxation at Death," USDA ERS analysts examined Biden's proposed changes to the capital gains tax treatment of inherited assets, specifically in relation to the family farms in the study's title.

Few farms face taxes upon owners' deaths: Researchers estimate that of the 1.97 million family farms in the United States, based on the USDA's 2019 Agriculture Resource Management Survey (ARMS), there would be 32,174 estates that would pass to heirs due to principal operator deaths.

But of those farm estates, the USDA ERS model suggests that the Biden plan would mean only 1.1&nbsp;percent would owe a capital gains tax at death.

Another 18.2&nbsp;percent would owe no tax at death, but could potentially have a deferred tax on farm gains as long as the inheriting family member continued to operate the farm.

Finally, 80.7&nbsp;percent of the farm estates wouldn't owe any tax at death, while also receiving stepped-up basis on all assets.

Current and proposed estate tax rules: Remember, federal estate taxes only come into play when an estate's value exceeds a certain amount, which is adjusted annually for inflation.

The Republican tax reform bill enacted at the end of 2017, the Tax Cuts and Jobs Act, greatly increased the estate exemption amounts. For 2021, that tax-free value is up to $11.7 million per person.

Also note the per person designation. That means a 2021 tax year estate tax exemption amount of $23.4 million for a married couple.

It's only when an estate exceeds those tax year amounts that the federal estate tax, which can go as high as 40&nbsp;percent, is assessed on the overage.

Other family farm (and more) safeguards: And the 46th president's proposal also includes an exemption for family-owned business assets, including farms, inherited by a family member who continues operating the business.

The USDA ERS report acknowledges that while Biden's proposed changes to inheritances' stepped-up value "could possibly impact the intergenerational continuity of family farms," the family-run carve out would prevent most from facing estate taxes, at least immediately upon inheriting the property.

Of course, if your family's farm is in the 1.1&nbsp;percent that would owe Uncle Sam estate taxes under the president's plan, the news is not good.

But 1.1&nbsp;percent is far from the terrifying image of the evil tax collector swooping down and taking control of every family farm in the United States because of the death tax, which is what estate tax opponents call the levy.

That's why 1.1 percent is this week's By the Numbers figure.

And for now, any estate tax changes are far down the legislative road.