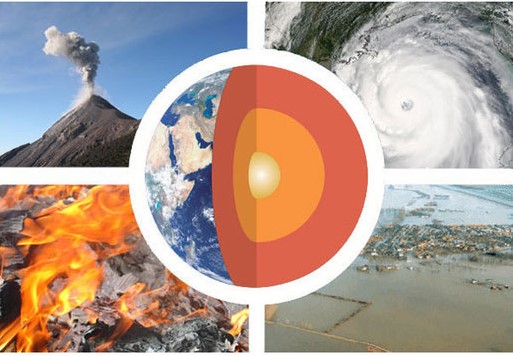 This has been a wonderful weather week here in the Austin area. Nights have been cool. Days have topped out in the seasonal upper 70s.

But today is a tad warmer, a trend expected to continue through October. So it's goodbye to our brief autumn in Central Texas, and back to closing windows and cranking up the air conditioner.

Don't get me wrong. I'm not complaining. Although it was hot this summer, it wasn't the hottest since we moved here 16 years ago. And after February's devastating ice storm, I'm never complaining about warm or warmer than normal or hot weather again.

Besides, the hubby and I and our Lone Star State neighbors are just part of the meteorological misery loves company club, which grew much larger in 2021.

More disastrous weather everywhere: Weather and climate disasters so far this year have claimed 500 lives and cost more than $100 billion in the United States alone, according to a recently released report by the National Oceanic and Atmospheric Administration's (NOAA) National Centers for Environmental Information.

The country was hit by 18 disasters in the first nine months of the year.

The cost in lives is incalculable. The cost to property so far is more than $100 billion, per the NOAA data, with six weeks left in the official Atlantic hurricane season.

Plus, says the report, 2021 is the seventh consecutive year the United States has had more than 10 disasters totaling more than a billion dollars. That's not an encouraging trend.

Disasters and taxes: So why, you ask, am I fixating on weather and disasters? Long-time readers know I'm a weather nut, specifically one obsessed with the worst of Mother Nature.

Plus, there are tax components to disasters, from deductions for storm-related losses on returns to changes in deadlines for filing those claims.

Folks in nine states are dealing with those possible claims and different tax due dates right now due to fires and floods and tornadoes and hurricanes.

Disaster scams added costs: But disasters also can have deleterious tax effects on those not in their immediate paths.

I'm talking about scammers. Particularly the low-lives who use other's tragedies to try to con money and personal information from the more generous.

Every time there is a catastrophe, these crooks crank up the cons. Scammers have always known that generous individuals are easy marks.

That's why they regularly set up fake websites to take advantage of public generosity, especially in the wake of tragedies and disasters.

The COVID-19 pandemic also has created yet another crooked avenue for scammers, with some seeking donations to fake organizations to help families struggling due to coronavirus deaths and job losses.

Fake tax advices, too: The calling crooks often tell their marks that their donations not only will help those in need, but also give them a tax deduction.

Wrong on both counts.

The money is going into the criminals' pockets. And since the charities are real or IRS-approved, the donor cannot claim the contribution as a tax deduction.

My post on a dozen disaster scam warnings has what to look out for when you get a call from an apparent charity that's ostensibly created to help disaster victims. Fake charities also once again made the IRS' annual Dirty Dozen tax scams list for 2021.

Charity scams have gone global: While the United States has been hit with its share of disasters and related scams this year, it's far from alone.

After Haiti was rocked by a 7.2 earthquake in August, some crooks immediately began ringing up potential American marks.

And similar scam calls pegged to disasters, as well as the ones just trying to rip off the generally good-hearted, crop up in places beyond the U.S. of A.

That's why this week, the IRS has joined international organizations and other regulators in highlighting Charity Fraud Awareness Week.

The campaign is operated by a partnership of charities, regulators, law enforcers, and other not-for-profit stakeholders from across the world. The purpose of the week, which kicked off this year on Monday, Oct. 18, and runs through Friday, Oct. 22, is to raise awareness of fraud and cybercrime affecting organizations, as well as create a safe space for charities and their supporters to talk about fraud and share good practices to fight it.

And global charity scams are increasing: Such interactions are necessary because global cybercrime is on the rise, again exacerbated by the widespread and persistent coronavirus pandemic, notes the United Kingdom-based Fraud Advisory Panel, which is leading this year's effort.

The criminal activity includes not only attacks on charitable donors and beneficiaries, but also on the nonprofits themselves. The Fraud Advisory Panel estimates the average charitable organization will lose 5 percent of its revenue to fraud each year.

Those dollar and emotional costs are why the IRS is participating in the global focus this week on fighting charity fraud.

"We especially advise taxpayers to be on the lookout for scammers who set up fake organizations to take advantage of the public's generosity," said IRS Director of Exempt Organizations and Government Entities Rob Malone. "They take advantage of tragedies and disasters, such as the COVID-19 pandemic. Campaigns like Charity Fraud Awareness Week can help remind everyone to remain vigilant."

You can find more on the event, how you can get involved, and how you can protect yourself at the Fraud Advisory Panel's website, and at the separate Charity Fraud online page. You also can regularly check the IRS' tax scams and consumer resources site, as well as, of course, keep reading the ol' blog for scam updates and alerts.