NFL's 2021 season kicks off official gambling partnerships along with games 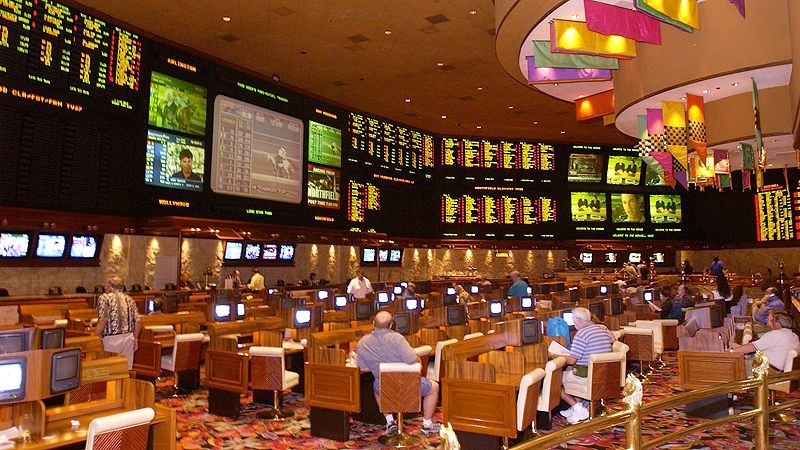 Sports betting has expanded beyond casino sportsbooks like this one in Las Vegas. And this NFL season, the league has made deals with seven sports betting companies. (Photo by Kay Bell)

The National Football League's 2021 season kicks off tonight with the Dallas Cowboys visiting the defending Super Bowl champion Tampa Bay Buccaneers. Are you ready for some sports betting, this time OK'ed by the NFL?

The NFL reached deals last month with FOX Bet, BetMGM, PointsBet, and WynnBET to be the league's Approved Sportsbook Operators. This means that, among other things, the four legal betting operations can purchase televised game commercials and advertise on other select NFL media.

The sportsbook deals are just the latest acknowledgment by the NFL that its fans bet on the games. Back in April, the NFL came to terms with Caesars Entertainment, DraftKings, and FanDuel to be the league's Official Sports Betting Partners.

Why the NFL's shift from protecting the game's integrity by keeping its distance from betting, to getting cozy with sportsbooks?

Money, of course. The same reason the league relented when it joined the NHL in putting a franchise, the relocated Raiders in pro football's case, in Sin City.

In the pre-COVID 2019-20 season, the NFL had around 1,850 partnerships. The deals for the league and its 32 teams exceeded $1.47 billion that year, according to global sponsorship consultant IEG.

So it's no surprise that the NFL, the most popular and profitable U.S. league, wanted to expand its business deals even further. What is surprising is that it took three years after the U.S. Supreme Court declared sports betting was legal across the United States.

As the 2021 NFL season kicks off, legal sports wagers will be accepted in 26 of the 32 states and Washington, D.C., where sports betting is legal. Five additional states likely to offer legal sports betting by the end of the season, according to the American Gaming Association (AGA).

And NFL fans won't have to go far to place their bets. Sixteen of the 23 states that are home to NFL teams have legalized sports betting.

More fan interest in betting: New research from the AGA shows that a record 45.2 million Americans (or 18 percent of the country) plan to bet on NFL games this season. That's a 36 percent increase from last season.

The growth of NFL (and no doubt other sports) betting can be attributed to a couple of things.

First, there are more legal sports betting operations. The AGA notes that eight more states this year offer sportsbooks than did in 2020.

Second, online betting is even more popular. While NFL betting is projected to be up across all wagering methods, betting with online sportsbooks is expected to see the largest increase over 2020, according to the AGA.

The AGA survey conducted last month by Morning Consult found that 19.5 million will place a bet online, both legally and illegally. That's up 73 percent from 2020.

A few more sports betting numbers: In addition to the increased interest in sports betting, the AGA's research also provides a plethora of other betting data.

Even if NFL fans don't place an official bet at a sportsbook, more of them — 21.7 million American adults — will bet on the 2021 NFL season casually with friends. That a 31-percent increase from 2020.

Most of those bettors likely will be in the northeast. Fans in that section of the county are the most interested (21 percent) in betting on the NFL this year.

NFL fans in the west (18 percent) and Midwest (17 percent) are close behind. Southerners show the least (15 percent) NFL betting interest.

Fantasy football also remains popular. AGA says 14.6 million will participate in a paid fantasy contest or other type of pool competition, up 69 percent from 2020.

IRS wins, too: The NFL obviously will pocket a lot of betting-related dough this year. The Internal Revenue Service also should be a winner.

When bets are made at legal betting operations, the IRS will learn about more of the winnings that meet taxable reporting thresholds. I know I blogged about the federal gambling tax rules not too long ago, but here are some highlights.

When winnings hit a certain level, the gambling establishment where you won will withhold taxes, at a 24 percent rate, and report the amount to you and the IRS the next year on Form W-2G.

That's the case when if you win:

Note too, that even if your winnings are substantially less and you don't get any official tax documentation, all those winnings are taxable income that you legally are required to include on your tax return.

Don't push your luck. The IRS might be short-staffed and those agents overworked right now, but do you really want to take a chance with the tax man?

Despite the AGA survey finding that, among expected bettors, the Kansas City Chiefs are the most popular pick to win next year's Super Bowl LVI at 15 percent, followed by the Buccaneers at 11 percent, then the Cowboys at 7 percent, don't bet on the Dallas team. To win tonight or to end up in the next NFL championship game.

It breaks my life-long 'Boys fan heart to say that, but I'm also a realist. After a great run in the mid-1990s, my team has been perpetually underachieving for decades.

I'll be watching tonight and the rest of the season and cheering. OK, mostly cursing.

But unless the Cowboys really surprise me, the most the team is likely to offer is some losses to offset other gambling winnings.

UPDATE, Friday, Sept. 10, 2021, and shameless plugging of my tumblr blog Tumbling Taxes. Over there you'll find a football post with a video with clips from five football movies that are more entertaining, if you're a Cowboy fan like me, than the high(low)lights from last night's game.