Most Americans OK with higher taxes for the rich

Congress currently is debating who to tax and how much to pay for the Biden Administration's Build Back Better plan. The public, however, seems to have decided.

A recent Pew Research Center poll found that a majority of Americans are for raising taxes on households that make more than $400,000 a year.

Overall, the survey says that 61 percent of respondents approve of raising ordinary income tax rates on their wealthier neighbors.

The current top rate is 37 percent, which was lowered from 39.6 percent with the enactment in late 2017 of the GOP-written Tax Cuts and Jobs Act (TCJA). Democrats want to return to the pre-TCJA higher rate.

In the Pew survey, most respondents, 35 percent, say any tax increases should be relatively modest. Another 26 percent say increasing tax rates on households with annual income of more than 400 grand is the way to go.

About a quarter, 24 percent, say tax rates on higher-income households should be kept the same as they are now.

Just 13 percent told Pew pollsters that these rates should be lowered. 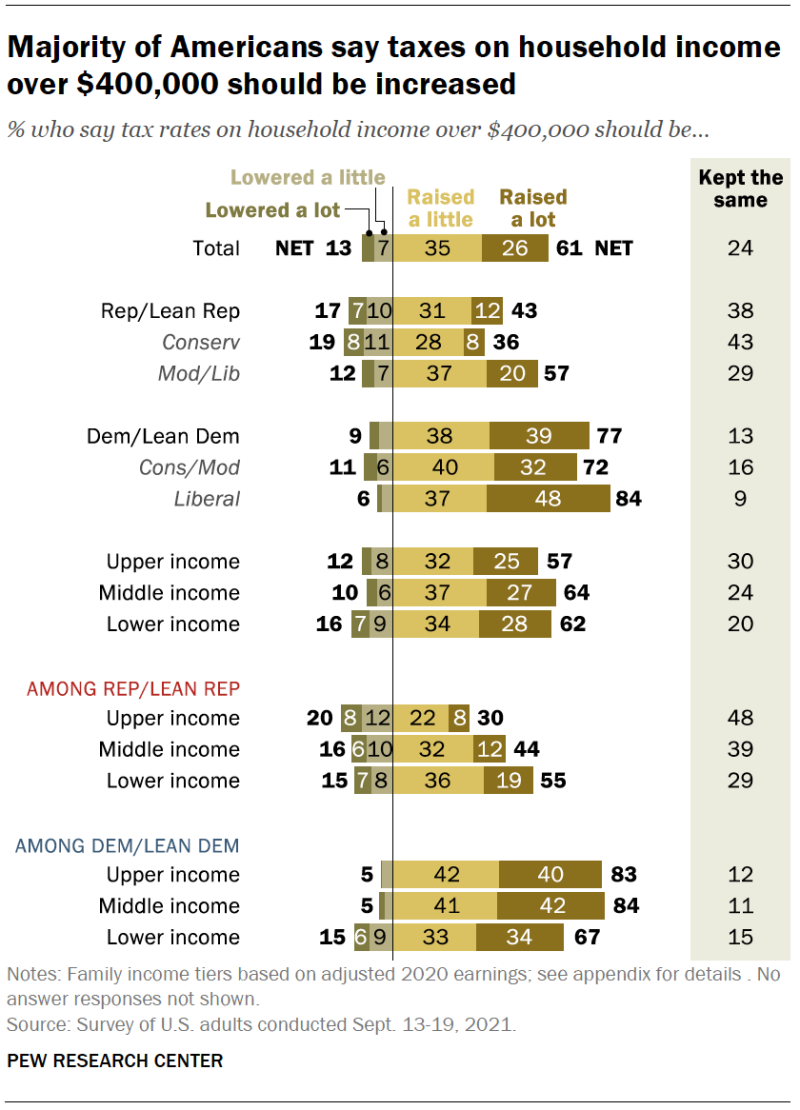 Pew Research found that Democrats are largely in favor of raising taxes on household income over $400,000. The total tally was 77 percent for the hikes, with 39 percent saying the taxes should be increased a lot.

Only 9 percent of Democrats said the tax rates should be lowered on higher earners. Another 13 percent opted for keeping the current rates in effect.

Within the Democratic party, there's a bit of a divide. Liberals are more likely than their conservative and moderate counterparts to favor the tax hikes, by an 84 percent to 72 percent margin.

On the Republican side of the aisle, the results were a bit surprising. Many in the party that's long been known for its staunch tax reduction position are OK with taxing higher earners.

Forty-three percent of those identifying with the GOP told Pew Research that they agreed that tax rates on household income of more than $400,000 should be increased. And a clear majority, 57 percent, of those who consider themselves moderate and liberal Republicans said the targeted tax rates should be increased at least a little.

Only 38 percent of moderate-to-liberal GOP members said the current rates should stay in place. And about two-in-ten, or 17 percent, said that tax rates on the higher-income households should be lowered.

The results were more as expected among conservative Republicans. Around 40 percent of the conservative GOP wing said current tax rates should remain in place.

But still, 36 percent who self-identified as conservative GOP members agreed that the top rate should be bumped up at least a bit.

Income levels offers different views: While the Pew survey found overall that there is support for increasing taxes on higher earners, it also discovered some interesting, and substantial, differences in points of view depending on respondents' incomes, regardless of political affiliation.

Republicans with lower incomes were more likely than middle- or high-income Republicans to say tax rates on household income over $400,000 should be raised.

However, lower-income Democrats were the least likely to say that tax rates on household income over $400,000 should be increased.

So are lower-earning Dems more aspirational than their GOP economic peers? Do they want to keep lower top tax rates in place so they'll benefit when they reach that desired upper income level?

Or have Republicans with smaller bank accounts become disenchanted with their party's tax law changes that have provided more benefits for its richer members?

However, you can check out all of Pew's parsing of its tax hike questions, including views on raising tax rates of large corporations — spoiler, most are for it — and what we think about the U.S. economy and the Biden Administration's efforts to improve it, at the nonpartisan think tank's website.

Distilled message of this article: Most Americans OK with...Don’t tax you. Don’t tax me. Tax the guy behind the tree.