Some states tax at least some food items 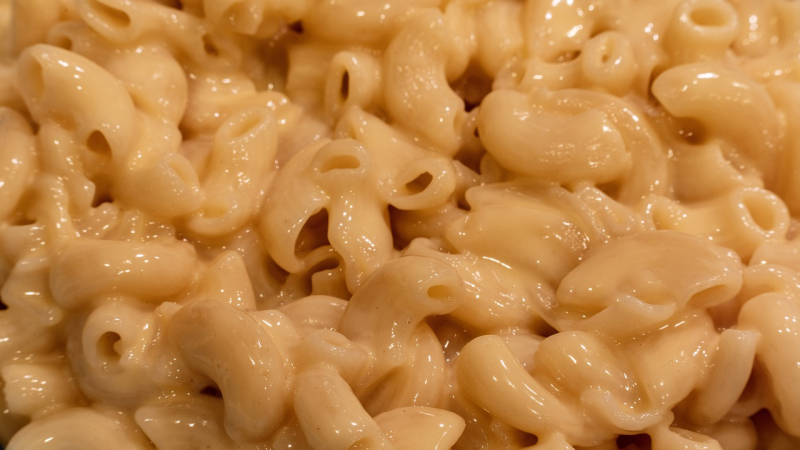 Image by Hucklebarry from Pixabay

When the hubby and I started out our life together, we were young and poor. Like watching every cent poor. That included our food budget.

All those decades ago, our regular Monday night meal was macaroni and cheese.

In the budget-conscious beginning, it was store brand boxed mac and cheese mix. As our earnings increased, we upgraded to brand name boxes. We knew were doing OK when Monday Meal morphed into the frozen version.

We still have Monday Meal, but not exclusively on the first weekday. But it's still a quick dinner that we supplement with fresh veggie sides and, if I'm feeling energetic, homemade cornbread. We are not, however, buying mac and cheese flavored ice cream as this, or any, meal's dessert!

Food troubles, tax break help: I realize how fortunate we are to eat what we want — cooked ourselves, microwaved, or carry-out/delivery — when we want. Lots of people are where we were decades ago, and they are having trouble upgrading their eats.

The COVID-19 pandemic worsened the food issues, as families lost one or all of their literal breadwinners to coronavirus workplace closures. The one tiny, thin silver lining is that COVID relief payments are helping.

The percentage of American families with kids who report not having enough to eat fell dramatically after the first child tax credit payments were distributed last month, writes Helena Bottemiller Evich in a recent Politico article.

She cites U.S. Census findings that a drop last month in food insufficiency, which generally is described as sometimes or often not having enough to eat, was reported mostly by households with children after they got the first of the Advance Child Tax Credit (AdvCTC) payments.

That extra cash — $300 for each qualifying child age 5 or younger, $250 for youngsters ages 6 to 17 — apparently made a big difference at the grocery store.

No tax means some shopping savings: Another thing that helps shoppers is the no-sales-tax status in most states of food. It might not seem like much to most of us, but when every penny literally counts, it makes a difference.

The good news is that most of the 45 states that have state sales taxes don't tax food. (Quick note, while Alaska joins Delaware, Montana, New Hampshire, and Oregon in not levying a state sales tax, it allows local governments to assess them. However, Alaska exempts food statewide from any sales tax.)

Seven states are at the other end of the sales tax collection scale.

However, notes the FTA, five of the full food-taxing states offer lower-income households a rebate or income tax credit to offset the tax. They are Hawaii, Idaho, Kansas, Oklahoma, and South Dakota.

In between are, well, in between food taxers. Again, thanks to the FTA for its research that shows several states tax food at rates lower than their general sales tax. They are:

Food tax debates continue: The debate over whether to tax food is not new.

A Center on Budget and Policy Priorities (CBPP) asked in a 1998 paper Should States Tax Food? The progressive Washington, D.C.-based think tank's conclusion:

State tax systems typically have two major shortcomings. First, they place an unnecessarily heavy tax burden on low- and moderate-income households. Second, in many states the revenue they generate does not grow at an adequate pace without periodic increases in tax rates. These shortcomings are exacerbated in states that levy their sales taxes on the purchase of grocery food because food consumption as a percentage of income is particularly high among the poor and because food purchases in the economy as a whole are declining as a share of total consumer spending.

More than two decades later, the argument continues. In an April 2020 report, the CBPP says States That Still Impose Sales Taxes on Groceries Should Consider Reducing or Eliminating Them.

Certain edible items are deemed taxable by states. This generally is so-called bad food, such as candy and sugar-sweetened beverages.

The Tax Foundation's colorful map below shows the many variations among states on how to tax groceries, candy and sodas. 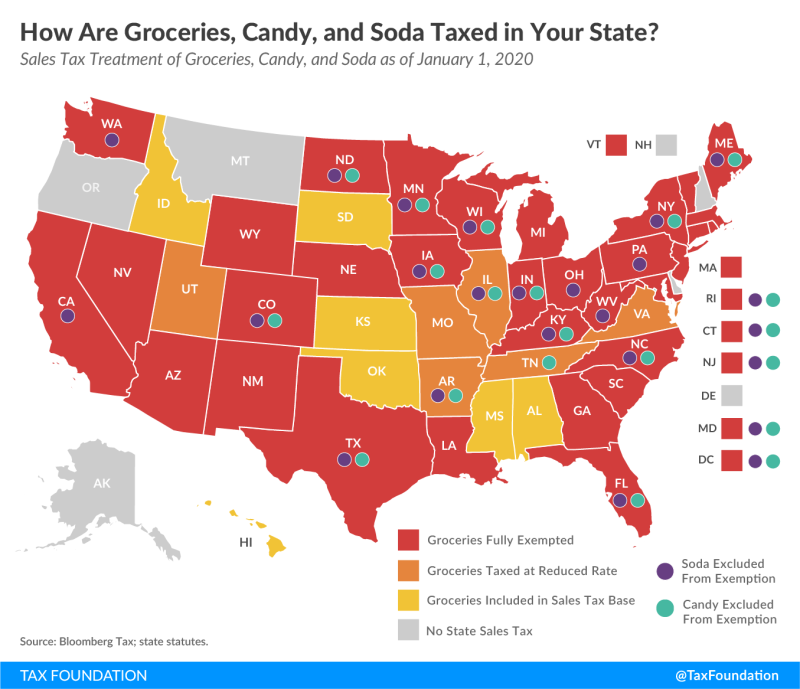 Prepared meals at restaurants, and in many cases even those sold at grocery stores, typically are taxed at states' full sales tax rates.