One thing missing from how to pay for the $1 trillion infrastructure bill finally being debated on Capitol Hill is an increase in the federal gas tax.

This fuel excise tax originated during the Great Depression as a temporary added penny to each gallon of gasoline. Back then, 1932 to be precise, a gallon of gas cost 18 cents; that's around $2.90 in today's dollars, which is just a few cents more than what I paid this week to fill up my Chevy.

Some lawmakers periodically call for an increase in this tax, which goes to the Highway Trust Fund to help pay for the United States' highways and mass transit programs. But since this tax has been stuck at 18.4 cents per gallon (cpg) since 1993, Congress has increasingly relied on other revenue sources to pay for roads and other infrastructure.

President Joe Biden made it clear to the Democratic and Republican negotiators of the $1 trillion bill now before the Senate that he didn't like the gas tax provision in the bill's first draft. It would have allowed the federal gasoline tax to increase at the current inflation rate to pay for many of the proposal's projects.

So Congress is looking at other funding options, like increased cryptocurrency transaction reporting to the Internal Revenue Service.

They, too, are opposed, usually by drivers of fossil-fueled vehicles and general anti-tax groups, but state lawmakers tend to be more successful in getting the fuel-pegged payouts.

Missouri is the latest state to face down gas tax opponents.

On July 13, the Show Me State's Republican Gov. Mike Parson signed Missouri's first fuel tax hike since 1996. The state legislature approved the incremental increase, with the current 17 cent per gallon rate going up gradually over five years until it tops out at 29.5 cents.

Missouri drivers will see the first increase when it takes effect on Aug. 28.

Failed fuel tax increase effort: Opponents of the gas tax hike had tried to halt this month's increase by collecting enough signatures to have to go to a public vote next year. Americans for Prosperity (AFP), a politically conservative lobbying group, began soliciting signatures in May.

If the petition drive had succeeded, the increase would have been put on hold until the vote. That delay, however, won't happen.

"We were unable to get all the pieces to come together," said AFP Executive Director Jeremy Cady. Instead, Cady said his group and others who opposed the tax increase would look at potential legislative changes that would help offset the higher gas levy.

That might be difficult, too. Supporters of the Missouri gas tax increase point out that the state has the seventh largest highway system in the country, but before the law change, its gas tax was the second lowest in the United States. Only Alaska's gas tax is lower.

At the signing ceremony, Parson called in the increased gas tax "a big win for the state, and really, for the future of our state." The new levy is expected to generate $460 million a year to help pay for Missouri's roads and bridges.

Gas taxes nationwide: Wonder how your state compares as far as fuel taxes? The Tax Foundation has answers.

The nonprofit Washington, D.C.-based tax policy group created a map, shown below, with information on each state's gas tax rates as of July 2021, based on recently released American Petroleum Institute data. 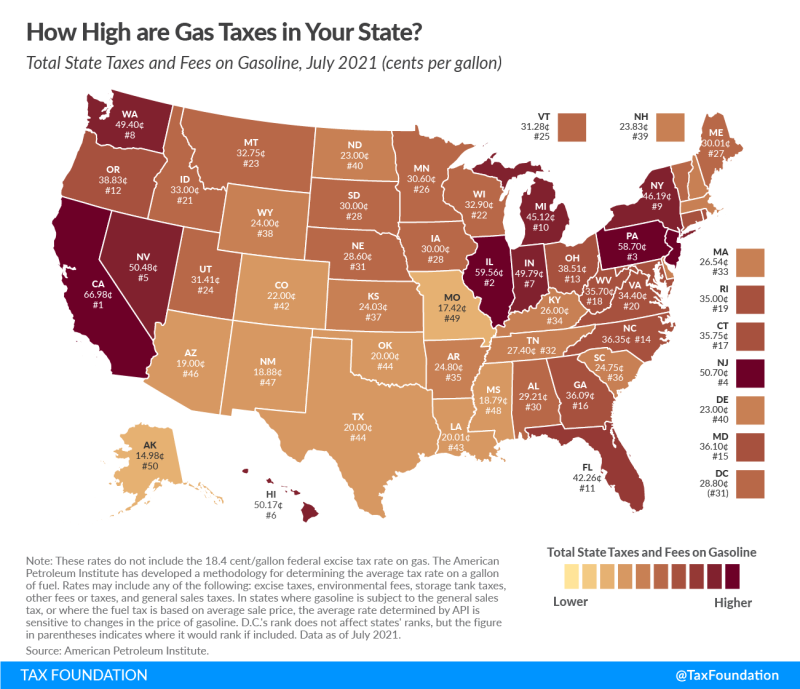 "States levy gas taxes in a variety of ways, including per-gallon excise taxes collected at the pump, excise taxes imposed on wholesalers (which are passed along to consumers in the form of higher prices), and sales taxes that apply to the purchase of gasoline," writes Tax Foundation policy analyst Janelle Cammenga in her preface to the map.

Whatever methodology, the state taxes add a bit more to the cost of topping off your auto.

Cammenga notes the same thing that Missouri gas tax increase supporters did. The lowest state gas tax rates can be found in Alaska at 14.98 cents per gallon, followed by Missouri (17.42 cpg) and Mississippi (18.79 cpg).

But at least, the federal gas tax one remains the same. For now.