UPDATE, Aug. 9, 2021: A last-minute push to limit new cryptocurrency tax reporting requirements in the $1 trillion infrastructure package (see Aug. 4 update below) failed today, despite a bipartisan agreement and a frenzied lobbying push, per The Washington Post.

UPDATE, Aug. 4, 2021: In response to the concerns elaborated on in the rest of this post, a bipartisan group of lawmakers has offered an alternative cryptocurrency revenue-raising plan. The amendment was crafted by Senate Finance Committee Chairman Ron Wyden (D-Oregon) and Republican Sens. Pat Toomey (more on his complaints later in this post) of Pennsylvania and Cynthia Lummis of Wyoming. It would limit the proposed information-gathering from crypto brokers to, per the legislative language, "only those persons who conduct transactions on exchanges where consumers buy, sell and trade digital assets." This would expressly omit individuals mining or staking crypto, or selling hardware or software to do so. Again, keep reading for more on the concerns that prompted the proposed infrastructure reporting revision, which will need 60 Senate votes to make it into the bill.

Infrastructure Week finally has arrived on Capitol Hill. This week, the Senate is expected to pass, per Democratic leadership announcements, a long-awaited infrastructure measure that was bipartisanly-negotiated and backed by President Joe Biden.

If the $1 trillion bill does indeed become law, it will provide the largest chunk of federal funds for public works in decades.

The around 2,700-page bill calls for $550 billion in new spending over five years, spread out on projects beyond traditional road and bridge construction and repairs. It also would pay for upgrades to public transit, bolster power grids, add protections for drinking water, expand broadband networks, and improve rail and Amtrak systems. Hey, there's a reason Biden is known as Amtrak Joe.

More info for the IRS: So how will Uncle Sam come up with this cash?

Part of the money will come from increased reporting of cryptocurrency transactions. The bill calls for existing third-party tax reporting rules to be extended to brokers who handle cyber financial moves.

As currently written, cryptocurrency brokers would be required to report such things as purchase and sales prices, transfers between brokers, and transactions of more than $10,000 to the Internal Revenue Service.

Joint Committee on Taxation estimates that the added information would help the IRS collect $28 billion over the next decade.

The Electronic Frontier Foundation (EFF) calls it "a poorly crafted provision that could create new surveillance requirements for many within the blockchain ecosystem. This could include developers and others who do not control digital assets on behalf of users."

Adding to crypto concerns is the speed with which the bill is expected to move.

How the broker reporting actually would work "is still very much an open question," wrote Rainey Reitman, EFF's Chief Program Officer for EFF. "Indeed, perhaps this extremely broad interpretation was not even the intent of the drafters of this language. But given the rapid timeline for the bill’s likely passage, those answers may not be resolved before it hits the Senate floor for a vote," said Reitman.

Republican rift, too: It's also causing rifts among Senate Republicans.

"Congress should not rush forward with this hastily-designed tax reporting regime for cryptocurrency, especially without a full understanding of the consequences," said Sen. Patrick Toomey (R-Pennsylvania), who serves on the chamber's banking committee. Toomey has indicated he would offer an amendment to change the bill, which he said as written would give the Biden administration the opportunity to crack down on not just cryptocurrency brokers but also bitcoin miners.

His GOP colleague, Sen. Rob Portman of Ohio who help write the bipartisan bill disagrees. Portman plans to speak on the Senate floor to underscore that cryptocurrency miners and software developers would not be targets under the new provision. The Treasury Department reportedly also has been asked to issue informal guidance clarifying the limited scope of the new cryptocurrency reporting proposal.

IRS continued interest in crypto collections: The added scrutiny on cryptocurrency, the general moniker for bitcoin, Ethereum, and the like, is not a surprise.

The IRS has for years been ramping up its efforts to ensure that it gets all the money it's due from cryptocurrency transactions. That includes obtaining as much information as it can from holders of virtual currencies, which the tax agency treats as an asset rather than legal tender. For next tax filing season, the IRS has tweaked the cryptocurrency question it asks of taxpayers at the top of Form 1040. 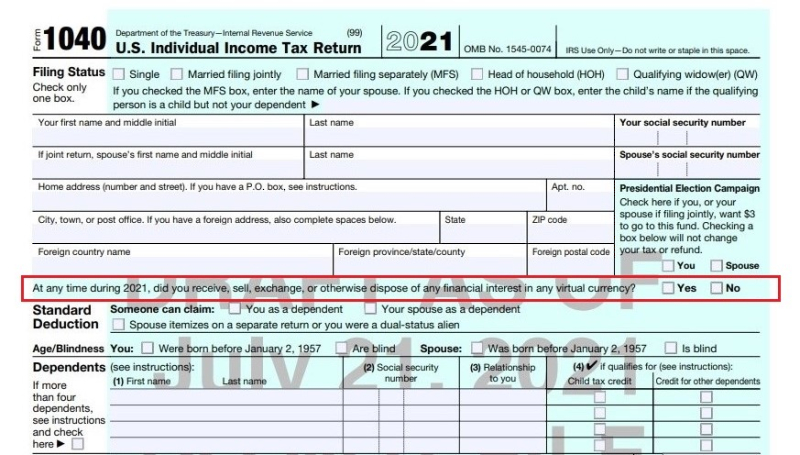 IRS Commissioner Charles Rettig in April told the Senate Finance Committee that the current Tax Gap — the amount of tax owed, but that the IRS has not been able to collect — could be as much as $1 trillion. Rettig said a large part of that missing tax money is likely attributable to noncompliance by virtual currency owners.

"We just don't have enough investor protection in crypto. Frankly, at this time, it's more like the Wild West," said SEC Chairman Gary Gensler in prepared remarks to the Aspen Security Forum. "We have taken and will continue to take our authorities as far as they go."

In a Twitter video also posted today, Gensler emphasized his and his agency's investor protection concerns.

If crypto is going to be widely adopted, it needs some rules of the road & a cop on the beat to enforce them.

To be clear, I am technology-neutral.

What I'm not neutral about: Investor protection. pic.twitter.com/e6GsSAyXhB

The SEC's worry, according to Gensler's forum speech, is that much of the cryptocurrency sector operates outside of regulatory frameworks that seek to protect investors and consumers, reduce crime, promote financial stability and protect national security.

"If crypto is going to be widely adopted, it needs some rules of the road & a cop on the beat to enforce them," Gensler added in his social media video.