Easy moves to help you avoid paying the lazy tax 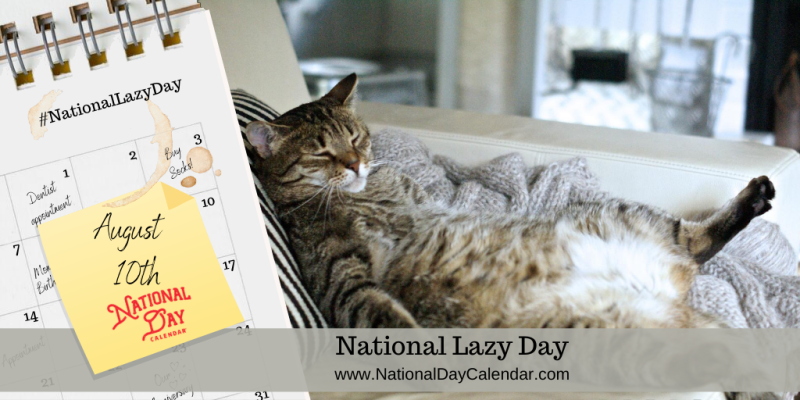 It's fitting that I just learned today, late in the day, that Aug. 10 is National Lazy Day. I definitely will note this date on next year's calendar, if I can muster the energy, so I make the most of it in 2022.

National Day Calendar, which keeps track of the myriad special designations for our 365 (plus one in a Leap Year), doesn't have much information on National Lazy Day. That would require some work, which is antithetical to the day's commemoration.

But it does say that Aug. 10 is the day where we are given permission to relax and kick back.

Personally, I don't have much of a problem being lazy. But it's hard for a lot of folks, especially here in the United States. While Europeans tend to take the month of August off, Americans are dogged in continuing to work, work, work, even during these Dog Days of summer. We are the world's worst at taking vacations.

But one area where too many of us excel is in paying the lazy tax.

Lazy tax costs: No, it's not an actual, government enforces levy. But it's a tax we've all paid at one time or another.

It's the extra we pay simply because we aren't in the mood — OK, too lazy — to take a small step or two that could save us money. In some cases, it could add up to major savings over the long run.

Let me stop you before you start yelling at me about how much you love your Starbucks. I love my occasional Frappuccino, too. I'm not here to lecture about treating yourself.

But I am here to remind you that a little bit of effort could pay off for you. They include simple financial actions like:

Lazy tax takes, too: The same lackadaisical approach applies in the tax world, too. Ignoring your federal and state taxes, could mean you're paying a lazy tax in addition to the ones you fork over to the IRS and your state tax collector.

Here are some ways to reduce your tax-related lazy taxes without expending too much energy.

Learn your tax bracket.
Since most of us pay at least some federal taxes on our earnings, we need to know how he figures what he gets. Start by checking out the tax brackets. There are seven of them (for now), and the income that falls into them changes each year for inflation. You can find details on the 2020 and 2021 tax rates and brackets in this post. The IRS will issue the 2022 inflations changes in a couple of months. You can check back here for that info.

By knowing the tax brackets, you'll see where you stand in your current federal assessment. You'll also see how close you are to moving up to a higher one. That way you won't be totally surprised when that much-deserved raise means you owe the U.S. Treasury more from each paycheck.

You'll also get an idea of how some tax moves, like contributing to or more to retirement accounts or donating to charities, could save you some tax money.

Maximize your retirement contributions.
Speaking of feathering your Golden Years' nest egg, regardless of what tax bracket you're in, make the most of tax-saving retirement options.

If you earn money, you can open an IRA. While a traditional IRA might give you an immediate tax break, a Roth IRA might be a better move, especially if you're younger. You won't get an upfront tax break from your Roth contributions, but when you take distributions after you retire, you don't have to give Uncle Sam a dime.

Also take advantage of your workplace retirement plan. Most companies that offer them do so as 401(k)s. You have a preset amount taken out of each paycheck and put into this traditional tax-deferred 401(k) or into, in some cases, a Roth 401(k). If you've been too lazy to look into your company's options, get on the stick. You're giving up money, especially if your employer matches at least a portion of your 401(k) contributions.

And if you haven't taken the time to reassess your 401(k) and possibly increase your contribution, quit being lazy and so this benefits season. The higher tax bracket you got bumped into because of that raise mentioned earlier could be eased a bit by putting some of your higher income into a retirement plan.

Check your withholding.
If all your income is from wages or salaries, and you've been paying a tax bill or getting a large refund each April (or July or May during the 2020 and 2021 COVID-delayed filing seasons), reassess your withholding amounts.

The conventional tax wisdom is to pay as close to what your final tax liability will be so that you don't end up owing or getting back a lot. You can do that by using the IRS' online tax withholding estimator and then adjusting your withholding amount at work.

I know, it's tempting to use overwithholding as a forced savings account. But then you're at the mercy of the IRS to process your return and send you your refund. The agency hasn't been the best at that of late. OK, it hasn't been even good or mediocre. Yes, the coronavirus pandemic problems added to the refund wait times, but there always will be something. When your withholding is off, you'll continue to be at the mercy of the IRS' efficiency issues.

By tweaking the payroll tax amount, you'll have your money in your hands year-round. If you're afraid you'll be tempted to spend it willy-nilly, set up an automatic deposit to a bank or credit union savings account. There it'll earn a tiny bit of interest, which the Bank of Uncle Sam doesn't pay for holding your over-withholdings, and you can get to it if an emergency arises before tax filing season.

Time for some time off: Well, that's enough effort for me today. In fact, I think I totally screwed up National Lazy Day.

So I'm calling it a day to try make up for my productivity. Enjoy the rest of your laziness this Aug. 10.

And enjoy Bruno Mars' official video of "The Lazy Song," which should be the today's official tune if anyone has the energy to declare it so.