UPDATE, Oct. 18, 2021: The Capone auction slipped by me, as I focused on the impending Oct. 15 filing extension deadline. But it went off as planned earlier this month, with the convicted tax felon's heirs getting more than $3 million for many of his personal items. The Chicago Tribune has the sale's details, and notes the capital gains taxes they will pay. 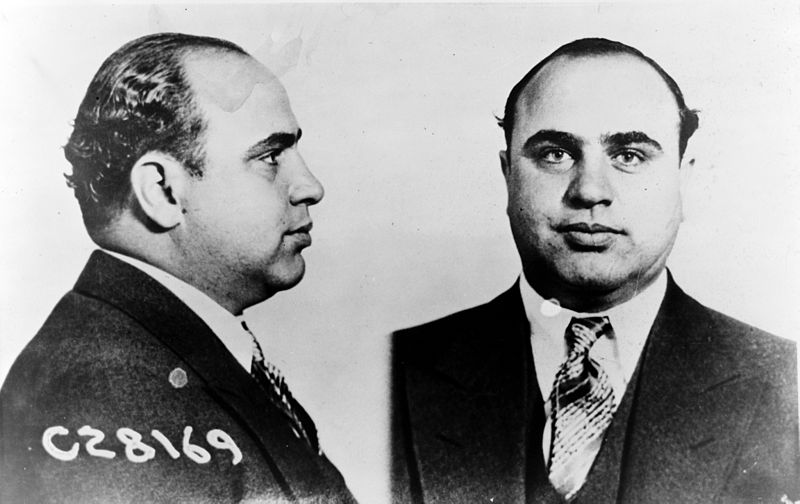 This U.S. Department of Justice mug shot of Al Capone was taken four months before his tax eviction conviction on Oct. 17, 1931. It is not one of the Capone items that will be auctioned by his granddaughters in October, but other personal photos and memorabilia will be for sale.

Some of Al Capone's personal property is going on the auction block in October.

The Chicago mob, nicknamed “Scarface” and dubbed “Public Enemy No. 1, is considered the man behind the infamous St. Valentine’s Day Massacre. He's also known for finally going to prison in 1931 for not paying federal income tax on his ill-gotten Prohibition-era gains.

Now Capone's three granddaughters are offering 174 items, such as diamond-encrusted jewelry with his initials, family photographs and handwritten correspondence, and what they say was his favorite handgun, a Colt Model 1911 semi-automatic pistol, to the highest bidders.

Witherell's Luxury Asset Auctioneers and Appraisers in Sacramento is handling the Oct. 8 estate sale event, dubbed A Century of Notoriety. Attendance at the event at the Sutter Club in the California capital city is invitation only. However, the auction house is conducting an online lottery for those who want a chance at an invite.

Diane Capone said she and her two sisters, children of Capone's only child, Albert (called Sonny by his father), decided to sell their grandfather's personal belongings because they all are in their 70s and are the only people who know the stories behind the memorabilia. They also are worried that the family history could be destroyed by wildfire.

Capone, the family man: The Capone heirs also want the public to see a different side of their notorious grandfather.

"He was very loving, very devoted to family, very generous, and the letter that we have is such a poignant, beautiful letter from a father to his son. These are things that the public doesn't know about," the 77-year-old Capone told The Sacramento Bee newspaper. 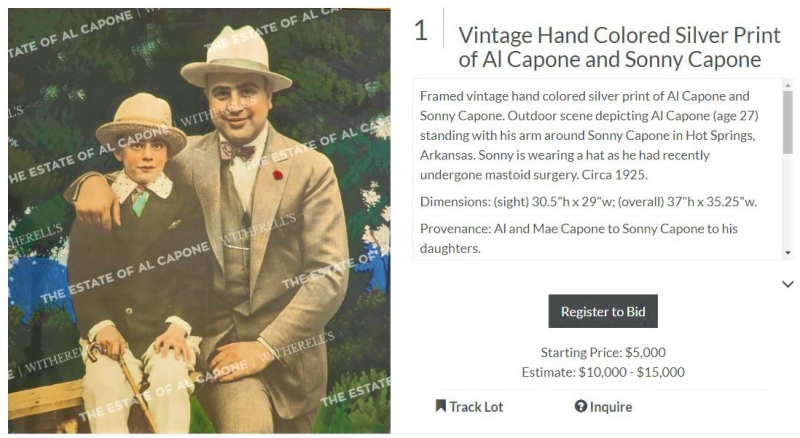 A photo of Al Capone and his son Albert, nicknamed Sonny by his dad, is one of the mobster's personal items to be auctioned. (Screen shot from Witherell's Capone estate sale web page)

"My grandfather certainly did some bad things during his life, that was part of his public life," she said. "He went to jail, he served his time, he paid his debt to society and after he was released, in the last years of his life, he did everything to make peace with God and with his family, and with everybody."

Museum, not money suggested: That sentiment is not shared by others.

Mary Mitchell, a columnist at the Chicago Sun-Times, calls the auction "shameful" and "obscene" because it minimizes the harm to Capone's victims.

The head of a California advocacy group for crime victims, echoes that characterization, calling the Capone memorabilia sale, which is estimated will net his heirs around $700,000, an insult to his victims.

Rather than being sold, Nina Salarno, president of Crime Victims United of California, suggests the Capone items should go to a museum.

Captivated by crime and Capone: Whatever your position on the Capone auction, welcome to America. I'm not being flip. Rather, we are a nation that's fascinated with crime.

That means interest in the men (mostly) who head criminal syndicates has only grown as their stories, and fictional ones based on them, are shared across popular media.

I plead guilty here. I not only watch crime-themed TV shows and movies and read such books, I post about tax crime, including pieces about Capone and his Internal Revenue Service connections. A lot. Just a few are listed in the "of interest" section below.

I won't, however, be bidding on any of Scarface's personal items. And I see where the anti-auction folks are coming from.

But I also understand the financial and personal perspectives of the Capone granddaughters.

Again, welcome to America, and our perpetual mixed messaging, on crime, taxes, and just about everything else.