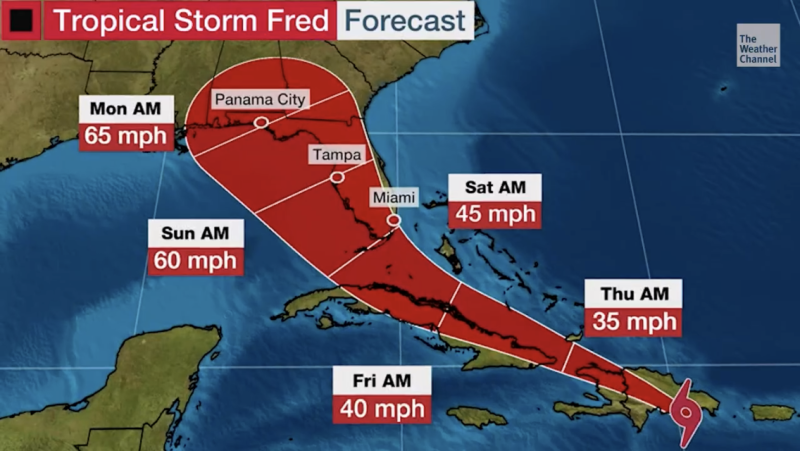 Hurricane season 2021 is back. Tropical Storm Fred is heading toward the eastern Gulf of Mexico, with much of Florida in the National Weather Service's cone of uncertainty. (Screen shot image from The Weather Channel)

2020 was one of the busiest hurricane seasons ever in the United States, creating major issues particularly along the Gulf Coast. Will 2021, be a replay?

Hurricane prediction hiked: Uncle Sam's official weather watchers now predict at least 15, and possibly 21, named storms, up from 13 to 20 in the first forecast. These are tropical systems that have winds of 39 miles per hour (mph) or greater.

The updated prediction also warns of 7 to 10 hurricanes, up from the 6 to 10 first forecast. These those storms have winds of 74 mph or higher.

The one tiny bit of eye of hurricane calm is in NOAA's August forecast revision is that it keeps its major hurricane prediction at 3 to 5. Major hurricanes are those designated as category 3, 4 or 5 with winds 111 mph or greater.

'Canes cranking back up: When NOAA's new tropical storm numbers were issued, the 2021 season was still in a lull after an early start for seventh straight year. This week, though, the tropics have reawakened. 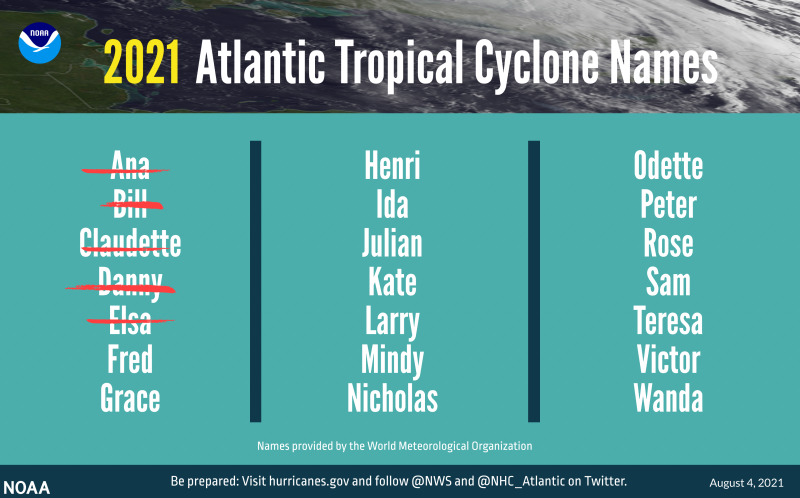 The good news is that forecasters expect Fred to stay at tropical storm level. Let's hope they're correct.

Don't disregard storm status: Yeah, Fred is an easy name to poke fun at, with apologies to all my readers with that name or nickname.

It's also tempting to not get too worked up about Fred since he's at tropical storm (TS) level. But don't be cavalier.

Every hurricane season it's proven that rain and floods cause as much if not more damage than tropical winds.

If you're in the storm's projected path, which could change as TS Fred nears the eastern Gulf of Mexico, get ready. Now. My earlier post even before the start of the 2021 'cane season has some storm preparation tips for individuals.

Business readiness critical, too: Since I work from home, and I'm a one-person operation, I tend to forget about business storm needs. My individual preparations take care of my writing company's concerns.

Security tax docs: Don't forget to include tax records in your move of company data to a storm-safe space. If you file a claim in connection with a major disaster, you're likely to need current and prior tax year information.

If you do lose your tax documentation, the Internal Revenue Service can help in your post-disaster records reconstruction.

That's good to know, but again, it's always better to get ready instead of cleaning up afterwards. You'll have enough to deal with after a disaster hits.

Don't add to that stressful list by having to re-do something that you can take care of now before disaster strikes you and/or your business.

Global storm damage: But wait, there's more (and some shameless plugging). I just posted at my tumblr blog Tumbling Taxes about a funky large piece of outdoor modern art that was washed away when a recent typhoon hit Japan.

Officials tried to get to the giant pumpkin by Japanese artist Yayoi Kusama and take it from the pier where it's usually perched before the storm hit, but the typhoon moved too quickly for them.

But there's good news. Although the pumpkin was damaged a bit, it was recovered, is being restored and eventually will return to its outdoor display.