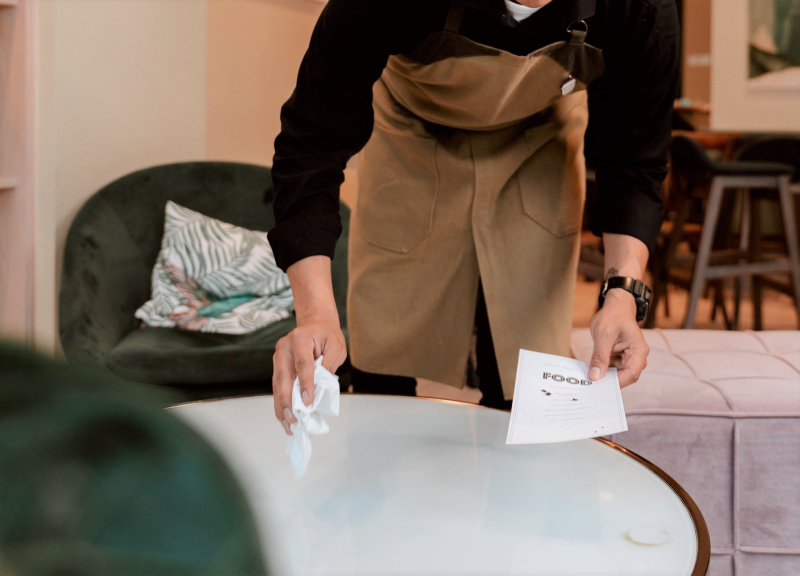 Cleaning up after customers. (Photo by RODNAE Productions from Pexels)

Some businesses reopening after the lifting of COVID-19 pandemic restrictions have struggled to hire workers. The big debate is whether coronavirus relief, primarily Uncle Sam's added unemployment benefits, or low wages is why so many jobs are going unfilled.

That argument is likely to continue, along with the Congressional battle to raise the federal minimum wage. Earlier this year, the effort to increase it from $7.25 per hour to $15 an hour failed.

Some state, city minimum wages hiked: Wage increase advocates, however, have had more success at other governmental levels. Higher minimum wages were among the news laws that kicked on July 1 as states and some cities started their new fiscal years.

Certain workers in Nevada, New York and Oregon are making more. Minimum wages also went up for some employees in several cities nationwide.

The big winners are workers in Berkeley, California, who saw their pay go up 25 cents to $16.32. Down the coast, businesses in Los Angeles with fewer than 25 employees increased their minimum wage by 25 cents to $15.25. Across the country, the District of Columbia's minimum wage bump of 20 cents gives those workers $15.20 an hour and the annual increase is indexed to the cost of living.

While that's generally good news, in some cases even a pay hike is not enough for many workers to live comfortably.

But Uncle Sam, despite his paltry $7.25 per hour minimum wage, can help via some tax breaks for lower-paid workers, even those making a bit more than the minimum wage. Here are five federal tax considerations that could help boost your bottom line.

1. Determine whether you must file a return.
If you don't make a lot of money, the first thing you need to ask is whether you even have to file a tax return.

The filing requirement is based on three factors: Your age, your filing status and your income. Generally, once you reach a certain income level, the law requires you to file.

Several tables in the IRS Form 1040 instructions have specifics on who has to file. Generally, for the 2020 tax year, the income filing gross earnings thresholds for taxpayers younger than age 65 were $12,400 for single taxpayers; $18,650 for head of household filers; and $24,800 for married couples filing jointly.

Older workers can make a bit more before they have to file.

The amounts are adjusted annually for inflation, so you'll be able to earn more this year before you have to send the IRS a return.

And even if you don't have to file, if you had taxes withheld, you need to send the IRS a return. That's the only way to get back that money. In this case, consider using the IRS' Free File program so that it doesn't cost you to get your refund.

2. Collect the Child Tax Credit, next filing season or sooner.
This year there's another reason you also should file a return even if you aren't required to do so — again using Free File if your income is $72,000 or less regardless of filing status. Sending Uncle Sam that 1040 likely will get you some added monthly cash through the end of the year.

The American Rescue Plan Act, more popularly known as the latest COVID relief bill, included a provision for the early distribution of expanded Child Tax Credit benefits. These Advance Child Tax Credit amounts of $300 or $250 depending on your qualifying dependent children's ages will be delivered monthly July through December.

3. Explore the Earned Income Tax Credit (EITC).
Another great but often overlooked tax break for lower- and middle-income workers is the Earned Income Tax Credit. This tax break, usually seen in print as EITC or EIC, was created in 1975 as a way to help offset the Social Security taxes that take such a bite out of the paychecks of workers who don't make a lot of money.

It's a balancing game with the EITC. You have to have a job (hence the "earned income" in the name) to be eligible for this credit, but you can't earn too much. But if you qualify, since it's a credit you get to use the amount to reduce or eliminate any taxes you might owe.

Even better, it's one of the few refundable credits. That means if you don't owe the IRS anything, the credit amount will be sent to you as a refund.

A common EITC misperception is that it's only for folks with dependent children. Not true. While you'll be eligible to collect a larger credit if you do have kids, childless folks can get some credit cash, too.

The EITC, like the Child Tax Credit, was boosted this year to help get more money to folks who most need it due to pandemic economic struggles. For 2021, the maximum available EITC amounts are:

To get any EITC under the new ARPA inflation adjustments for the 2021 tax year, you must make at least the following amounts based on your family size:

There are, of course, some specific qualifications to meet before you can claim the EITC. The IRS' online EITC Assistant can help you determine whether you're eligible for this credit and if so, how much you can claim.

A very nice feature of this deduction is that you don't have to itemize to claim it. You'll find the option to deduct $2,500 worth of student loan interest is what is still known (at least by me and many in the tax community!) as an above-the-line deduction. You don't have to itemize to claim it. It's one of 23 tax breaks you claim directly on Form 1040's Schedule 1. For 2020 and 2021 tax years, the amount of the student loan interest deduction is eliminated if your MAGI as a single taxpayer is $85,000 or more or greater than $170,000 for married joint filers.

Of course, if you're making more than 85 grand, why are you reading about minimum wage tax breaks?

5. Do your education tax credits homework.
If you have a minimum-wage job and hope to one day make too much to be eligible for some tax breaks, you might need to go back to school. The tax code can help out here, too. There are several education tax breaks that help you cover many of your higher education costs.

Two of the most popular are the American Opportunity Credit and the Lifetime Learning Credit. They are worth, respectively, $2,500 and $2,000. Even better, because they are tax credits, they directly offset any tax you might owe, making them much better than deductions at tax time.

Again, there are requirements, primarily income-based requirements to claim these credits, but the income phaseout thresholds on the Lifetime Learning Credit have been increased, making it available to more students of all ages.

These are just a few of the ways the Internal Revenue Code can help you supplement a not-quite-enough paycheck. I hope these tax tips help and I hope that you get that decent raise you deserve soon!