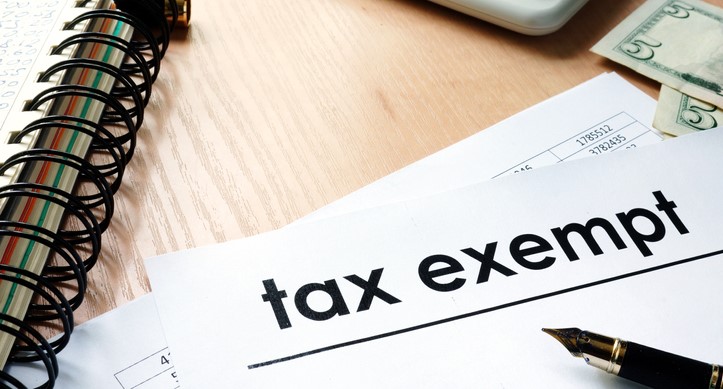 Knowing whether a group is a tax-exempt organization is important, not just from Uncle Sam's revenue collection (or not) perspective, but also from a public standpoint.

Donors who want to deduct charitable gifts need to know that the group to which they're giving is legit in the Internal Revenue Service's eyes. These public charities are referred to as 501(c)(3) organizations, getting their name from the section of the tax code that created them.

However, there are several other tax-exempt classifications under Internal Revenue Code section 501(c). They are granted, for example, to groups that have charitable, educational, religious, or similar purposes.

Most organizations, except churches, must apply to the IRS for tax-exempt status. And exempt organizations, again excluding churches or similar religious entities, must make their returns, reports, notices, and exempt applications available for public inspection.

The many (29 at last count) not-for-profit demarcations (too many, in my opinion) are, in some cases, quite esoteric and immaterial to most of us.

But now and then we get reminded of the many nonprofit variations.

Political, or not, nonprofits: Regular readers probably recall the contretemps from 2013. That's where the then-chief of the IRS Exempt Organizations division came under fire, and eventually left agency employ, after it was determined the unit used inappropriate search criteria in focusing on certain conservative groups seeking the favorable 501(c)(4) tax-exempt status.

These nonprofits, per the tax code, are "civic leagues or organizations not organized for profit, but operated exclusively for the promotion of social welfare … and the net earnings of which are devoted exclusively to charitable, educational, or recreational purposes."

There's still a subdued political debate over 501(c)(4) status and the IRS methodology in OKing it. But this week, a more run-of-the-mill case got attention when the IRS did an about face on a 501(c)(3) request.

On July 7, the IRS reversed that decision, granting the group its desired tax status.

There was no explanation given for the change, but admitted cynic and Taxable Talk blogger Russ Fox (with a hat tip to Joe Kristan's EideBailly roundup for pointing out the post) believes the change can be tied to the blowback in the IRS' prior 501(c)(4) controversy:

"[T]he IRS figured out that only bad things would happen if the denial were to stand. Indeed, under President Biden’s proposed budget the IRS is looking at an $80 billion increase in funding. I strongly suspect IRS management realized that funding was in grave danger if the IRS continued to publicly discriminate against conservative (and religious based) nonprofits."

I am in the same Congressionally cynical camp. Conservative Representatives and Senators would have used the case to argue against, if not actually cut, the proposed IRS budget hike.

And given the problems the agency is facing due to COVID-19 pandemic tax return processing, tax refund issuance delays, and new coronavirus relief payments, it also doesn't need any added bad public relations.

Reporting nonprofit violations: Most of the time, the IRS relies on its staff to vet applicants for nonprofit status. Once that's done, then it depends on the groups to follow the requirements to maintain their tax-favored situations.

However, a nonprofit can lose its tax exemption if it doesn't file required returns for three consecutive years. In these cases, the IRS publishes a list of non-filing organizations whose tax-exempt status was automatically revoked.

As for other nonprofit status violations, the IRS occasionally gets help from tipsters.

For those eagle-eyed unofficial nonprofit examiners, the IRS recently updated information on its website on how a person who suspects that a tax-exempt organization may not be operating in compliance with the tax laws may file a complaint with the agency about the organization.

If a person suspects that a tax-exempt organization is not complying with the IRS' rules — the tax term for this is suspect organization — then the person may send a complaint to the IRS' Tax Exempt and Government Entities Division (TEGE).

Filing Form 13909: The complaint can be made as a letter. But the easiest way to report suspected nonprofit status violations is to file Form 13909, Tax-Exempt Organization Complaint (Referral) Form. 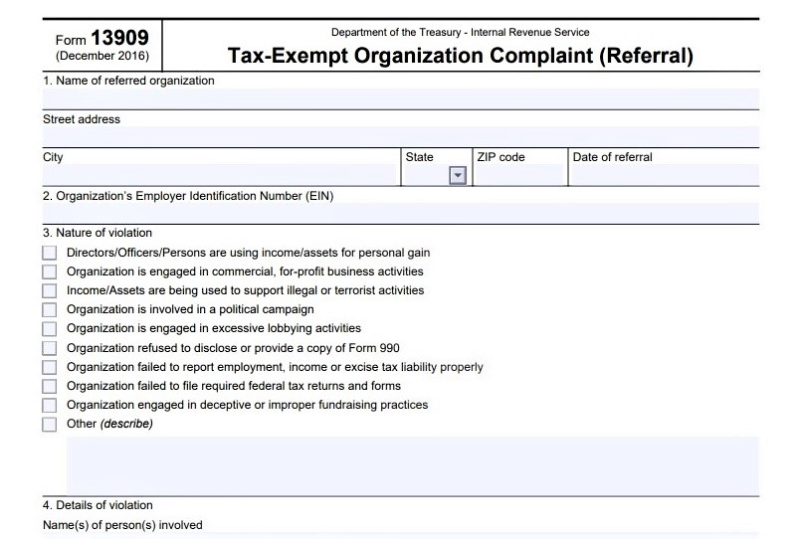 The above image is an excerpt of the two-page Form 13909, which has been added to the ol' blog's Tax Forms Fiesta! page. Directions are on the form's second page.

Form 13909 (or the letter, if you prefer) should include the following information:

Send the completed form, along with any supporting documentation, via U.S. Postal Service mail to:

If you prefer, you can fax it (not a toll-free number) to (214) 413-5415 or email it to eoclass@irs.gov. If you email it, the IRS notes that the transmission of the form and any attachments are not encrypted for security.

Limited IRS follow-up: Once the IRS gets the complaint, the IRS will mail a letter to the person who reported the issue acknowledging receipt of the complaint. But that's as much information as you'll get.

The IRS won't send any status or progress update on the complaint because of privacy constraints (26 U.S. Code § 6103) governing the disclosure of tax information.

So you'll just have trust in the private process and be content that you did what you could to ensure the tax laws are followed. Or keep checking with the group you cited to see if it notes that its status has changed.