Some of the world's billionaires are looking to escape earth, but for those who like terra firma, New York City is home to most of the world's richest people. (Photo of lower Manhattan skyline by MusikAnimal via Wikimedia Commons)

Richard Branson today proved yet again how different the rich are from you and me. The British billionaire owner of Virgin Galactic and three spaceplane crewmates reached suborbital heights on Sunday, July 11, before gliding back to earth.

I was once a child with a dream looking up to the stars. Now I'm an adult in a spaceship looking down to our beautiful Earth. To the next generation of dreamers: if we can do this, just imagine what you can do https://t.co/Wyzj0nOBgX #Unity22 @virgingalactic pic.twitter.com/03EJmKiH8V

Breaking through earth's boundaries is one of the fixations of the world's richest men. Jeff Bezos has Blue Origin and Elon Musk his SpaceX. They and their wealthy peers, even those with more terrestrial and relatively mundane pursuits, can afford to do what they want.

They're afforded that luxury in part, per a recent Pro Publica report, because they take advantage of legal tax loopholes. These benefits work for folks whose primary source of income is from the businesses they own, in whole or part, and investment/capital gains earnings.

Even in COVID times, wealth increased: Also not surprising is that even in the face of a global pandemic, the rich didn't suffer that much. They were spared the financial disasters of regular folks, who lost jobs when COVID-19 shutdowns were necessitated around the world.

In fact, according to recently released study, the size of the global ultra high net worth (UHNW) population — individuals with a net worth of more than $30 million — rose by 1.7 percent in 2020 to 295,450 individuals.

OK, the richest individuals did take a bit of a hit; I know, que lastima … not. The increase in their numbers was at a much slower pace than the near double-digit growth a year earlier, notes the latest Wealth-X World Ultra Wealth Report.

But, added the 2020 UHNW analysis, it was "a resilient performance nonetheless amid the upheaval of the Covid-19 pandemic — national lockdowns, international travel bans, trade disruption and the deepest contraction in world economic output for a generation."

Overall, this ninth annual report found that in addition to adding more members to the ultra-wealthy world, this group's combined net worth also grew, up 2 percent to $35.5 trillion.

That combined wealth is impressive enough to earn this week's By the Numbers recognition.

Age, gender matters: In addition to favoring the wealthy, the young again made out best. The report says the fortunes of the under-50s, the youngest and smallest UHNW cohort, grew by the largest margin. Technology as a primary industry accounts for a greater proportion of individuals in this younger group, notes the report. "The wealth of many such individuals was boosted over the course of the year as digitalization expanded rapidly during the surge in home working and online shopping."

And there's some good news for women.

While women remain a clear minority in the UHNW club, comprising just 10 percent of the group, the proportion of ultra-wealthy women has been on a gradual upward trend in recent years. The report attributes this to changing cultural attitudes and growth in female entrepreneurship, as well as ongoing wealth transfers between generations.

Another gender equity positive in the report is that, in contrast to the general population, there was a negligible difference in UHNW wealth impact by gender in 2020.

Where the richest are: One thing that didn't change was where the rich are getting richer. For a second consecutive year, the best-performing regions were North America, led by the United States, and Asia. 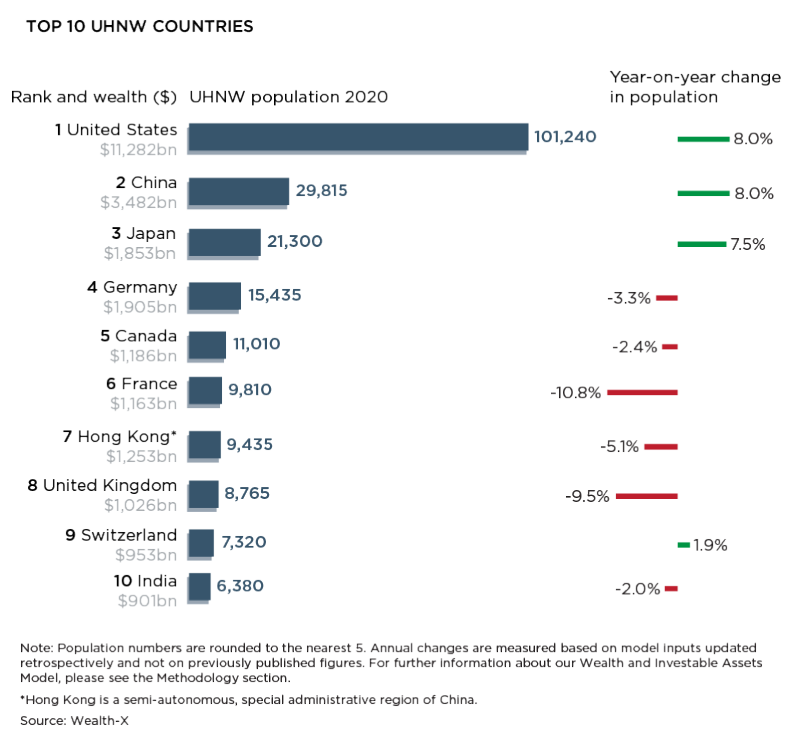 Reflecting its status as by far the world's largest UHNW market, the United States accounted for six of the top 10 cities in 2020. The size of the ultra-affluent class across these six cities — New York City, Los Angeles, Chicago, San Francisco, Washington, D.C., and Dallas — expanded by an average of 10 percent, six times faster than the rise in the global UHNW population. This was due largely to the bumper year for asset portfolios in the United States. 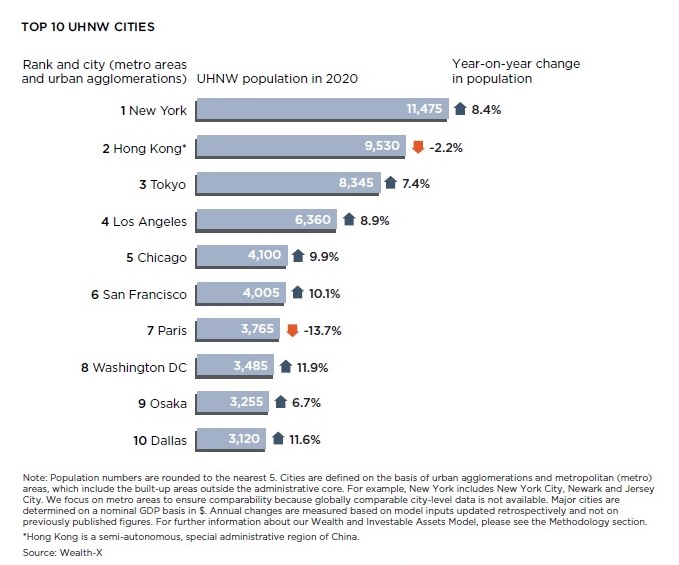 The Big Apple and its greater metropolitan area that includes Newark and Jersey City experienced an 8.4 percent increase in its ultra-wealthy class. This allowed it to widen its lead over second-place Hong Kong, which declined by 2.2 percent last year. That drop was due to China's extensive pro-democracy clampdown and accompanying social unrest.

Another U.S. city, San Jose, took the top spot when the density of UHNW individuals was measured. This ranking, notes the report, is dominated by moderately sized cities with a strong focus on either technology or financial services. As the cultural and wealth center of Silicon Valley, the metro area of San Jose has one UHNW individual for every 727 city residents.

Different economic, social, political paths: So why should we care that, as has generally been the case for ages, that the rich keep getting richer? Because the trend has implications beyond just bank accounts.

The Wealth-X report also underscores the growing global social, political, and tax turmoil as the economic divide widens, during and once we're past the pandemic.

Expansion of ultra-wealth at the same time there's widespread unemployment and falling incomes for the larger, far-from-affluent sectors underlined the polarizing effects of the pandemic across society, notes the report.

"The extent to which the ultra-wealthy were able to weather the storm (and, in some cases, significantly expand their fortunes) in one sense augers well for future wealth-creation prospects," wrote the report's authors.

"However, it will also raise more questions over widening wealth inequality and could spur more concerted redistributive policy efforts in areas such as tax and regulation."