Commuting is back, along with tax-free transportation fringe benefits 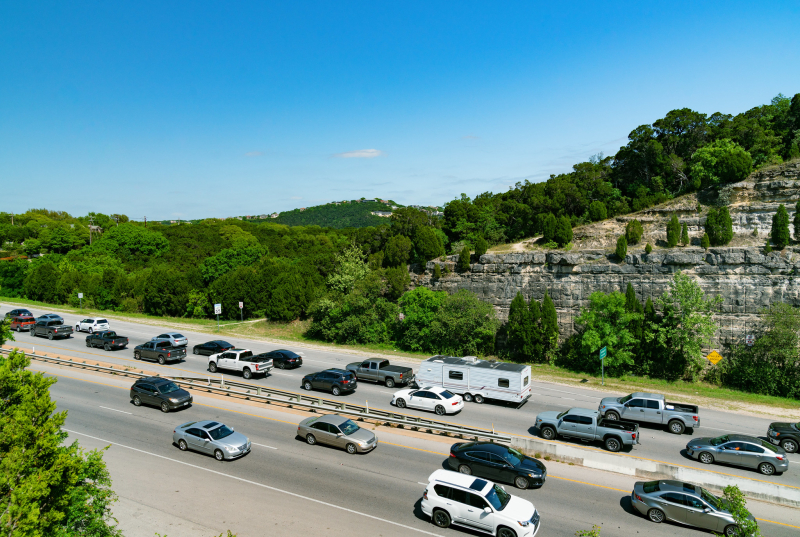 With companies reopening as the coronavirus has abated somewhat, rush-hour traffic has returned to highways across the United States. Austin area workers, like these on the Capital of Texas Highway, are among those resuming commuting. (Photo by Tony Webster via Flickr)

Many workplaces across the United States are returning, at least in part, to pre-COVID-19 form. That means many employees are heading back to their offices.

And that means commuting is returning, too.

The good news for many workers is that they get tax-free help in going back to their jobs. Since it's been a while between bus, train, vanpool or car trips to the office, here's a look at what the Internal Revenue Service calls qualified transportation fringe benefits.

A valued workplace perk: As we've spread out, or more accurately sprawled, across the country, commuter assistance has joined health and retirement as a valuable benefit offered to employees by their bosses.

The idea of helping workers cover the costs of getting to and from the office as an employer-provided nontaxed benefit is particularly popular in urban areas that have mass transit systems. Advocates of incentivizing public transportation commuting say it eases roadway traffic congestion and improves air quality.

But we Americans still love our autos. So there also are tax-favored ways workplaces help those hitting the highways to get to work. They include covering some costs of pooling to get to work, as well as paid parking for those who insist on driving to their jobs in their cars.

The commuter account essentially is the transportation equivalent to another popular workplace benefit, the health care flexible spending account (FSA). When employees contribute to a commuter account with pre-tax dollars, they owe less in federal income, Medicare, and Social Security taxes.

Parking, mass transit dollars: The Tax Cuts and Jobs Act (TCJA), aka the Republican tax reform measure that became law at the end of 2017, complicated transportation benefits for companies.

But for commuting workers, the bottom line when it comes to qualified transportation benefits is that workers save some transport dollars and taxes.

For the 2021 tax year, the tax-free or pre-tax limit for employer provided commuter fringe benefits in connection with public transportation is $270 per employee per month. This covers the cost of any mass transit pass, token, farecard, voucher, or similar item entitling a person to ride a bus, rail, or ferry to work.

Van pools also are covered here, although there were some changes made in 2020 due to transportation accommodations that year because of COVID-19 pandemic workplace commuting considerations.

For employees who drive into work on their own, the qualified transportation benefit could be a $270 per employee per month for parking at or near the office.

However, if an employer pays an amount over the monthly limit to an employee, the IRS points out in IRS Publication 15-B that the company must include the excess in the employee's wages, minus any amount the employee paid for the benefit, as taxable income.

No more tax-free two wheeling: Another transportation change under the TCJA is that employees who bicycle to work no longer get any workplace help covering those costs.

No more tax joy for Pee-wee Herman or others in biking to work under 2017's tax reform changes. (Giphy image)

The bicycling benefit took effect in 2009, as part of the prior year's energy act. It added qualified bicycle commuting reimbursement to the list of qualified transportation fringe benefits.

Under that provision, employer reimbursement was allowed for up to $20 per month for "reasonable expenses incurred by the employee for the purchase of a bicycle and bicycle improvements, repair, and storage if the bicycle is regularly used for travel between the employee's residence and place of employment."

However, unlike the mass transit and parking benefits, the $20 a month biking amount was not indexed for inflation. That meant companies could provide bicycle commuters a maximum of $240 per year tax-free to cover their two-wheeled trips to and from the office.

It wasn't much, but any amount helped. Until 2018. That's when the TCJA eliminated the bicycle commuting benefit. As with other temporary provision of the tax reform law, it's suspended through 2025.

Will the bicycling to work tax break be back? Perhaps.

In the meantime, if you live close enough to comfortably bike to work, you probably are within a mass transit area. You might want to shift to that transportation mode, at least until 2026 rolls around.