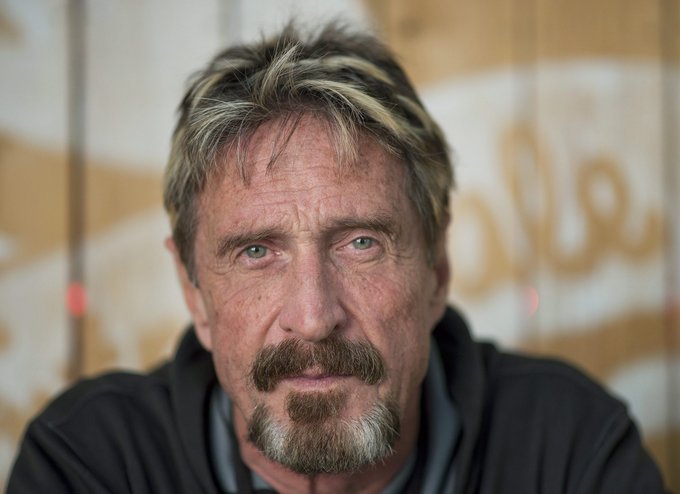 Photo of John McAfee shared by his wife earlier this year as part of a Twitter post arguing for his release from a Spanish prison.

Last week, millionaire software developer John McAfee was in a Spanish court arguing that he shouldn't be extradited to the United States to face tax evasion charges.

Today, MacAfee was found dead in his cell at a Barcelona-area jail.

There's no official word on the cause of death. News reports, however, say a preliminary investigation found no signs of foul play. Early indications are that McAfee hanged himself.

Hours before the discovery, Spain's National Court ruling on McAfee's legal fate was made public. The jurists had determined on Monday, June 21, that the 75-year-old tycoon would have to return to the United States to face the criminal tax charges.

However, that decision was not the final word. The ruling could be appealed. Also, any final extradition order would have to be approved by the Spanish Cabinet.

During the hearing last week, McAfee had argued that the tax charges were politically motivated.

Nishay Sanan, the Chicago-based attorney defending the tech entrepreneur on the U.S. tax charges, called McAfee a fighter and appeared to echo his late client's contention that the legal action was personal.

"He tried to love this country but the U.S. government made his existence impossible," Sanan said in a written statement issued following the announcement of McAfee's death. "They tried to erase him, but they failed."

Spanish jail, U.S. tax charges: McAfee, creator of the computer anti-virus program that bore his name (he sold the company in 2010 to Intel), was arrested in October 2020 at the Barcelona airport in connection with the U.S. tax charges.

The indictment accused McAfee of evading taxes and willfully failing to file tax returns from 2014 to 2018 despite making millions during that time. Prosecutors with the U.S. Attorney's Office for the Middle District of Tennessee said McAfee owed the U.S. government $4,214,105 in taxes before fines or interests for undeclared income in the five fiscal years cited in the indictment.

This week's ruling by the three-member Spanish court agreed to extradite McAfee only in connection with U.S. tax charges from 2016 to 2018.

The Department of Justice has not issued a statement regarding McAfee's death.