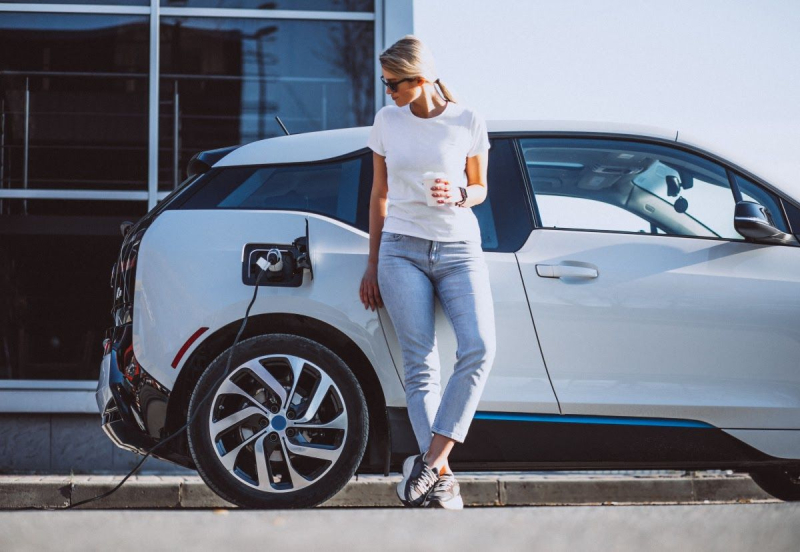 Could it be? Is Infrastructure Week finally happening?

There are bills and revisions to bills and working groups and bipartisan agreements and partisan criticisms of agreements. The only thing that the, at last rough count, eight transportation-plus proposals floating around on Capitol Hill have in common is that none has the votes right now in either chamber to pass.

But things are fluid and could change, for better or worse (depending on your political and fiscal position), at any time.

The only certainty is that something must be done by the end of this 2021 fiscal year — that's Sept. 30 — or all existing federal spending on infrastructure will expire.

Highways' flawed funding: The transportation component that most of us focus on is the Highway Trust Fund. It pays for repairs and new construction of U.S. roads and bridges.

It gets its money from what almost all admit is the inadequate federal gas tax, which has been stuck at 18.4 cents per gallon since 1993.

One House member, Republican Rep. Don Young of Alaska, has proposed adjusting the stagnant gas tax to account for inflation. That's not going to happen.

Another GOP member of Congress, Maine's Sen. Susan Collins, is part of a bipartisan working group that would like to see electric vehicle (EV) owners pay their fair share for using those gas-tax funded pathways.

"Right now, they [EV owners/drivers] are literally free riders because they're not paying any gas tax," Collins said during an appearance Sunday, June 13, on CBS News' Face the Nation. These auto owners would be subject to a mileage tax to cover the transportation taxes they don't pay since they don't use fossil fuels.

More interest in mileage taxes: The fate of the Collins' group's plan also is unclear. But the discussion of a mileage tax, even if just for EVs, has been gaining ground.

Mileage taxes for all instead of fuel taxes has been toyed with at federal and state levels for a while. The idea gained ground when cars manufacturers started making more fossil-fuel efficient vehicles. It increased when hybrids autos became the rage.

The arrival of EVs and their growing popularity, in part thanks to tax credits (which some in Congress want to increase), has increased calls for mileage taxes on the electric-powered autos.

Even Transportation Secretary Pete Buttigieg appears to be a fan. The Biden Administration official said in March that a vehicle mileage tax could be on the table in infrastructure talks. Then he quickly walked back the new tax talk.

Still, the idea is slowing creeping onto the transportation revenue on-ramp.

EV mileage anxiety issues: Mileage, even when it's untaxed, is one of the biggest drawbacks of EVs. A lot of folks — yes, that's me furiously waving my hand in that group — fear that an electric car will run out of juice with no charging station in sight.

EV makers know this. That's why they are upgrading their batteries. Supporters of EVs also are working on installing universal charging stations in more parts of the country.

And EV owners and potential buyers with range anxiety will want to find the auto that gives you the biggest charge for your charging. A recent EV study could help here.

Zutobi, an online driver's education resource, recently updated its EV Miles Report. The main focus is on the cheapest electric vehicles to charge and drive in the United States. It also highlights which states are the most affordable to own an EV.

And one of the factors used to come up with these findings is each EV's real range in miles per battery charge.

It's no surprise that Tesla wins here. Yes, that's Elon Musk over there smirking. 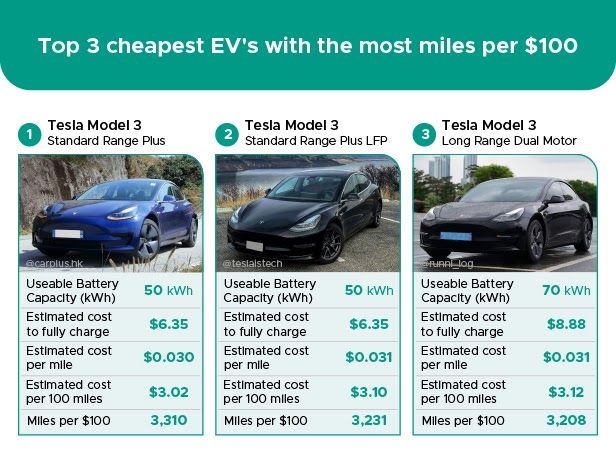 The Tesla Model 3 Long Range Dual Motor and its Model 3 Performance each get 285 miles per charge. Close on their heels is Hyundai's Kona Electric 64 kWh, which will get you 245 miles down the road before needing to be plugged in again.

Those distances, however, don't put any of the three EVs at the top of Zutobi's 10 cheapest electric vehicles to run. That honor goes to Tesla's Model 3 Standard Range Plus EV.

You can see the rest of the top 10 in the table below:

Where you live also makes a difference, says Zutobi, on how economical an EV is to drive. The 10 states where you get the most miles per $100 are.

The full report has more, like where it costs you the most to drive an EV. Spoiler, it's Hawaii. But then America's Island Paradise has other things going for it.

Thanks for doing the math. The differences are quite significant if you ask me.