Tax Day 2021 has moved to Aug. 2 for Tennessee taxpayers in 23 counties that were hard hit by tornadoes, other storms, and flooding. 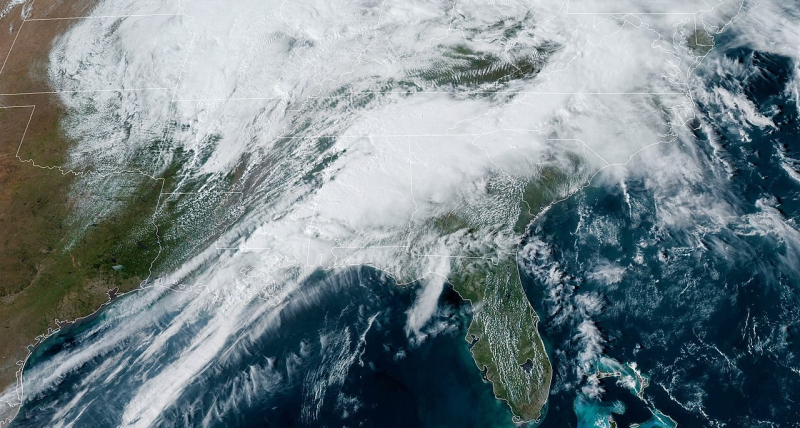 Satellite view from GOES-16 showing the storm system responsible for the tornado outbreak across much of the southern United States on March 25, 2021. (Image courtesy National Oceanic and Atmospheric Administration via Wikipedia Commons)

As we enter the final weekend of the regular tax-filing season, millions of taxpayers have yet to file their returns. Some are simply uber-procrastinators.

Others, however, don't have to worry about meeting Monday's May 17 deadline thanks to extra time granted by the Internal Revenue Service.

These filing delays, however, are not something the taxpayers sought. They get more time because they live in areas that were hit by major disasters earlier this year.

Some Tennessee residents now are part of that group.

The IRS announced on Friday, May 14, that taxpayers in parts of the Volunteer State that were stuck by recent spring storms and tornadoes now have until Aug. 2 to file various individual and business tax returns and make related tax payments.

Those counties were declared major disaster areas by the Federal Emergency Management Agency (FEMA) after they were hit by storms, tornadoes, and flooding between March 25 and April 3. 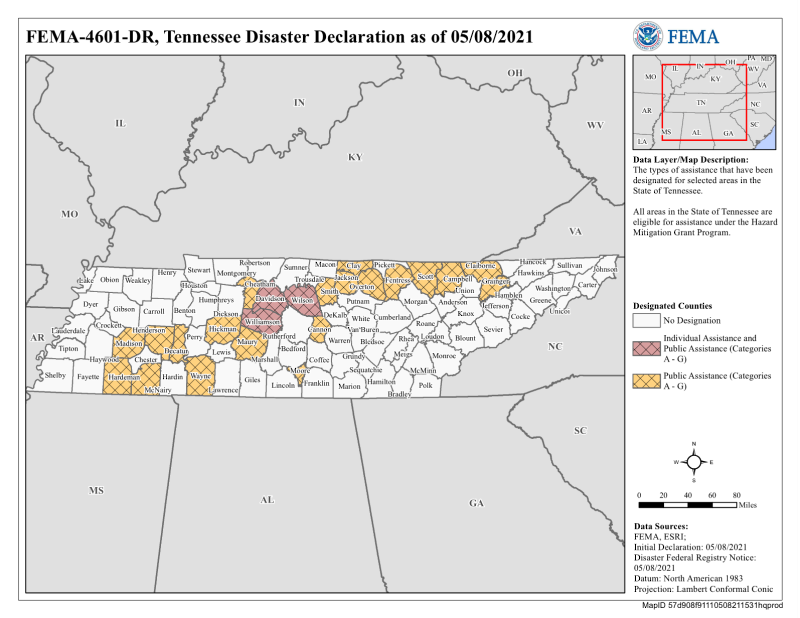 The new Aug. 2 filings and payment due date for affected Tennessee residents covers 2020 individual income tax returns that, before the disaster declaration, were due on May 17.

The extended deadline also applies to quarterly estimated income tax payments that were due on April 15 (good news for Tennesseans who missed that deadline) and the second quarter payment that would be due June 15.

In addition, affected taxpayers will have until Aug. 2 to make 2020 IRA contributions.

As for businesses, their various 2020 returns that normally were due on April 15 also now can wait until early August. This includes the quarterly payroll and excise tax returns normally due on April 30. The IRS also says it will abate penalties on payroll and excise tax deposits due on or after March 25 and before April 9 as long as those deposits were made by April 9.

Finally, affected Tennessee tax-exempt organizations that operate on a calendar-year basis and normally would file 2020 returns by May 17 now can postpone that task until Aug. 2.

Different disasters, same rules: Because it's been such a stormy 2021, diligent readers of the ol' blog (and I thank you) know what's coming now. Tennessee taxpayers and I thank you for your patience.

Tennessee taxpayers in the disaster declared counties who haven't filed their 2020 federal tax returns yet don't have to do anything special in connection with the extended Aug. 2 Tax Day deadline. The IRS automatically identifies affected taxpayers eligible for the special relief and applies the new filing and payment deadlines.

However, if you live or have a business located outside the covered disaster areas, but believe your circumstances also should be given special tax consideration, call the IRS disaster hotline toll-free at (866) 562-5227 to request this tax relief.

The relief also applies to all relief workers who are affiliated with a recognized government or philanthropic organization assisting in the relief activities in the covered disaster areas.

Sometimes the IRS' regular operations and its changes in connection with disasters cross paths. If that happens to Tennessee taxpayers just now getting word of their new deadline, the IRS says not to worry.

Tennessee disaster area taxpayers who get a late-filing or late-payment penalty notice for a tax task that now falls within the deadline postponement period should call the telephone number on the notice to have the IRS abate the penalty.

More major disaster relief: Some Tennessee taxpayers with the new Aug. 2 filing and payment deadline also will have another disaster-related tax decision to make.

Anyone who ends up in an area that FEMA designates as a major disaster can claim uninsured disaster losses on their taxes. And they get to decide in which tax year to claim them.

You can claim such losses on either the return for the actual tax year they occurred or the prior tax year. In picking your filing year, the key is to determine which tax year will provide you with a better tax result, generally a lower tax liability or larger refund.

That means the Tennessee storm victims can claim the late March/early April losses on their 2021 tax return they file next year. Or they can claim them on their 2020 returns that aren't due until Aug. 2.

Disaster-area Tennessee taxpayers who already filed their 2020 returns, but now find that they should claim their storm losses on that return, can file amend return by completing Form 1040X (and yes, you now can do so electronically!) and sending it to the IRS as soon as possible.

Another form to file: As I noted in my earlier post on considerations in making a major disaster tax claim, regardless of which tax year you choose to file your losses, you'll do on IRS Form 4684, Casualties and Thefts. It's then submitted with your 2020 tax year or 2021 tax year Form 1040.

To ensure that the IRS, which is already backlogged and slow getting to many (OK, millions of) returns, gets to your disaster claims as soon as possible, include the FEMA designation number on your return.

Tennessee taxpayers claiming a disaster loss in connection with the recent storms should put the disaster designation "Tennessee – Severe Storms, Tornadoes, and Flooding" in bold letters at the top of their Form 1040. Also, include the official designation number FEMA 4601-DR-TN on your return.

And, shameless plug alert, you also can find disaster tax tips, ranging from preparation steps to recovery options to how to help those in need, in the ol' blog's special Storm Warnings pages.

I say this all the time, but I sincerely hope you don't ever need to use any of my blog tips or IRS tax relief in connection with a natural disaster. But I've been blogging long enough and obsessing about destructive weather for even longer. Sometimes — too many times — Mother Nature just throws a destructive fit.

Disaster numbers: Natural disasters too often are reduced to numbers. There are the number of places they strike. The dollar amount of damage. And, sadly, sometimes how many people are injured or killed.

That last cited number is a grim reminder to take storms, whatever type is common in your area, seriously.

That's especially true in 2021, which already has had, from the tax standpoint, a half dozen major disasters. And we haven't event reached the start of the annual hurricane seasons.

When the IRS last month issued its fifth disaster relief notice, my #TaxTwitter pal Deborah Fox wondered if 2021 was notable for having taxpayers in five states being given extended tax-filing deadlines due to disasters.

Hi Kay, it seems a bit surreal that 5 of 50 states now have an extended IRS tax due date because of recent storms. Do you know of another time when we have had as many or more states? I can't.

After clicking through the ol' blog's archives, I found that last year as we approached the Oct. 15 extended filing deadline, taxpayers in six states were given delayed filing due dates.

With the Tennessee notice, 2021's Tax Day filing delay has met that half-dozen count, which is this week's By the Numbers figure.

The five preceding the Volunteer State with a 1040 filing due date beyond May 17 are:

To all these taxpayers dealing with disaster damage, carefully consider how the tax code can help with your storm recovery. You want to make sure you get the most relief you can.

Now, at least, there's no need to rush those claims.