Enjoying a comfortable retirement later means planning for and contributing to nest eggs now. For some, the Saver's Credit offers an added tax incentive. Some lawmakers want to make the credit even better.

In addition to the tax breaks available for those who take advantage of myriad retirement saving options, the Internal Revenue Code also offers a double reward for some with the Saver's Credit.

Plus, it might get even better if some members of Congress get their way.

Saver's Credit tax break bonus: This retirement tax break, sometimes referred to as the Retirement Saver's or Retirement Savings Credit for more specificity, is not new; it first appeared on 2002 tax returns. But it is too often overlooked.

In its current form, the Saver's Credit offers a bonus tax break for individuals who contribute to variety of already tax-favored retirement vehicles. Eligible taxpayers who put up to $2,000 into qualifying retirement accounts get a $1,000 tax credit.

The retirement accounts that count toward the credit include traditional, Roth IRAs and myRAs (remember those?); 401(k), 403(b) and other qualified employer plans (including the federal Thrift Savings Plan, or TSP); self-employed retirement accounts, including SEP (simplified employee pension) and SIMPLE (Savings Incentive Match Plan for Employees) IRAs; and Achieving a Better Life Experience (ABLE) accounts.

Can't come up with two grand? That's OK. You still could get a smaller credit based on your contribution. More on the amounts and claiming specifics in a minute.

Even better, this tax reward for saving for your post-work years is, as its name indicates, a credit. That's a dollar-for-dollar reduction of any tax you owe.

In the Saver's Credit case, it's a nonrefundable credit, meaning it could wipe out a tax bill, but not get you a refund of any excess credit. Still, no tax due is pretty darn good.

Saver's Credit income limits: The Saver's Credit was created to help lower- and middle-income folks who don't tend to contribute to retirement accounts. As any of us who've lived through some lean times can attest, when you're dealing with tight financial times, you tend to put more of your dollars toward current living expenses, rather than toward a far-away future.

The thinking of the Saver's Credit's creators was that a tax break now for people with such financial concerns would spur them to save at least a bit for later.

So the credit was designed with income thresholds to prevent higher-income earners from taking advantage of it. They are adjusted annually for inflation.

For the 2020 tax year — that's the one for the return that's due by Monday, May 17 — the Saver's Credit maximum earnings caps are:

Those 2021 amounts in parentheses are in case your finances have improved and you want to start or add to a retirement account this year.

Percentage calculations: As promised earlier in this post, once you determine your adjusted gross income falls within your filing status' earnings range, you get to figure how much of a Saver's Credit you get for your retirement account contributions.

The credit amounts are 50 percent, 20 percent or 10 percent of your retirement contribution amount, up to a maximum $2,000, based on your income and filing status. Again, in keeping with the goal to reward lower-income savers, the biggest tax credit goes to those in the lower Saver's Credit earnings bracket.

The table below shows the 2020 tax year earnings amounts that make you eligible for the various Saver's Credit percentages.

Remember, you can make an IRA contribution for 2020 by the filing deadline. That's May 17 for most folks, a bit later for others. Then you can use that 2020 contribution to claim, if you qualify, the Saver's Credit on your 2020 return.

So that you don't have to worry next year about filing season scrambling to make prior-year IRA contributions that could let you claim the Saver's Credit, here are 2021's inflation-revised income thresholds and how they determine your tax break amount:

The relatively simple form's instructions are included as page 2 of the document. 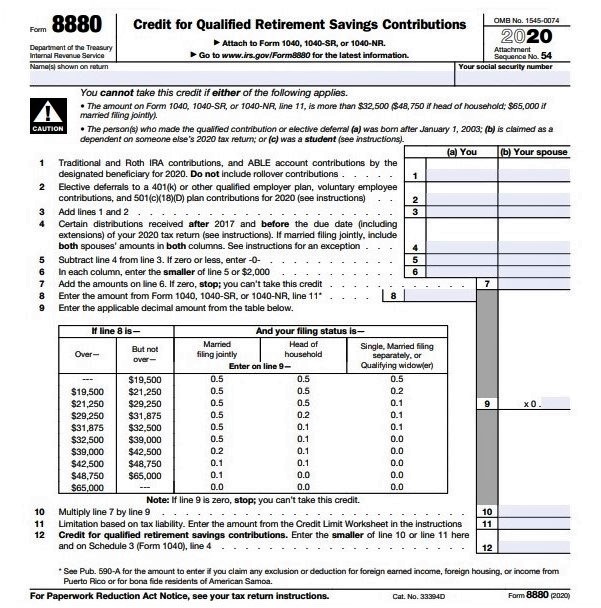 When filing jointly, each spouse can consider his or her contributions to these retirement vehicles.

Don't be put off by the percentages section (line 9) of the form. It's how to determine whether you get the full or partial credit. For most of us, our tax preparer or software will do the calculating.

Possible expansion, simplification ahead? It's also possible that Form 8880 soon will be revised for the better. A proposal to make claiming the Saver's Credit easier and available for even more taxpayers is gaining some traction on Capitol Hill.

The changes were proposed as part of the Ways and Means (W&M) Committee's bipartisan approval of another round of retirement (and tax) changes in the Securing a Strong Retirement Act (SSRA) of 2021. It's been dubbed SECURE 2.0 since it builds on the Setting Every Community Up for Retirement Enhancement (SECURE) Act that took effect Jan. 1, 2020.

The original version of the SSRA included provisions that would have created a single credit rate of 50 percent in place of the current, more complicated 10-20-50-percent tiered structure. It also would have increased the maximum per person credit from $1,000 to $1,500.

That section didn't make the cut in the SSRA bill that cleared W&M. The reason? The Saver's Credit changes and another excised provision dealing employee stock ownership plans (ESOPs) added costs to the overall bill.

Instead, the bill simply calls for the Treasury Secretary to "take steps to increase public awareness of the benefits provided" by the Saver's Credit and then report back to Congress on those public relations efforts.

But during the tax-writing panel's markup of the bill last week, some committee members expressed hope the proposed Saver's Credit changes would be addressed in future legislation.

"I think there is a role for the Saver's Credit going forward," said W&M Ranking Minority Member Rep. Kevin Brady (R-Texas). "I know there’s a bigger role for ESOPs going forward; there are a number provisions that had a significant score that, as we monitor the impact and results of this bill today as it becomes law, I and other members look forward to working with you, Mr. Chairman, and our Democrat colleagues in continuing to work and fine tune help where we can in these areas."

So, as the saying goes, stay tuned. And if you can, put money into your retirement account(s) and claim the Saver's Credit now.