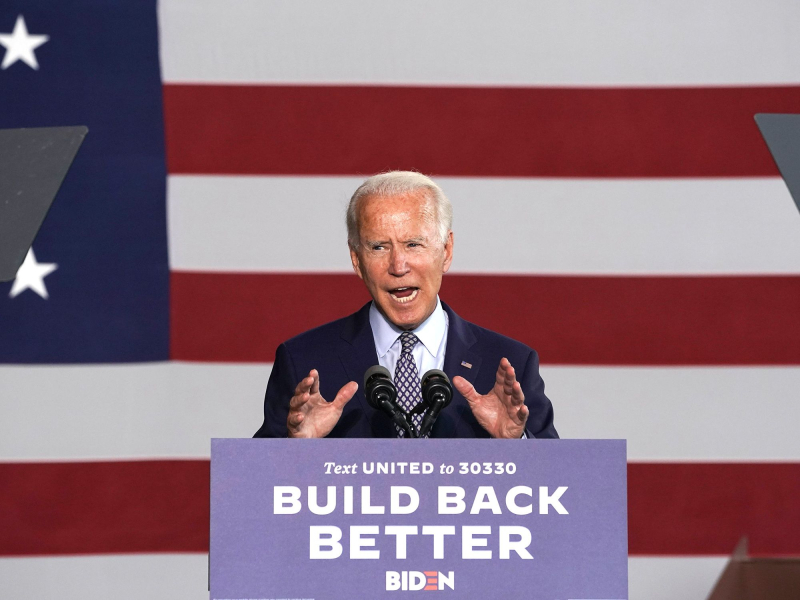 Joe Biden's campaign slogan "Build Back Better" now is part of his presidency's agenda. Many promises he made in 2020 now are part of the Biden Administration's first federal budget proposal.

President Joe Biden's first federal budget proposal, which is for the 2022 fiscal year that starts Oct. 1, comes in at $6 trillion, detailed in more than 1,700 pages.

The White House projects its changes will bring $3.6 trillion to the Treasury over the next decade. It also projects a $1.84 trillion deficit. That's a substantial number, up from 2019's $984 billion deficit, but a sharp decrease from the record $3.1 trillion in losses created last year by federal COVID-19 pandemic spending.

As with any Administration, the annual financial proposals basically are just a wish list. This White House wants money for infrastructure, clean energy, corporate research and development, and, of course, taxes to pay for all this are part of the plan. We heard most of this last year during the presidential campaign.

The tax and revenue proposals affecting individuals are in the section dubbed the American Families Plan. It already was released last month.

The biggies here include tax hikes on high-income individuals and making permanently ensconcing in the tax code some recent tax credit expansions that were part of COVID relief.

New, higher tax rates for the wealthy: High earners under the Biden budget proposal would see their top marginal income tax rate go from the current rate of 37 percent to 39.6 percent.

The 37 percent rate cut was part of the GOP's 2017 tax reform bill, the Tax Cuts and Jobs Act. It's already set to return to the higher 39.6 percent level in 2026. Biden would just speed that portion up a few years.

The 37 percent ordinary income tax rate for 2021 applies to taxable income that exceeds $523,600 for single filers and more than $628,300 for married couples filing jointly. Under the Biden proposal, the new 39.6 percent rate would take effect in 2022 on taxable income that is more than $452,700 for single filers and tops $509,300 jointly filing married couples.

As is now the case, the Biden bumped up earnings brackets would be adjusted for inflation in subsequent taxable years.

The Biden budget calls for individuals with adjusted gross income of more than $1 million to pay the proposed 39.6 percent rate on their asset-sale profits, too. The current top long-term capital gains tax rate is 20 percent.

Biden leaves in place the 3.8 percent surtax, the net investment income tax (NIIT) that was created to help pay for the Affordable Care Act, aka ACA and/or Obamacare. That would mean that the wealthy would pay a top rate of 43.4 percent on capital gains.

Opponents of the proposed investment sale changes also point out that high-earning taxpayers in some states could face tax rates exceeding 50 percent on their profits.

'When?' is the big capital gains question: A quirk — OK, gimmick — of the Biden proposal that's getting even more attention its timing of the new capital gains tax rate.

The Treasury document says it would be retroactive to the "date of announcement." The tax world is pondering whether that means the May 28 release of the budget or the April 28 publication of the American Families Plan provisions.

There likely are two reasons for such ledger legerdemain. First, it helps bulk up revenue in prospective budget number arguments. Second, it would prevent wealthy asset owners from selling off their holdings before the end of the year to avoid the hike.

Still, from a realistic tax planning and policy standpoint, retroactive tax law changes are never popular and rarely wise in practical application. The clichés about changing rules in the middle of the game or, as we say here in Texas, changing horses in the middle of [an income] stream, already are piling up on Capitol Hill and in financial and tax offices nationwide.

Keeping recent tax breaks in place long-term: As for tax breaks, most of which were created to help families dealing with economic problems created by coronavirus, Biden's inaugural federal budget also is looking at a longer horizon.

The budget, in part, calls for —

Funding for family-friendly policies is a big part of Biden's FY22 budget request.

Other budget items: In addition, Biden's financial framework for the upcoming fiscal year embodies some of his key campaign issues.

Far from law: Again, these are just a few of the many, many proposals, tax and otherwise, in Biden's fiscal 2022 budget. But they give us an idea of what is important to this new Administration.

Don't freak out or do a happy dance about any of the proposals just yet. They are just that. Congress will have the final say on what ultimately ends up in the upcoming federal budget.

Even with a nominal Democratic majority on Capitol Hill, expect some parts of Biden's proposal to be cut. That tends to happen to every president.

For now, just be aware of what will be debated and hunker down for the upcoming political and fiscal fights.

You can get details from the White House's six-page fact sheet/synopsis of the FY22 budget, the overview (72 pages) from the Office of Management and Budget, the Treasury Department's Green Book general explanation (114 pages), or the 1,422-page appendix budget document.

We've got numbers, lots of numbers: As noted, Biden's budget proposal is huge.

So which of the many, many numbers in the document earns this week's By the Numbers recognition?

Some of the items, even those that are garnering a lot of early budget attention, likely won't make it into law. Still, the budget is an interesting outline of the Biden priorities.

So I'm taking the safe route and selecting Fiscal Year 2022, whatever the ultimate dollars are provided to pay for federal programs during it, as this weekend's honoree.